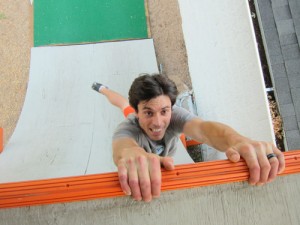 Training like a warrior to get fit, or dream of TV stardom.

That fact, that exercise is now about fun, can be felt while swinging on the ropes and bars of the new Warrior Playground at the Grit exercise studio at Wedgewood and Hover in Longmont, where owner Sam Banola has built an adult-sized jungle gym set, complete with zip-lines and plenty of opportunities for righteous injuries.

Here, you can even witness the final stage in the evolution of exercise, when working out will be not only fun, but an effort to become famous on television.

The Warrior Playground was inspired by NBC’s “American Ninja Warrior,” a reality show where physical mutants sproing and sail through obstacle courses so difficult howler monkeys give up halfway through. It’s putatively “ninja” territory, but it’s actually dominated by rock climbers and parkour athletes, including a lot of the Apex Movement crew from Boulder County and Fort Collins’s Isaac Caldiero, a rock climber who won $1 million on the show last season.

Here at the playground, as at other ninja gyms around Colorado, like Urban Acrobatics in Thornton and the Xtreme Obstacle Course in Highlands Ranch, people can train so that they’ll not only be in great shape and thereby live longer, but so they’ll live forever on YouTube.

Longmont resident Logan Wilson, 13, was at the playground the other day. He calls Ninja Warrior “the funnest sport I’ve ever done.” While other boys dream of a football career, Logan wouldn’t mind running NBC’s obstacle course for cash and prizes. Also there was Longmont dad Robert Cooper, whose age is some hearty multiple of 13. He was prodded into trying the sport by his daughter, who, watching the show, said, “Daddy you can win that!” It was a heartening display of childish faith in her father, a guy who is very strong for a balding IT guy but could not win $1 million unless all other competitors died in a neutron explosion. Cooper, for his part, isn’t here for fame. “I spend all my time in my head, thinking and solving puzzles,” he said, “and this lets me get back in my body.”

Owner Sam Banola is the man behind the gym. He started to watch the “American Ninja Warrior” show a few years ago, and was immediately hooked. He began training with Lorin Ball, now of Ninja Brand Parkour Gym in Henderson — and within a few weeks Banola knew he wanted to open his own ninja gym.

The phenomenon of a TV-inspired fitness fad isn’t entirely new. “American Gladiators” in the 1990s prompted many Americans to build jousting equipment in their home gyms. But the Ninja Warrior craze feels deeper and crazier. There are multiple companies offering to help you build your own ninja course in your backyard, the Wall Street Journal asked if ninja warrior is “the future of sports,” and it follows nicely from other obstacle-course phenomena like Tough Mudder and the Spartan challenges: all ways to get your workouts the way a dog takes a pill: wrapped in delicious peanut butter. 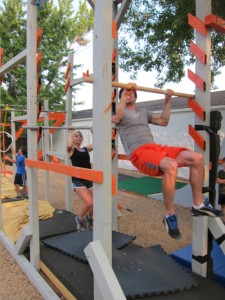 At his gym, Banola employs his own svengali of TV fitness. Paul Kasemir, a six-year veteran of the show, called on TV “one of the greats,” “Mr. Consistency” and “something of a celebrity,” who teaches classes while also prepping for next season.

I signed up for one of the classes at the Warrior Playground. [It’s the day after, and I am typing this with blisters on my hands the size of dimes.] Kasemir and Banola both taught. I and three other child-like adults trained for TV stardom — or, at least, a higher metabolism so we don’t put on weight while we’re watching TV stars.

Our first task was to swing from bar to bar, then zip-line back to where we started. Second task was a variation on monkey bars called the “floating monkey bars.” Third, climbing to and hanging from a hangboard. Fourth, the signature “salmon ladder.” And so on. On all these, we mortals struggled and fell and hurt ourselves. “All of us who do this all rip our skin,” said Monica Augustine, a mom from Lafayette who used to jog but now comes here twice a week. Meanwhile, Paul Kasemir, the certified ninja, defied gravity and did two rungs at a time to our one.

None of us in the class are going to the Ninja Warrior finals, except maybe Logan Wilson, 13, or Jase Hinrichs, 12, of Gunbarrel; kids who absolutely couldn’t get enough of the obstacles. Creationists who argue that humans aren’t descended from apes should watch Logan and Jase play in Sam’s backyard. The primate DNA is clear.

Eventually, we will breathe the dream TV fame, sleep it, eat it, probably make out with it. But for now, at the Warrior Playground and others, you can at least workout to the dream of being on television. Plus, if you ever do get on TV, and the camera adds 10 pounds, you’ll still look sweet.