Five Questions with Coheed and Cambria 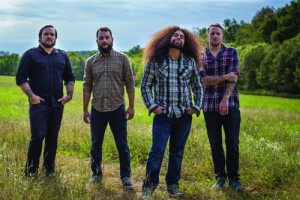 Yellow Scene: The Color Before the Sun is a fantastic departure from what we’ve come to expect from Coheed and Cambria after your epic Amory Wars anthology. Talk a little bit about the composition and production process and how it differed from everything before it.

Coheed and Cambria: Aside from the album being outside the concept it had a completely different approach in the recording. Every song was tracked live. The songs, especially Claudio’s lyrics, were already very honest and had a very heart on sleeve vibe. The live recording just added more to that vibe in the sense of each of us performing out parts right there on the spot blemishes and all.

YS: What are the three things you know now that you wish you could go back and tell yourself 15 years ago?

C&C: Stay in the moment. Process things and feel them out but then let them go. Harping and stewing on things over and over won’t change a thing. Start practicing moderation wig things now because in 15 years habits will be harder to break.

YS: Delivering a real concept album is a lost art at best — you guys managed to churn out a true epic that resonated with critics on every outing. What advice would you offer others before launching into their concept projects?

C&C: If the the story and the music are good enough that they stand on their own the combination of them together should make for something appealing.

YS: Now that The Color Before the Sun broke the mold, how do you follow this one up?

C&C: I have a feeling the concept will come back in to play. That’s really up to Claudio and what direction he wants to take things in. I just look forward to making music with everyone.

YS: Who are you listening to these days?

C&C: I really like the new Black Mountain album

YS: Describe your dream project — any artist, any era? Who’s in your group and what are you exploring, musically?

C&C: I want to write or perform on a song that’s in a Daniel Tigers Neighborhood episode. My 2-and-a-half-year-old son loves that show more than anything. It would bring me good dad status.