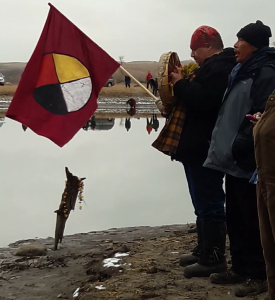 If you’ve read any memoirs of people’s time at Standing Rock, you’ve most likely concluded that it was a very special place to be a part of. I spent around four days there myself, and identifying as a middle-class to poor white girl from the city, it seems Standing Rock should have been an out of element experience for me, but in all honesty, I felt a very strong sense of belonging; like a calling that I had to stay. Alas, I couldn’t stay, though I wanted to so badly, but due to my lack of resources and prior responsibilities, I was destined to go back to Denver.

Although there is always something for me to do in most spaces I go into, at Standing Rock I actually felt an honor and desire to do my best with everything I sought out to do; a satisfaction, I am sad to admit, I rarely have found in the contrived; colonial, capitalist, city lifestyle I’ve been used to. It felt as if I had been given an opportunity to “start over” in a way in which I could learn and provide in a balance that was beneficial to myself and to people that I was grateful to be around. But by the end of my journey, I had realized, that there is a great importance in finding similar senses of value in the places where myself, my friends and family live. It seems that I needed to be a part of an experience like Standing Rock in order for me to realize the importance of that truth; of Loving Always.

Standing Rock helped me see the true interconnectedness of nature, and it helped me realize that when we participate in standing together for the cause of spreading love and healing throughout the entire Earth, by actively living to understand what is needed in order to save our planet, by reconnecting to what it means to be human and to live within the natural systems and cycles of our planet’s healthiest states, we come to realize the power of the people. 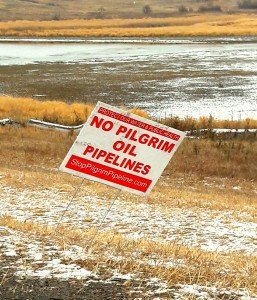 I have begun to live, building the realization. No war can be won because war is eternal, and peace can be within and without us all eternally. We must spread the awareness of transforming our systems, as it has been captured by capitalist greed, breeding negativity to permeate the energetic landscape. Just because we have the opportunity to understand what could happen in the future when we learn new things, does not mean we should seek to dominate the present. Those in capital and colonial control of the planet have that control because they have sought to dominate, and implemented systems that have killed and enslaved all forms of life-systems and beings of life in order to maintain their popularized monocultures of exchange. Our multidimensional spectrums of Human-to-Earth communities have been infected with monochromatic symptoms of disease spread by a hijacked mycelial nature of culture and resource control. Like the blue-stained pine beetles that kill the pine trees. Resulting in oozing wounds of cities-stabbed upon our motherly landscape; a land that once had nothing but epidermal-print grooves of the many dimensions of life that roamed upon her.

Standing Rock was not the beginning of my learning of the interconnectedness of nature, but it was my first collective experience of acknowledging, participating in and honoring its influence and capability to spread a loving understanding. At Standing Rock, when I saw and tasted the tears coming out of a red-wooded tree that De La and I chopped for firewood, I cried. Flashes of history’s gore reminisced throughout my dimension of life, as if for a moment I relived experiences once locked in the unconscious. I wonder if the great sacrifice of lives killed un-honorably for greed is now awakening in the spirits and experiences of today’s people; given a rebirth to guide healing our planet back to its positive-nature-states. That campfire that kept me from freezing in the night, not just in Standing Rock but since the beginning of my spirit life-time. This knowing, that has always been in our peripherals, is working hard to be unveiled, and those who are Native indigenous have known these truths consciously for centuries, truths that all beings can come to understand, in loving always.

While in Standing Rock, I kept a liquids-only fast. I drank coffee with cream and sugar, and benefited with great delight from Lexine’s amazing pozole broth. This was quite an accomplishment for me, as I have been struggling with addictive behaviors around food for quite some time in my life now, but I managed to keep my liquid-only fast, until I got back into Denver. The day we were to leave Standing Rock, my beloved crew went out to seek Buffalo burgers, and I stayed behind by the car and meditated with the stick I had gotten from Turtle Hill at an action day two days prior.

I was filming and taking pictures at the Non-Violent Direct Action site of resistance at the sacred Turtle Hill. The police were stationed on top of the hill, looking down upon water protectors, and used psycho-linguistic tactics to try and evoke us. For example, a police officer warned us to take off gas-masks because it showed them that we are “aggressive”, as if that justifies a probable cause for their violence, and to make it seem like we’re the violent perpetrators. Of course, protectors did yell back that they would take off their masks if the police would in turn stop using the gas on them and get rid of it.

An adorable puppy dog ran up to me with the stick; a black shoelace tied at the top of it. The pup wanted me to throw it so they could fetch, but because there were people and the river in front of and around me, I decided not to throw it. I tried to play tug-of-war and hand the stick back, but the pup wasn’t interested and kept dropping the stick in front of me. So I figured I was supposed to keep the stick. It was quite a nice height for me, rising just above my hip; the palm of my hand resting snug upon the top. The black shoelace tied to the top of it reminded me of a medicine-being’s staff. I felt honor and responsibility in my heart as I held the woody fibre, and kept it with me throughout the duration of the action.

As the Elders sang and played the drums delivering loving intention into the skies with their vibrations, I kept rhythm with the stick, with intent of delivering the loving vibrations into the ground beneath; tapping in unison with the drums. I had also brought my Malachite Turtle Stone with me, that my mother had given me as a gift from South Dakota when she visited Mt. Rushmore. I held the turtle in my left hand as I tapped the stick in the right. After the action, the stick and I headed back to camp.

So as I sat there, a few days later, paying attention to the stick again, as I held it firmly, and imprinted my dedication within it, placed it with its palm-rest facing Turtle Hill and it’s land-side facing me; I chanted Mni Winconi, Agua es Vida, and Water is Life in my head and with all of my loving being — joining the collective of people that were meditating together in spiritual unison from all around the world that day, in the unified destiny of saving Earth’s water. I did not want to leave Standing Rock, but even though I did physically, every time I must remember the importance of saving our water, I think back to that meditative feeling and close my eyes, and I try to remember; to keep the connection.

I could not shake the feeling that because it looked so much like a medicine stick, and that I honored it like it was one, that I was being culturally appropriative. So I left my stick in the dirt at Standing Rock instead of bringing it with me. It has been very difficult trying to balance my white privilege and white guilt in ways that don’t cause me to self-destruct. I am trying to balance what I feel I am meant to pursue and making sure that I don’t harm the movement and make sure to remember that people of color are the leaders of their liberation, and I will do what I can to keep from hindering any part of this (r)evolution. I truly dedicate myself to Loving Always in the name of Healing our Planet.

There is so much work to do, so much love to share; actions and awareness to be spread and built upon. So much pain to reveal and set free to heal. The children are the future, we must raise them with love and respect for all life and truly cherish them in these times of mass transformation. It’s time to get to know our communities and start building the future we want for our children. The awesome Natasha spoke to the need for us to reconnect in our communities quite well in her article memoir of Standing Rock.

I do have fear for our new administration. But without fear we would not know courage, just as we do not know light without darkness; and know love without pain. Together we must tap into the collective energetic catalysts of love that seek to change the direction of the eternal war. No war can be won, as war is eternal, it is the mixing of opposing energies that give us this life to begin with. But there can be a lead within the time-line of the energetic space, and since colonized industrialization and the globalized “new world”- our energetic space at this time has been hijacked by greed and the masking of the interconnected truth; the negative. It is time for us to campaign its unveiling. But there are so many questions. What is the meaning of death in the name of love? What does removing the small central-force that creates a massive harm mean to the whole? What does the non-violent warrior of peace do when they face the disease of our times?

I ask you please to ponder such inquiries. Ponder with the intention of love in your heart; seeing the end goal of the unknown as a matter of loving success, no matter how stark the inevitable may seem. Be prepared to face the darkness of fear and greed with the light of love and understanding from within you. I will face it with you, all of my relations, together our loving leads will shift the energies of the eternal war, in time and space we will live to tell, and die to see. Standing Rock is everywhere, in our hearts and souls, in our neighborhoods, in our communities. We must visualize and then build together, the decentralization movement. The sustainable movement. The movement of honoring life and of loving understanding. This is the time where we find the philosopher’s stone within us all, to bring us back to the truth of nature. We must learn to defend our communities in the name of love and the positive forces of understanding.

May these positive forces be with you always, Mitakuye Oyasin, Love Always, Mni Winconi. If you do not know what these sayings mean, please learn, my dear friend Maggie wrote a great article pertaining to such important intricacies of intention.