Voices: Time for a New Normal 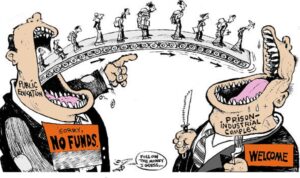 As African-American men, we are deeply disheartened and saddened by America’s continuous tolerance for racism as illustrated in this year’s presidential debate and election. To hear the historical “Law and Order” and “Tough on Crime” rhetoric in 2016 triggers a pattern of trauma in our bodies at a cellular level. For decades, poor and low-income communities, specifically those of color, have suffered a disproportionate burden of environmental, social, and economic impacts on our quality of life as a result of “Get Tough” politics and policies.

During this election process, we experienced a sequence of disturbances fueled by an all too familiar story filled with triggering language, behaviors, and archaic rhetoric. More troubling is the racial underpinnings that influence this narrative leading to over-criminalizing, policing, and incarceration in our neighborhoods.

The degradation of our people is not new in this country. The historical link to current-day examples is not a stretch but in fact part of the very foundation of our experiment with Democracy. People of color still experience systematic suppression in schools, voting, health, and justice.

From the birth of slavery to post-slavery, practices such as the Black Codes, Jim Crow laws, the Southern Strategy, the war on drugs, mass incarceration, and contentious abuses by law enforcement are steeped in racism. For us and many others in communities of color, the issue has continued to heat up until it is now a boiling pot of outrage and disgust not unlike what our ancestors experienced in 1865, our elders during the Civil Rights era, and what our children confront today. Whether it’s implicit bias from arrest to sentencing or the arbitrary notion that black, brown and indigenous people commit more crimes and are criminals, there is a consistent disproportionate racial impact that is often ignored, refuted, or completely dismissed.

The non-recognition has devastating consequences; such as a lack of access to livable wages because employers view people of color as criminals or incompetent or both. A lack of quality education because black and brown kids are considered delinquent and often suspended, expelled, and trajected into the juvenile justice system at exponential rates in comparison to their white counterparts. As a result, this becomes a barrier to accessing higher education. This marginalization contributes to the neglect and blight of our communities.

For those of us who have this experience, it is physically and psychologically crippling to our families and community and there is often a lack of compassion for the complexity of this oppression by those who are not directly impacted. We are at a critical point where real solutions are needed. Taxpayers are underwriting the cost of so-called public safety which is the veneer for this oppressive construct. This approach has done little to prevent crime, address racial discrimination, reduce disparities, and more importantly reconcile and repair the harm that has been done to people of color. When you have been a victim of poverty, violence, trauma, and police brutality like my colleague Alex and I both have, we can no longer tolerate 20th Century solutions offered by those who have created this problem.

We need real solutions because our lives and quality of life is at stake. We must act now and speak truth to power by working to eliminate the cognitive dissonance that promotes superiority in any race, gender, or ethnicity. We need to work to eliminate all forms of overt discrimination when it takes place. The ongoing dissonance promotes hate-mongering which is illustrated by acts of violence and discrimination against people.

Secondly, we must re-prioritize spending of taxpayer dollars by local, state and federal government into developing infrastructure in communities devastated by the overuse of the criminal justice system. This work requires a real investment of public dollars directly into communities of color and those funds need to be managed by those communities. Millions of dollars are needed for investment into small-business, housing, education, and more importantly services to truly help re-stabilize and restore our communities.

If there is not an unyielding commitment to support reconciliation and investment that matters, there will be ongoing backlash from our community. We must continue to stand up and speak out against this perpetual cycle of oppression that has us on a path of becoming morally and financially bankrupt.