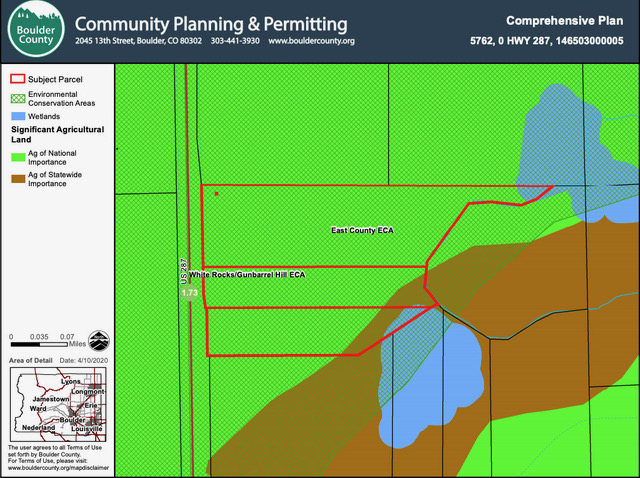 Jane Meyer is a local home owner and concerned citizen. She wrote in to share her thoughts on the proposed Boulder County Compost Facility at Rainbow Open Spaces. The thoughts and opinions expressed are her own.

If you travel along Highway 287 north of Lafayette, between Lookout Road and Highway 52, you’ll see the old Rainbow Nursery and Tree Farm. It is 40 acres of agricultural land that includes two wetlands. It’s also recognized as “agricultural land of national significance” by national, state and local governments. In 1994, Boulder County used Open Space tax money to purchase a Conservation Easement and First Right of Refusal from the owners of the nursery for $169,625. The purchase was presented to the taxpayers as a way to protect for perpetuity these 40 acres as open space for us to enjoy.

In 2018, a third party made an offer to buy the property for $985,000. Boulder County exercised its “First Right of Refusal” and, using Open Space tax money once again, purchased the property subject to the perpetual Conservation Easement. The County proclaimed the land to be the Rainbow Open Space.

What was not made public was that County planners never intended the land to be open space in perpetuity. Instead, Boulder County Public Works was apparently quietly planning to take this supposed open space land for industrial use. Public records now disclose that Public Works has spent over a million taxpayer dollars to commission the design of an experimental industrial composting plant with the ability to accept 125 million pounds a year of animal manure, food waste and “bio-solids”, which is treated human waste. Erie and surrounding neighborhoods are less than three miles downwind from this proposed facility.

In October of last year, Boulder County notified twelve residents who live in close proximity to the Rainbow Open Space of the project, and invited them to attend a meeting to discuss the project. Supposedly due to the pandemic, the general public and residents living in adjoining neighborhoods – many of which will be significantly impacted by the plant – were not invited. To date, no public hearings have been scheduled. Instead, preparations for this massive project continue behind closed doors.

Note that the official County Composting Facility website states that, “Comments on the project (designs, location, concept, etc.) can be submitted at any time using the channels provided below. All comments will be provided to the project team, the Planning Commission, and the Board of County Commissioners for their review.” You can access that here. This does not substitute for a public hearing, whether in person or virtual. City of Erie is hosting a virtual hearing on Tuesday, February 9. Info below.

The lack of government transparency is now becoming obvious and the “backdoor” method of acquiring the property under the guise of open space is suspect on many different levels. What are the impacts of a facility like this? The odor factor in eastern Boulder and western Weld counties leads the list! Other impacts include water, air and noise pollution, not to mention increased heavy truck traffic on highway 287, surrounding highways and county roads. The waste will not only come from Boulder County but will be trucked-in from up and down the Front Range, adding to greenhouse gas emissions. Impacts in other communities have been widely studied.

What if Boulder County pushes this through the review process (which they control, hook, line and sinker) and it’s built? Who will be the watchdog for uncontrolled odor and pollution, increased traffic accidents, and waste haulers frustrated with traffic delays who find shortcuts through neighborhoods and less-used county roads? Who will force Boulder County to stop when the inevitable problems arise? For more information, please visit www.ProtectRainbowOpenSpace.org and make your voices heard.

Editor’s note, via the city of Erie: The Town of Erie Board of Trustees, during their regularly scheduled Board meeting, will be hosting a public hearing on topics related to the Boulder County Compost Facility. The Board will not be deciding on matters, but are encouraging the public to participate in the public hearing portion of the virtual meeting on Tuesday, February 9. The general meeting begins at 6:30 p.m., and the agenda will be posted in the agenda center. To comment in advance please see the ‘How to Participate Document’ and send written comment to townclerk@erieco.gov.