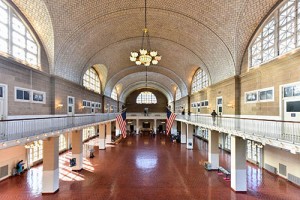 My mother’s father was the only grandfather I knew. My father’s father died when Pop was a child, and by the time I was born, the closest thing I had to a paternal grandfather was a kindly Russian immigrant who was my grandmother’s “friend” for many years.

But they never married, and I shared no blood with him, so all I had was Grandpa. William Cohen, “Wolfe” in Hungarian. I remember him as a broad, sturdy man with a very thick Hungarian accent, kind eyes and a smile that always made me happy.

My grandfather William Cohen — “Wolfe” in Hungarian — was born in Hungary in 1905, and came to America just before the Holocaust. He had 11 siblings. Most of them were murdered by Nazis.

After World War I, the resulting political unrest from the Hungarian split from Austria, and the economic devastation that the post-war devastation had caused charged up Antisemitism all over Eastern Europe. Jews were already being beaten and murdered in the streets and Hitler was rising into power. Wolfe was bound for America.

However, the Ministry would not approve Jewish requests for travel documentation, and without it, Wolfe would have been held upon his arrival and sent back to Hungary. Which, for Jews, was a death sentence.

So he jumped ship.

Several miles off of the coast of Ellis Island, Wolfe quietly slipped into the Atlantic Ocean and began swimming. Even though he was was an Olympic-class swimmer, navigating the open sea was admittedly the hardest physical endeavor he’d ever faced. But he conquered it, and several hours later, emerged dripping wet and physically exhausted onto the shores of New York.

There, Wolfe was reunited with Sadie Greenwald, who had been but a child when he’d last seen her in Budapest. She’d grown into a stunning young woman, and the two were wed soon after. On Mother’s Day in 1947, as my own mother was being born (unbeknownst to him), INS walked into my grandfather’s paint shop and apprehended him for his immigration status.

Wolfe didn’t lie. He laid out the situation plainly in his accented-yet-excellent English. He had been a Civil Watch Commander during the war. He was a taxpaying citizen with a family who now had deep roots in Forest Hills, New York. And so they brought him to Canada, had him re-enter legally and placed on probation for a year. After that time, he was allowed to apply for — and gain — naturalized status.

This is the story of refugees. And this is why, when we watch the White House offer a Holocaust Remembrance Day message without a mention of Jews or the “Final Solution,” then cap that with an executive order to ban refugees from the ISIS holocaust in the Middle East, it’s beyond upsetting.