Farm-to-Table In Every Way Possible 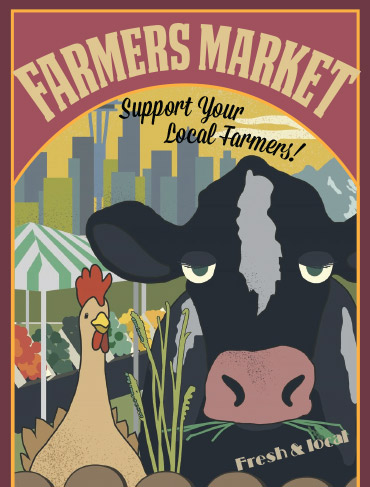 Whether you were born and bred in Boulder County or, like many of us, implanted from another part of the known universe, the unknowable forces of destiny have brought you to a known foodie paradise, ripe with specialty cuisine options like farm-to-table. But for residents of BOCO, farm-to-table is more than a passing food trend, it’s a lifestyle.

Kevin Kidd, executive chef at 24 Carrot Bistro in Erie, places the start of the farm-to-table movement’s “mainstream” introduction to Boulder County at around 2000. His first encounter with it was around then at Chautauqua Dining Hall, where the chef at the time stressed the importance of supporting local farms. But the kitchen staff didn’t know what to do with pounds upon pounds of green beans, or whichever crop it happened to be that week. “It really threw us out of our element,” described Kidd laughingly. “It was definitely not refined at all.”

Perhaps because of this lack of refinement, many consider The Kitchen, which opened in 2004, to mark the beginning of the movement in Boulder County. Multiple media sources have hailed its cofounder, Kimbal Musk (brother of Elon Musk) as a founding father of the farm-to-fork movement. According to Courtney Walsh, who has worked with Musk for the last decade, “Boulder was the perfect place to incubate The Kitchen,” Musk’s European-style farm-to-table bistro. “They were truly considered one of the first restaurants to work with local farmers,” Walsh stated.

While Kidd’s experience with Boulder restaurants sourcing from local farmers predates the Kitchen, he also recognizes their place in the movement’s history: “They took it to another level,” he explained. And talking with Walsh, you can understand how: “Even our tables are from a local woodworker,” she said.

Of course, elements of farm to fork existed in Boulder County before it ever landed in restaurants. Eric Skokan, owner of Black Cat Bistro and the farm that supplies around 95 percent of the food you see on their tables, believes that restaurants have cropped up as a response to the already-burgeoning movement away from processed foods. After all, the farmers market in Boulder has been around since 1987, and the multidimensional benefits of local food on economy, health, and environment have been recognized by certain fringe groups since as early as the 1960’s, when the pendulum of culinary culture started to swing back from convenience, mass production, and processing.

Bradford Heap, chef and proprietor of Salt and Wild Standard, remembers his first brush with a back-to-basics food ideology in 1987 at culinary school. “That nutrition class was the first time I woke up,” he explained, referencing discussions on high fructose corn syrup and other nightmares of the processed food world. “I think chefs have a responsibility to step up awareness,” Heap stated, but he recognizes the challenge in doing so, especially with a facts-first approach: “It doesn’t get people excited about food. It’s like a sermon.”

Maybe that’s why farm-to-table restaurants have played such an integral role in the growth of the movement toward healthy, local food. They showcase the beauty of local food, remind us of its value, romanticize it, in a way, and fuel us with their passion for it.

Skokan also believes restaurants have been a “huge catalyst” for the widespread adoption of this ideology, and went on to discuss how they’ve inspired customers to support the farmers markets, and even grow their own gardens. “15 years ago, that was exceedingly rare,” Skokan noted. “It really was just for your crazy aunt, but now it’s for you.” 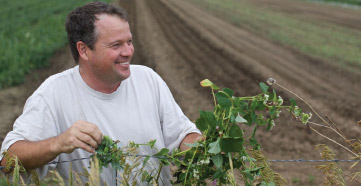 Chef Gray Tattershall at Community in Lafayette was born only four blocks from the restaurant and agrees that these restaurants have encouraged a certain cultural shift. “You go through Lafayette, everyone’s got a garden bed in their front yard,” he explained. He went on to say that “the whole farm-to-table thing is getting bigger by the day,” both in terms of its presence in restaurants and the lifestyle it’s encouraging locals to pursue. “I think it shows people what we can do as a community.”

Colorado now boasts over 100 farmers markets every week during the harvest  season across the state from Cortez up through Fort Collins. Erin Dreistadt, owner of Aspen Moon Farms, notes the growth that’s happened in areas that have previously been on the periphery. “The Boulder farmers market has always been big and supported, but the Longmont one growing so much says a lot about this part of the county.”

The movement has also helped shape other local changes. Following the establishment of the first farm-to-table restaurants, Boulder County began a 10-year EAT LOCAL! Campaign in 2007 to raise awareness of and support for regional farmers. Shortly after, in 2008, our local government created the Boulder County Food & Agriculture Policy Council which planned to reclaim 10 percent of the open space for agricultural leases. These efforts sought to build a healthier community and a more resilient foodshed. Measures haven’t stopped there. The farmers markets now accept SNAP food stamps, and some schools, especially in the Boulder Valley School District, are making use of local food in lunchrooms. 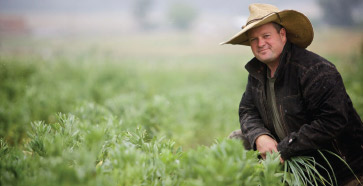 Three Leaf Farm supplies a select group of restaurants around Boulder County, and co-owner Sara Martinelli noted that movements like farm-to-fork are somehow natural to this region. “The idea of farm-to-table and of local food and organic production – all of those things are so quintessentially Boulder and northern Colorado,” she explained.  “It’s just a great model here.”

The thing about changing the world is that it takes more than a model, it takes a revolution. A handful of food fanatics isn’t enough to overthrow processed food or establish a sustainable local agriculture. People have to support it; consumers have to choose it. Heap claims that part of the problem is a change in priorities: “The percentage of our income that we spend on food has gone down from 15 to 8 percent,” he said. “I think the only way it’s going to work is if everybody takes responsibility in what they’re supporting.”

“It’s our job to help get the word out there that you have power as a consumer,” he continued. “The best thing people can do when they go into a restaurant is ask questions. Don’t be a chicken.” Don’t be afraid to be selective about the foods you consume and to think deeply about how they affect the community, the earth, and your body. If you don’t like what you find out, it only proves how crucial it is to keep pushing.