Boulderites Get a Taste of Sustainable Oysters 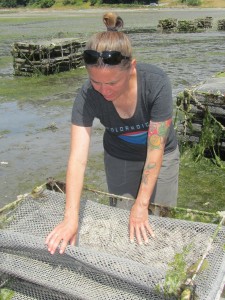 “The Chesapeake Bay was polluted, over-fished, kind of run down and the ecosystem was falling apart,” recalled Sheila Lucero, executive chef for Jax Fish House. “But I’ve seen firsthand in the Chesapeake how oysters are bringing the bay back. Oysters are one of the keystone species where we’ve seen them bring habitat back to life in areas that didn’t have anything going on.” The complicated process of farming and bringing the oyster to polluted bodies of water has paid off, as the little guys are born to filter water. Each one can filter up to 50 gallons of water a day, so they’re more than just delicious; they’re good for the environment too.

“In the Chesapeake Bay, all these great grasses are growing, tons of crab, tons of fish all live in this area that they haven’t for a long time. All that is because the oysters are there, cleaning the water, really helping the environment there,” explained Chef Lucero. “They take a little while to grow, but within 18 months you have a mature oyster that can go to market.” Locally, of course, you won’t find wild oysters. But clever people have found other ways to harness the power of the oyster. “You can also reuse their shells. You can compost them, they’re great for soil. We were sending shells to a guy, he was using oyster shells to create a new drive way, he kind of paved it, so there’s tons of uses for shells later on. But for sustainability, they themselves are very sustainable and they are great for the environment.”

And while bringing seafood into Colorado isn’t exactly buying local, you can take solace in the benefit they provide elsewhere. “For me, I’m from Colorado, and I know that these are delicious, they are good for you. I know there are tons of oyster farms on both coasts and the Gulf that are producing these things and all of them are helping the environment. These are really sustainable agricultures.”

Chef Lucero and Jax Fish House have tapped one such aquaculture to source its oysters. “We have our own oyster called the Emersum Oyster that we partnered with Rappahannock River oyster based in Virginia.” Founders Travis and Ryan Croxton are third generation oyster farmers and have built a family empire on replenishing oysters and providing them to restaurants along the eastern seaboard and beyond. In Virginia, restaurants recycle oyster shells, which are then aged, re-seeded and put back in the Chesapeake Bay and its estuaries to give the oysters a head start.

The Croxtons actually approached Jax, over a meal, about their oysters. “We went out there, talked about their farm, and they took us to different areas that they have water rights to, where we found an oyster that we thought would be good for Jax,” said Lucero.

The single source means Jax can offer half shell offerings with a consistent size, taste and texture. The geography of oysters is part of the appeal. Each region, or different side of an island, creates a unique flavor and feel. Spruce Farm & Fish imports sweeter Kumamoto oysters from California and brinier Blue Island oysters from New York. The Raw Bar at Wild Standard offers several varieties of oyster as well, including Diamond Point, Damariscotta, Kumamoto and their own briny Wild Standard variety grown in Virginia.

But to enjoy those flavors, don’t you have to eat them raw? “I always tell people there is no wrong way to eat one,” Lucero said. “I’m not an oyster snob at all. I’ll put hot sauce on it, I’ll eat it with lemon. It’s really all about what you prefer in the moment.”