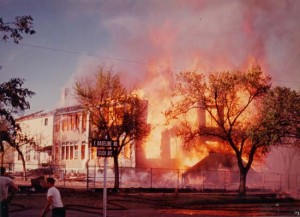 The Lafayette Elementary fire was so hot, it melted the windows of businesses across the street.

Ask any longtime resident of Lafayette, and they will remember the day Lafayette Elementary burned down. They will even remember where they were, or what they were doing when the rising smoke plumes were seen from miles away.

Fires have been the bane of towns since the dawn of civilization, a fact that has only changed in the past few generations. Before occupancy limits, sprinkler systems, and safer building materials, a town’s wooden buildings often erupted into unstoppable conflagrations.

In 1900, Lafayette’s business district burned down in a matter of hours. The fire began in a small livery stable, and spread through wooden buildings placed only a few feet from each other.

Lafayette firefighters faced an additional challenge. Until the 1950s, the pipes that ran water under Lafayette were made out of wood. These wooden pipes leaked more water than they carried, resulting in low water pressure. Firefighters relied heavily on “bucket brigades”, local residents who would come to the scene of a fire armed with a bucket of water.

On May 17, 1964, the old Lafayette Elementary was being torn down. The building was largely wooden, with wood school desks piled high in the center of each classroom. To avoid the expense of sanding the old hardwood, the flooring had been given a thick coat of oil. Finally, the temperature that day had reached a record-setting 92 degrees. The exact cause of the fire remains unknown, but the conditions were perfect for an uncontrollable fire.

The Lafayette Elementary fire was so hot, it melted the windows of businesses across the street. Smoke from the fire could be seen from ten miles away. All across town, the sky rained down a thin, grey ash. Lafayette’s new fire station had been built three blocks away from the old elementary school, but one of the fire engines failed to start.

The fire at the old Lafayette Elementary marked the end of an era for many. It was the school every coal miner had sent their children to, or had gone to themselves. Former students remembered the school’s stairwell which   held a giant, multi-story Christmas tree during the holidays. As with the closing of the Black Diamond Mine in 1956, the fire confirmed that Lafayette’s days as a mining town were behind it.