The city of Longmont is looking like it might go green with a “special marijuana tax.” Since 2011, retail medical and recreational marijuana sales have been banned within city limits, but recent actions by Longmont City Council suggest that may soon change.

In 2009 Longmont adopted a 90-day moratorium on the “acceptance, processing and approval of any application for a city license or permit for the operation of any business to acquire, possess, manufacture, produce, sell, distribute, dispense, or transport medical marijuana within the city”. 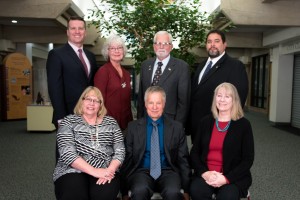 Longmont City Council, 2017. Photo: Courtesy of the City of Longmont.

This moratorium was extended twice through 2010 and became a ban in May 2011. At that time there were seven dispensaries in Longmont that had to close their doors despite filing petitions, restraining orders, and even attempting to sue the city. At the initial hearing , the council listened to an hour and a half of public commentary from medical marijuana patients, dispensary owners and citizens — both for and against the measure. The council voted 7-0 for the ban, but public opinion was much more divided.

In 2013 Longmont City Council amended the initial ban to include recreational marijuana in response to Colorado’s adoption of Amendment 64, which legalized recreational marijuana. It seemed like all hope for Longmont bud-lovers had gone up in smoke, but things changed. In early 2016, Longmont City Council authorized the formation of an interdepartmental task force—with members from Police, Fire, Planning, Code Enforcement, Finance, the City Attorney’s Office and the City Manager’s Office—to collect information and offer recommendations about overturning the municipality’s marijuana industry ban.

To complement the findings of the interdepartmental task force and gather additional residential opinion, the City Council delayed further discussion on lifting the ban until the results of the annual Longmont Customer Satisfaction Survey were collected and reported. In November 2016, in response to the preliminary question, “To what extent do you support or oppose the limited retail sales of recreational marijuana in the City of Longmont?” more than half of respondents were supportive and only 33 percent were strongly opposed.

These results at very least, solidified the City Council’s reconsideration of the cannabis ban and potential retail sales. On April 18, 2017 staff recommended the Council only consider recreational sales and to continue the ban on medical retail sales. This recreational-only twist was motivated by the Council’s attempt to reduce the risk of underage sales and also increase revenue potential for the city.

In July, staff laid out details about what lifting the ban and allowing recreational marijuana shops might look like. They gave suggestions and recommendations regarding topics like application fees, the number of shops that should be allowed, and the potential implementation process. Discussion included distance from schools, whether they should be allowed in downtown storefronts, should they have a lottery application process or review them for most “qualified”. It’s unlikely the town will be overrun with recreational marijuana vendors, as it seems the majority of Council members support limiting the number of shops within city limits to four and a non-refundable application fee of $15,000.

On this November’s ballot, voters will be asked to approve a “special marijuana tax” of 3 percent, which would apply to all retail cannabis products. This would bring in approximately $600,000 in city revenue, but the terms of the bill would allow the Council to increase that 3 percent up to as much as 15 percent without a public vote. This tax includes the condition that 1.5 percent will be earmarked for affordable housing. (Note: If the rate were raised to 15 percent – only 1.5 percent would go to affordable housing and council would have authority to budget out the rest.) If this ballot measure passes, it will have no end date; if it fails, there will be no “special marijuana tax” on the books.

At the moment, both the city’s approval of recreational marijuana shops and the subsequent appearance of the “special marijuana tax” on November’s ballot are up in the air; however, both seem likely. Council appears to have motive for doing business in this way. Councilmember Sarah Levison said, at the May 21, 2013 meeting where the they banned dispensaries, “We’re not ground zero for this one. … We can always repeal a ban. When one of those things gets started and someone else gets sued first, we can learn from that experience and do it the right way.”

Longmont City Council decided it would rather let other communities experiment with marijuana commerce before it allowed dispensaries and it definitely seems like they want all the numbers crunched and in effect before any retail ban is lifted. For Longmont residents and visitors alike it appears that recreational sales are inevitable; it’s a matter of working out the details first.