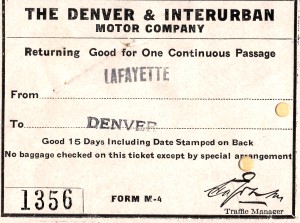 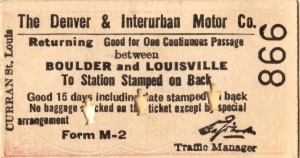 This Labor Day marked the anniversary of one of the worst disasters in coal field history, when two commuter trains collided north of Denver. The year was 1920, and it heralded the end of the Denver Interurban Railroad, which connected the towns of the Northern Coal Field to the big cities.

Yes, my friends, over 100 years ago, there was an extensive and popular commuter rail line between Boulder and Denver. It operated from 1908 to 1926, and was even electrically-powered.

The Denver Interurban Railroad began operating in 1908. The Denver Post at the time reported a trip from Denver to Boulder now took a mere 55 minutes. In the summer, the line continued on to Eldorado Springs, the “Coney Island of the West”.

The Interurban also served the coal-mining towns of Louisville, Superior, Marshall, and Lafayette, which at the time had a reputation for deadly duels and saloon brawls. There are stories of commuters ducking under their seats as the train pulled into Lafayette.

The Interurban held special importance to coal miners. Most miners walked to work, sometimes to mines six miles away. With the Interurban, miners were no longer limited to jobs within walking distance.

On a hectic Labor Day, 1920, a train full of baseball fans left Louisville, headed for a game in Denver. At the same time, a train left Denver, with riders bound for a long weekend in Eldorado Springs. The Denver train departed before the track was cleared, and the two collided at Globeville, where I-25 and I-70 now meet. Twelve people were killed, half of them from Louisville, and over two hundred were injured. The resulting damages led to the Interurban’s collapse by 1926. By then, cars and buses had gained popularity. Buses and bus stations are easier to build maintain than untold miles of rail.

Over ninety years after the Interurban’s closure, RTD continues to push for a commuter rail system to service east Boulder County. RTD says the line should be finished by 2042.

For more stories from the history of the coal fields, visit the Miners Museum at 108 E. Simpson Street in Lafayette. We are open Tuesdays, 7 PM to 9 PM, and Thursdays and Saturdays 2 PM to 4 PM. To schedule an appointment, please call (303) 665-7030.