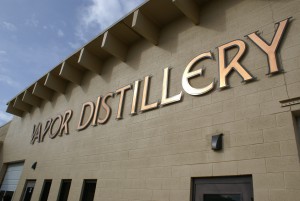 “The Boulder Vapor Distillery (BVD) started 10 years ago,” Alastair Brogan begins. He’s an imposing man, given his height, but you quickly realize he’s a smiler, a story teller, and the kind of guy you want to have a few rounds with. Genial and easy to talk to, he quickly winds tangential tales together for us, about his life in Scotland, his love of distilling, and his current passion project at Boulder’s Vapor Distillery.

“Ted took over from the original founder, who was a lawyer…” Alastair enthuses.

The Ted he’s talking about is Ted Palmer, owner and Master Distiller. “The distilling experience served Ted well during his Navy tour as a mine field navigatore,” their website notes, an unenviable job if there ever was one. Also, this makes BVD owned and operated by a certified American hero.

Alastair was a military man for 10 years himself, having joined the Royal Air Force and taking an interest in combat survival, before leading his family business to international success over the next 15 years and marrying an American.

“When Alastair met Ted Palmer, he was utterly impressed with his knowledge, passion, and his incredible talent for distilling,” and a partnership was formed.

“Ted had started with a very small still” Alastair continues. There are around 1500 distilleries in the U.S. and probably about a thousand-two hundred use that small size. Why? “Because once you’re under 240-250 gallons, you don’t have to conform to the same health and safety laws” that would govern a bigger operation, he says. We would guess that there’s also the allure of being a “small batch” bourbon or scotch maker.

“Most American stills are designed as a column and they are designed for maximum proof as fast as you can. Scottish stills are different;
we can only get up to 170 proof. 20% of water that carries over is what gives it the taste. So that’s why whiskey has got eitherbarley taste, rye taste, or sweet corn taste.”

Importantly, when deciding if you should rush out to north Boulder to get a bottle of their single malt scotch, Boulder bourbon, or Ginsky, you should know that there is only one company in the world that makes the type of copper stills that BVD uses. It’s called Forsyths, a north Scotland legend. Arriving in February of 2015, 125 years later, their handmade 1500-gallon Scottish Copper Pot still is gorgeous and almost singular in the American distilling landscape. 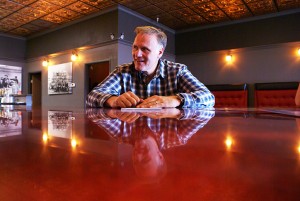 Alastair joined BVD three years ago, when “vapor was mainly doing gins,’ he says. “I met Ted and went to every distillery in Colorado to talk to people and went on their tours, sussed it out. We become partners. I moved my still, so we now do the gins and we do the whiskies. Our whiskey has just been launched [this past October 22nd]. It’s a very unique whiskey, very unique bourbon. Bourbon is 50% corn and whatever the hell you want after that. Ours is 51% corn, 5% rye x and 44% malted barley. I’ve spoken to so many people nobody knows about the 44% x. It tastes very different from something like a Breckinridge… We did this for two reasons. First of all we wanted to be completely different from everyone else. And secondly our process allows us to do this much easier, to do the malted barley.”

“We have the third highest single malt whiskey capacity in the United States. Behind Virginia distillery who hasn’t gotten a single bottle of whiskey out yet. And Westlands, who is out of Seattle.” What BVD is doing is nothing short of major for whiskey world wide, and game changing in the United States. 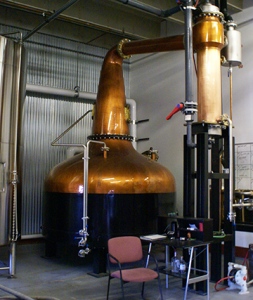 Alastair always had a passion for whiskies and process. Combining love of distillation with the genius of Ted Palmer, and the spectacular water here in Colorado, they’re making brilliance. This was supposed to be a part time job, because he has other businesses in the UK, but passion takes precedence for Alastair and BVD is now a full time project.

Right now BVD is netting, per tonne, about 3 barrels. They’re getting about 2.75 right now. Per Barrel, that breaks down to 300 bottles. Their experimental batches, of which there are several, are called Boulder Born.

It doesn’t get more local than that.