Jason Hall: A Director on the Up and Up 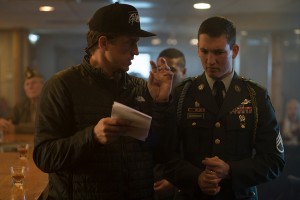 Writer/Director JASON HALL and MILES TELLER as Adam Schumann on the set of DreamWorks Pictures’ “Thank You for Your Service.” The drama follows a group of U.S. soldiers returning from Iraq who struggle to integrate back into family and civilian life, while living with the memory of a war that threatens to destroy them long after they’ve left the battlefield.

Writer-director Jason Hall began his Hollywood career as an actor, but in spite of stints on Buffy the Vampire Slayer and numerous other shows, he found his way to life as a scribe. You might have heard of a little picture he penned called American Sniper. Now, he’s back with his directorial debut, Thank You For Your Service, a true story and a spiritual sequel to the journey he began with Sniper.

Yellow Scene: On the surface, this film is about heroes returning from war, but it’s also an unflinching look at the fallout from their work. How did that thread come to define the story?
Jason Hall: The thing I hope people extrapolate from this too is that … this is not isolated to the military. This is trauma. Trauma is universal. At some point in our lives … we’ll have a loss. This is really a universal movie about trauma and the way we cope with that, and the way we get through it.

YS: You had Adam Schumann and others involved on set — how did that help you tell this story?
JH: I think that any time that you can invite that legitimacy into a project, it lends itself to honesty and to an honest portrayal of every element of the story. My objective with this film was to cut to the bone of the truth. To have them there is totally valuable. 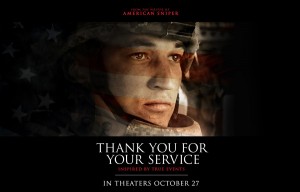 YS: This is no small task for a directorial debut, how did you know you were the right person to tell it?
JH: I really thought that Spielberg was going to direct it up until the very end, up until the week that I finished it. When I found out he wasn’t … I pitched myself. This was probably the hardest script I’ve ever written and I’ve put a lot of time and effort into it. I first encountered the book a couple of months after Chris Kyle was murdered. You can do the math, but that was a long time ago. It took me finding it and then going away and making Sniper first [to get it right].

YS: Masculinity and bravery and the societal constructs around those concepts seem to be present in every frame of this film. Why were those themes so important to highlight?
JH: These guys go over there and they’re trained and taught to walk into bullets and to shoot at human-shaped targets, so that they can take a life, ultimately. We turn them into these blunt instruments to win wars. We ask them to kill to win wars. Then they come back and there is no re-acclimation. There’s no untraining of things we trained them to do, and to seek help has always been seen as a weakness. To me, what Adam Schumann did in opening himself up to allow David Finkel to follow him around … The act of sharing, the act of asking for help and allowing David to chronicle that struggle and journey of his was as heroic as anything he did over in that war. As heroic as anything anybody did in that war, for my mind.