SUPPORT LOCAL MEDIA-DONATE NOW!
The International Sportsmen’s Expo hosted their 41st annual show in Denver from January 11-14. Attracting almost 100,000 attendees with an economic impact estimated to be in the millions, it’s one of the biggest outdoor events in Colorado. The show hosts hundreds of national and international exhibitors from all outdoor industries and helps vendors attract new clients, as well as new sponsors, if you’re one of the little shops out there.

We chatted with Karin Miller, owner of Zen Tenkara Fly Fishing in Loveland, on the expo’s bustling opening day. Karin was 110% smiles, passion, and know-how. She designs, manufactures, and sells Tenkara rods, lines, and accessories, and is working on manufacturing her own line of fully American-made Tenkara rods. 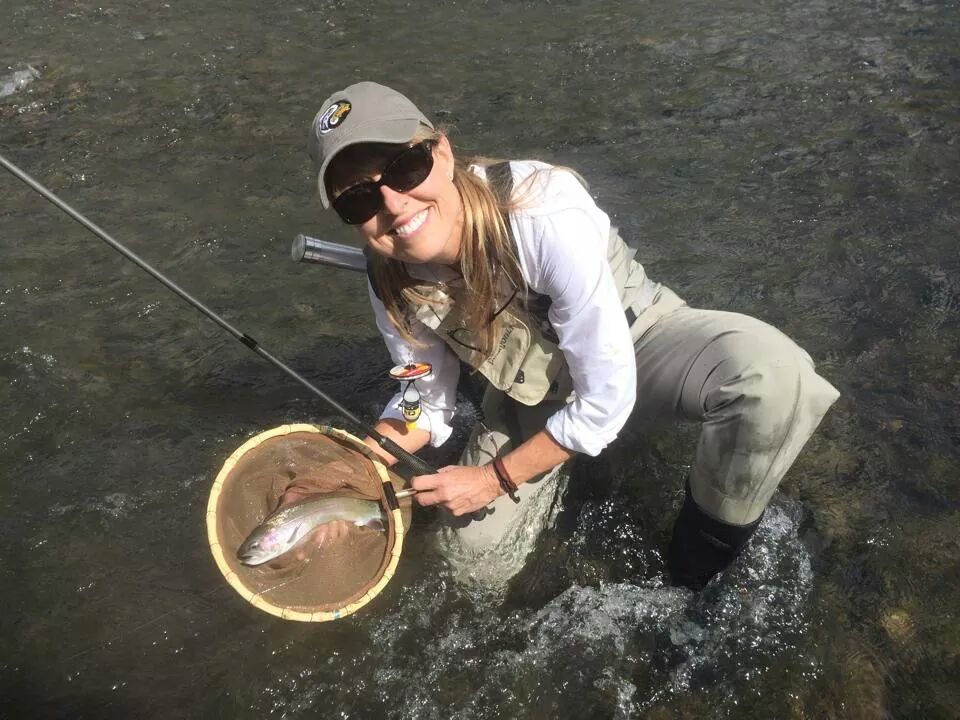 But let’s start with some history. Tenkara is the ancient Japanese method of fly-fishing, which uses only a rod, line and fly, according to TenkaraUSA.com. Tenkara has a very long, but undocumented, history. Originally the domain of commercial anglers in the mountain streams of Japan, the “first [Western] reference to Tenkara fly-fishing was made in 1878” as the observation of a British diplomat, TenkaraUSA says.

First of all, what is Tenkara? Were you already a fly fisher before Tenkara? It’s a fixed line method of fishing; it’s been around 1000 years. It came over to the states around 2009 and I had exposure to it early on. I [had exposure early on], but I was ‘eh, meh’ about it. You know, I would fly fish but I was not passionate about it. Partly because it felt a little overwhelming. It wasn’t very friendly for females back then. And I didn’t do it enough to keep all the knots and the setup and flies in long term memory, so I felt like every time I did it I was relearning it. 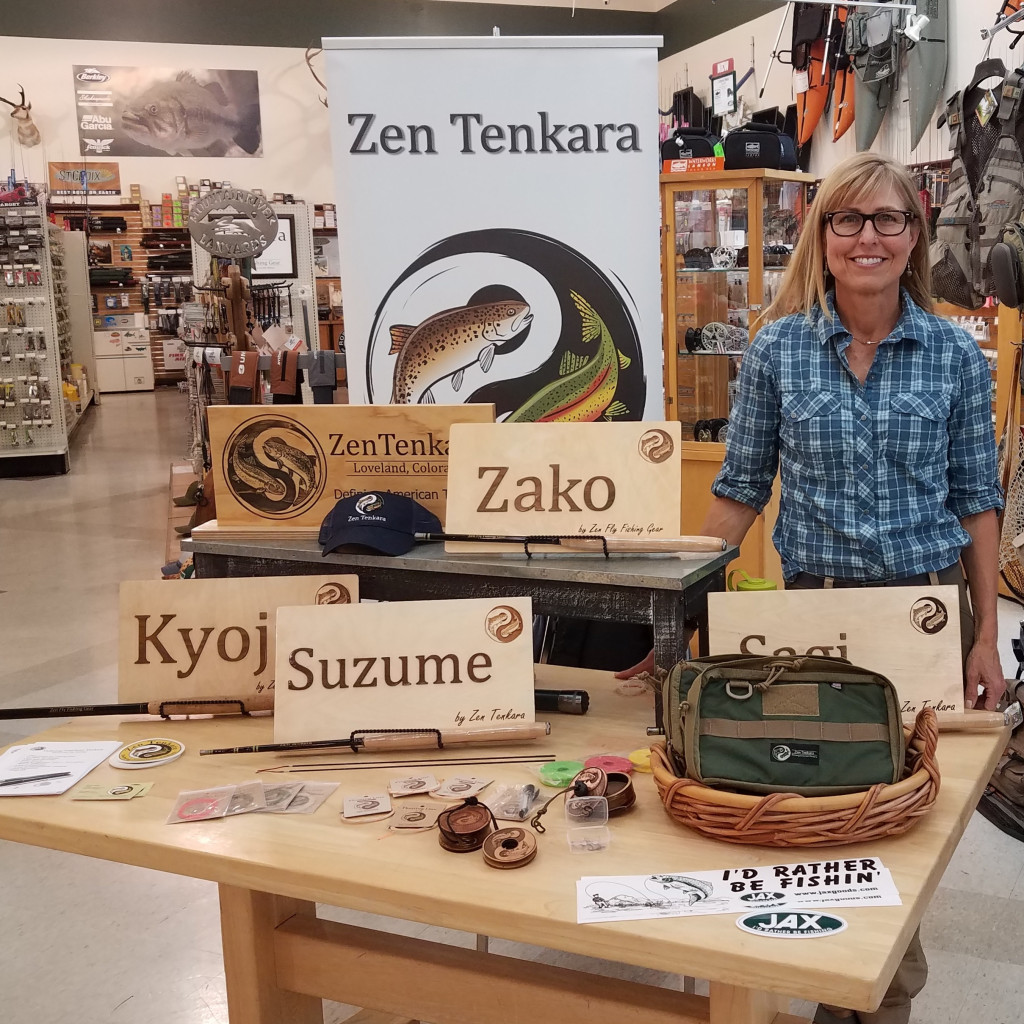 Tenkara is super quick. It’s just a few moments to set up. It’s really transportable. And it was really just such a great, effective method that I started fishing more. It’s not easier, but it’s more simple. It was more user friendly. I felt like I was able to fish more and improve my skills. I just fell in love with fishing, through the Tenkara method.

When you say it wasn’t friendly for females, what do you mean? I think the fly fishing industry has changed. Recently, there’s been recent articles about women being the largest growing demographic in the fly fishing industry. And it used to be, when you walked into a fly shop, you weren’t received very well, or were treated in a way that felt a little condescending. It was tough. There were only a few shops out there that made you feel welcome and were willing to help you learn. It was hard to get into fly fishing if you didn’t grow up with a dad or grandfather that passed that skill down to you. But it is changing. The industry is changing. There are a lot of women of all ages that are finding it’s a great sport. 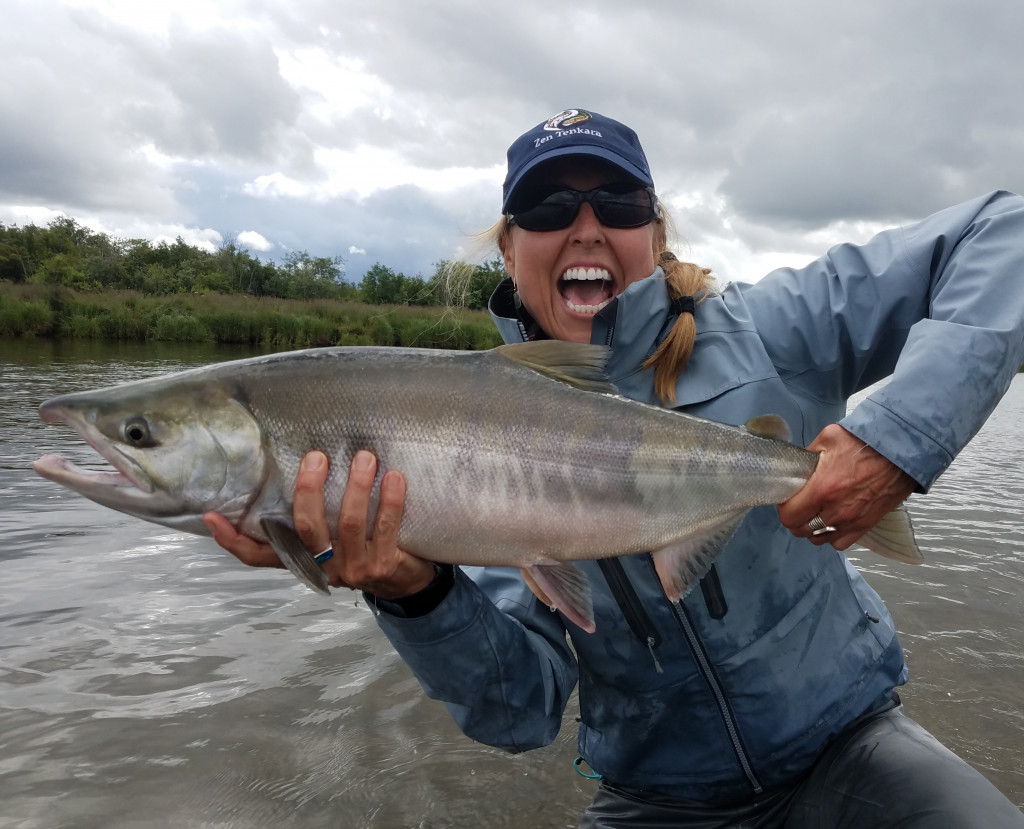 A lot of guides and instructors are often better casters because they listen, they’re more accurate. You have a lot more female guides than ever before. There’s another female-owned rod company here in Colorado, SaraBella (helmed by CEO April Archer), and she was just recognized for her accomplishments. Besides her, I’m the only female-owned rod company out there.

So why Loveland? That’s where I live. I’m originally a Miami girl. I’m a saltwater, Bahamas girl. My father lived on a boat. When I moved to Colorado I had to find water, so that’s also why I picked up fly fishing. I’ve been here since ’99. 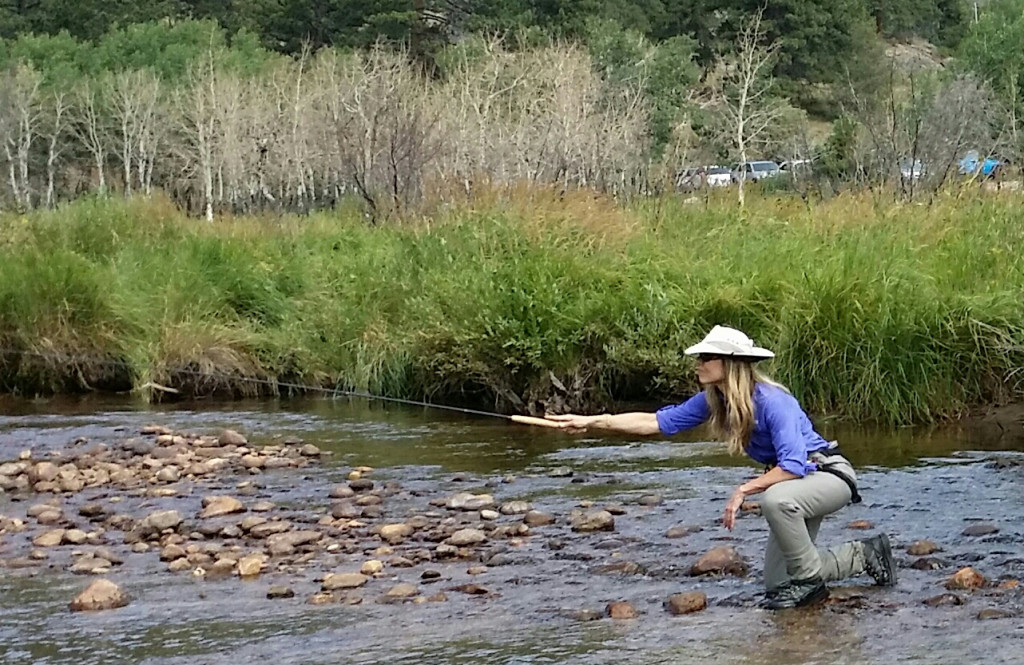 How long has Zen Tenkara been in operation? We’ve been around since 2012. I believe we’re the second Tenkara company in the states. It’s been run, run, run. Even in the short time that Zen has been around, there has been an evolution, so to speak, in people’s perceptions of Tenkara and what the method can do, and I really hope that Zen and I have played a role in that change.

What is the manufacturing process? Right now, everything except our rods are manufactured locally. We’ve spent two years designing a fully American-made rod. We own the only set of Tenkara mandrels on US soil. We’ve been rolling blanks for two years now but about eight months ago we switched from carbon fiber to a special kind of fiberglass, so we just did tests on our fiberglass rod blank this fall. We dialed in the flex and the strength; now we’re reducing weight; it’s been a huge undertaking.

When do you anticipate your rods being manufactured locally? We spent a whole year failing and realizing that it’s a completely different animal. Tenkara rods are the gumby rods of the world. We literally had to stop the process and say, these are the specs of the rod we want to produce. Now we have to reverse-engineer mandrels to create it. Nobody had made a Tenkara rod in the states. We’re working with an [unnamed] rod manufacturing company who were curious and willing to take the plunge. 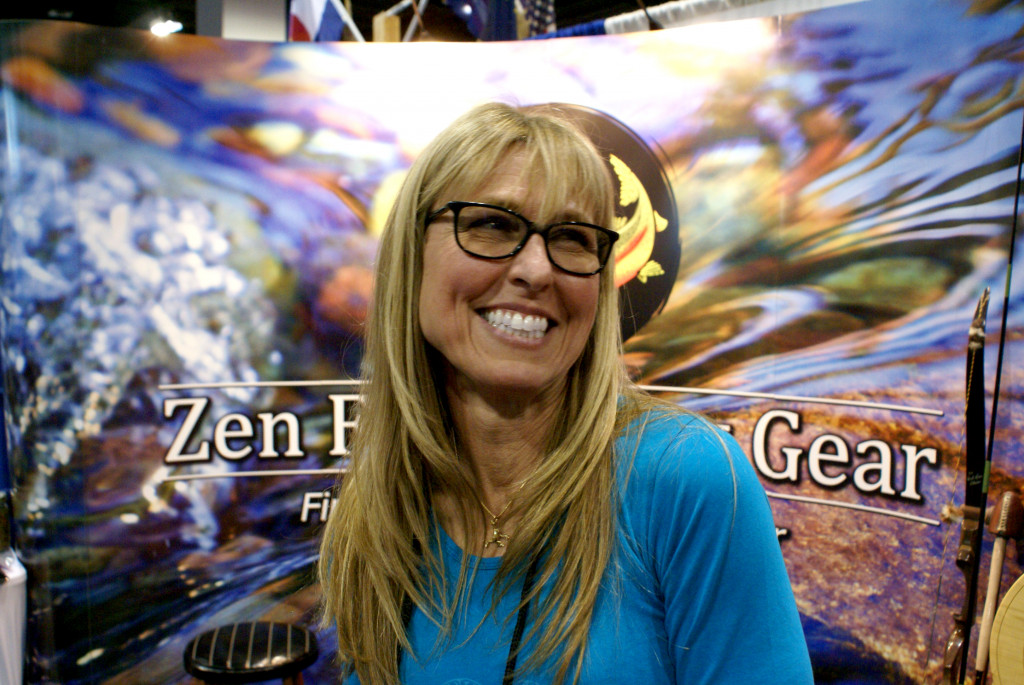 It sounds like you’re on the cutting edge of an ancient sport. That’s a great way of putting it.

How has that been received in the broader community? The broader community loves it. They’re really curious. The Tenkara community? Ehh. There’s a lot of traditionalists who really don’t like the fact that I’m attaching a regular fly line to a Tenkara rod, or that I’m targeting shark or chum salmon. They want to be able to draw a line and say, ‘That’s not Tenkara. That’s a fixed line fly fishing.” I say, tomato, you say tomahto.

If someone wanted to get into Tenkara, what should they do? There’s tons of resources on the internet but it’s always good to get hands-on experience, so if you can work with a shop or specialized or certified Tenkara guides, or instructors, that helps. It’s pretty intrinsic. It doesn’t take a lot to learn. The cast is pretty easy. You can go to a park and play. The more you get into pushing the size of the species and adding longer lines, the more finesse and skill management it takes. You can contact us directly. We love meeting up with people. We do presentations at different organizations. I’m a real person and I love answering questions. 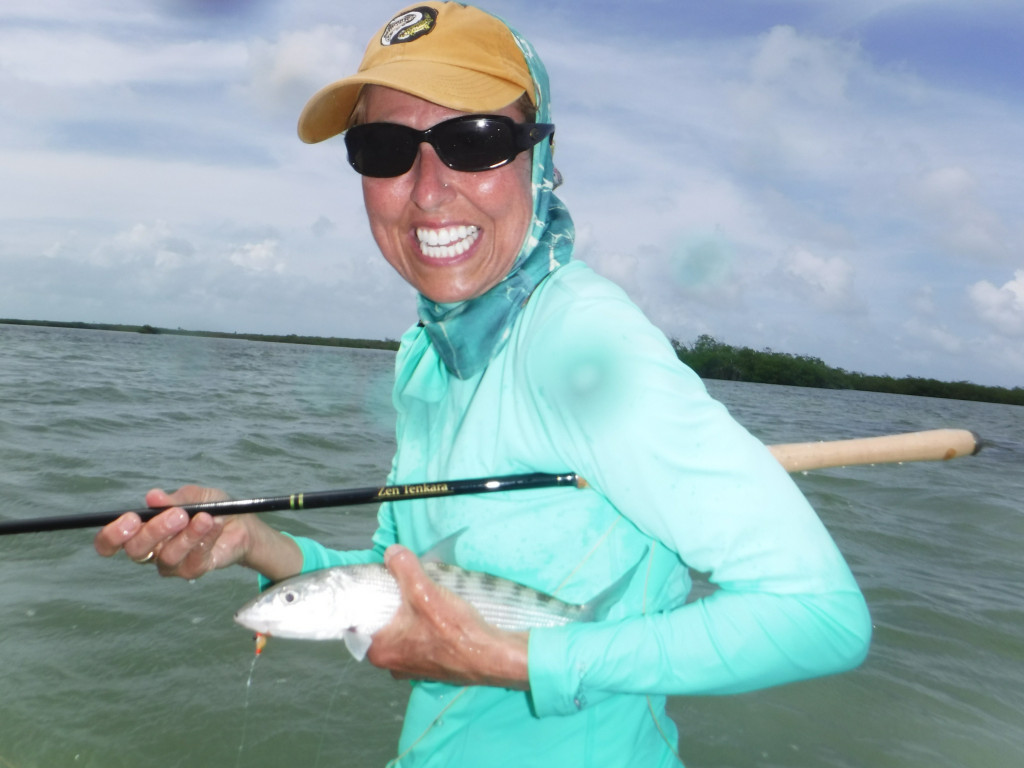 Which is the best lake or stream to start in? I live in Loveland, so Big Thompson, RMNP, those are my home waters. The Poudre River is kind of my home. St. Vrain and Indian Peaks are beautiful places to fish. Boulder Creek. All of those places are great. But you know, going to Alaska and catching a chum salmon on a Tenkara rod is an adrenaline rush that’s hard to beat. Or bonefish down in Mexico, in Ascension Bay, is a good way to spend a weekend, too. I’m hoping to target Golden Dorado, in the Amazon, next winter. I’m hoping to work with a lodge down there to see if we can land pacu, peacock bass, and my bucket list fish, the golden dorado.

Your heaviest catch? The heaviest [fish landed] was up at Rapids Camp Lodge, Alaska. I was up there this July and we were doing salmon, sockeyes, silvers, big rainbows that were coming up the Naknek [River]. I landed a 20 lb chum. I was invited up for eight days of fishing and training them on Tenkara. The guide said it totally blew their mind, landing these huge fish without a reel. These are guys that fish in Patagonia in the winter and Alaska in the summer. That’s their life. They kinda took me with a grain of salt when I showed up there with no reel. But at the end of eight days, they said it was the most fun they had ever had fishing or guiding anybody before, and that the cast was easier but that the fish management and landing skills involved actually took more finesse. So it’s not just fly fishing for dummies.

So you’re pushing the sport. I am pushing.