Emancipation Theater Co has a hit with Honorable Disorder 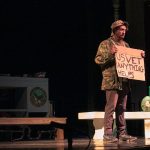 My parents were huge theater fans, even having season passes, so I have seen a fair bit of theater in my lifetime. Some I have thoroughly enjoyed and then there are the few that, well, my seat becomes rather uncomfortable after a bit.

That is not the case with Honorable Disorder. This is one show where I wanted to stay glued to my seat.

If you have a veteran in your life, an addict, someone you know who is homeless (or even that homeless person you carefully avoided), someone who has health issues and is struggling with the crushing costs of medical care, rising rents, or dealing with mental health issues and is struggling to navigate the lack of available support, or someone seeking to be an ally for POC, this is a story that must be seen.

All told, this is one of the best stories brought to life on stage that we have seen in a long time. When asked what his plans are for taking it bigger, Director and playwright Jeff Campbell says he has no plans to take it anywhere because he wants to make Denver a place to come see work like this. His hope is to create powerful, Black community performances that put Denver – and Emancipation Theater Co. – on the national map. 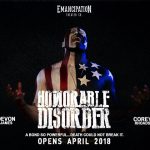 Campbell was a rapper for Denver’s Kut-N-Kru, along with Gary Martinez and Mike D. Chill, which went onto national recognition as one of Denver’s most influential hip-hop acts.

The quality of performance, production and script parallels anything you might find in the Big Apple (we know, we’ve been), but being homegrown and dedicated to telling a Denver story, that is easily, equally relatable across the country, is what makes this show as compelling as it is unique.

DeShawn Foster (played by the commanding Theo Wilson), struggles to find work and adjust to his return to civilian life. He spends much of his time in Mestizo-Curtis Park at 32nd and Champa, trying to help Justin (played by Corey Rhoads), the only other surviving member of his platoon during Operation Iraqi Freedom. Justin is now a heroin addict and homeless.

DeShawn’s mother, (played by Erica Brown) is facing being removed from her 5 Points home to make way for developers, what locals would call gentrification. Due to health issues and medical costs, she struggles to make ends meet.

DeShawn’s uncle (played by Jeff Campbell), serve’s as both the play’s comic relief, as an ex-boxer and womanizer, to this very poignant story. 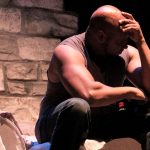 Through DeShawn’s journey he meets a social worker, Samantha – from Boulder (played by Devon James), who has to learn many lessons to understand what it means to be a real ally.

The story is beautifully scripted and the performances are captivating. Not only does this play think about issues that are present in everyday life and often overlooked, it will also really make you want some good Peach Cobbler.

Denver is lucky to have the creative talent that brought this magnificent story to our stages.

With shows like this, Jeff’s goal of putting Denver on the map nationally could very well come true. Bravo.