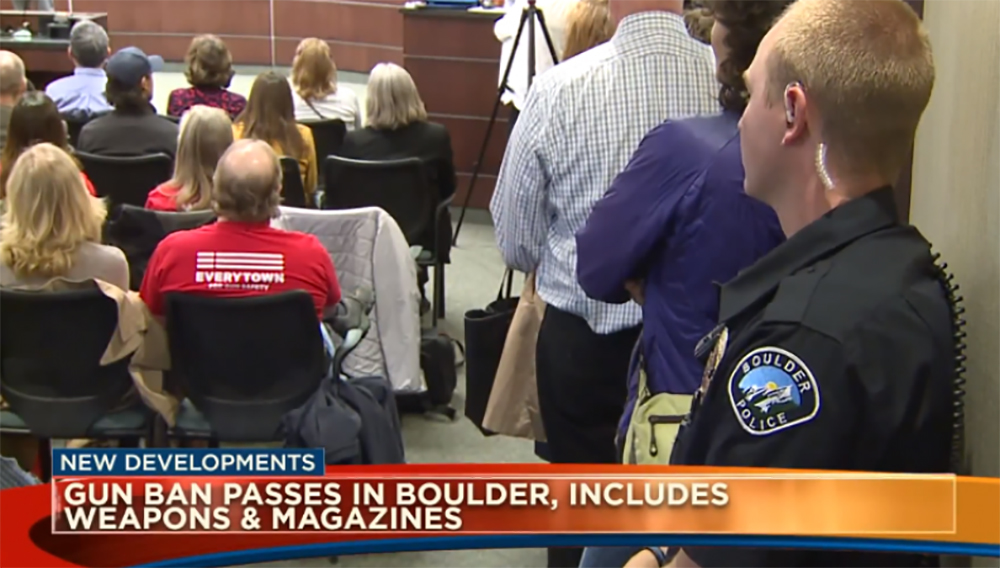 Boulder City Council, in a move that was met with more applause than not, unanimously passed a ban on the sale and possession of assault weapons, high-capacity magazines and bump-stock devices, even while attorneys from a pro-gun rights group threatened legal action. You have until July 15 to dispose of or sell any high-capacity magazines or bump stocks owned.  The Supreme Court Nominating Commission has named three finalists to fill a coming vacancy on the state’s highest court. Governor Hickenlooper has until May 31 to make his selection. The shortlist includes: Maria Berkenkotter, former chief judge of the 20th Judicial District, Boulder County; Karen Brody, judge in the 2nd Judicial District in Denver County; and Carlos Samour, a judge in the 19th Judicial District in Arapahoe County. The University of Denver Sturm College of Law will pay $2.66 million to female law professors who for years were paid less than their male colleagues. The settlement is part of an EEOC decree approved by a federal judge after six women joined suit alleging women were paid less than similarly situated men. Cloud messaging app, Slack Technologies, may be coming to Denver thanks to the city offering “more than $10 million in tax incentives as the cloud messaging app company considers opening its second headquarters in the Denver metro area,” reports Denver Biz Journal, marking continued high tech interest in basing in Colorado. Denver narrowly lost out on Amazon’s much vaunted HQ2. Police departments across Colorado honored those who have died in the line of duty over the years as part of National Police Week. Colorado has lost three police officers in the past six months: Douglas County Sheriff’s Deputy Zackari Parrish was killed in a New Year’s Eve ambush. Gumm was killed in January after a foot chase with a suspect. El Paso County Deputy Micah Flick was killed in February while confronting a suspected car thief. Colorado has lost at least one officer per year since 2004, reports The Denver Channel. Lindsay Saunders-Velez, a transgender inmate at Colorado Territorial Prison, is suing Colorado’s corrections agency. She says she was raped at a men’s prison hours after a federal judge denied her request to block the prison from keeping her in a disciplinary unit. The Colorado marijuana investment floodgates are on the verge of opening wider, after state lawmakers passed a bipartisan bill that would, for the first time, allow publicly traded companies to invest in or hold a medical or recreational marijuana license in the state, beginning next January. To date, since 2014, marijuana has brought revenues to the state in the amount of $4,859,707,381, according to the colorado.gov state Marijuana Sales Report.