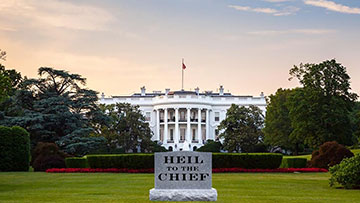 When archaeologists from the year 3160 look back at the collapse of the United States, this will be what they see etched onto the yellowing marble of our Nation’s tombstone. Listen, I get it. I was all-in on Bernie in 2016. And I was incensed at the way Debbie Wasserman Schultz and the DNC torpedoed his campaign.

And, to be honest had any of the GOP field aside from Cruz and Trump sealed the Republican nomination, I would have looked for a third-party candidate to support (aside from Jill Stein because OH MY GOD her collection of soulless folk-pop albums sounds like what would happen if the boardroom of Birkenstock decided to write, record, perform and release their own Starbucks compilation) and cast my “protest” vote.

But the truth is, we couldn’t count on moderate Republicans to play a significant role in this last election — we were left with a malignant narcissist hell-bent on destroying the Republic, as witnessed by the staff of tear-it-all-down and burn-it-to-the-ground anti-establishment, tea-party-meets-evangelical-Right hate mongers and sycophants he surrounded himself with.

So, I examined my conscience and realized I didn’t have the luxury of examining my conscience this time. I banged the drum loudly and for all to hear: The next POTUS had the potential to fill SCOTUS with as many as FOUR justices, replacing those over retirement age in 2016.

To me, that was the most important facet of the last election. I figured there was only so much damage a sitting POTUS could do in four years; shaping SCOTUS was the most significant role (s)he was going to play.

How wrong I was.

The damage Donald J. Trump has done to American interests — foreign and domestic — is incalculable. And we’re not even half-way through his term. He’s exploited every weakness in our Constitutional Republic to benefit himself, buoyed by a minority populist movement that has emboldened the worst among their ranks. Down-ticket, we’re seeing more White Nationalists running for local, state and national representative positions than any other time in contemporary history. He creates a new norm of rock-bottom despotism every single day.

Witness: Our sitting Chief Executive went into a closed-door meeting with a foreign adversary — one who he’s under suspicion of colluding with — days after attacking our oldest and closest allies on a national stage. But that wasn’t the worst of it.

The worst of it was played out in Congress. In our own government, which was expressly designed to build a system of checks and balances, the Republicans in the House Intelligence Committee blocked Democrats from subpoenaing Trump’s translator for even a closed-door hearing.

Let that sink in. This isn’t about right or wrong. This is the GOP capitulating to the Trump base to simply play politics. Fear of losing an election is their motivation.

Trump believes it’s his lot to rule. Not to serve.

Apparently, his party believes it as well.

When mid-terms come, if you’re a patriot, it’s your job to block this heretofore-unseen-in-this-country power grab by a sitting President. You must vote blue. Whether or not you like the person on the ticket.

Whether or not your conscience nags at you.

Our very future as a republic depends on it.