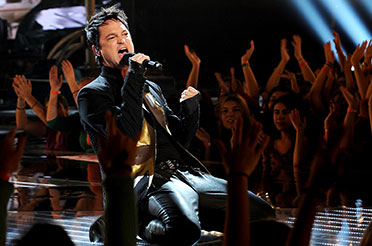 It’s hard to find a band tougher on frontmen than Stone Temple Pilots, if you’re just reading the press. Original member Scott Weiland was fired in 2013 — he later died of an overdose in 2015. Former Linkin Park singer Chester Bennington joined up until his departure in 2015; he committed suicide in 2017. So you might think new addition Jeff Gutt (his last name rhymes with “Groot”) might be a little trepidatious to take over. It couldn’t be further from the truth as the former Dry Cell frontman and X-Factor contestant is equal parts excited and appropriately humble stepping into the role. Here, he talks about what the process was like getting into the band, how he feels about picking up where others have stumbled, and just how talented the other guys in the band really are.

French Davis: Talk about the process of auditioning for and then joining Stone Temple Pilots.

Jeff Gutt: The first day is weird when you walk in and see them in person. I’d been a fan of theirs for son long… to actually look up and see their faces right in front your face. There was a moment where I really was thinking about it. But then you get right down to business… and over time relationship turned into musicians and friends, you know, the process of getting to know each other. As for the recording process (of the new album), it was part of the audition. I went to the studio and we just laid down the melodies… I added some lyrics and just when with what the music dictated to me.

FD: About that, compositionally, talk to me about building your chemistry and finding your own place in the band.

JG: I have a lot of experience in that, making and recording with Dry Cell, or even just making my own records. Been through that process… and with this one it was like mental therap. We weren’t really doing it to make it sell fulfill the label contract like I was when I was in Band With No Name. This time it was a very organic process… I just rode the vibe, rode the wave.

FD: What really makes this project stand out differently from your previous outings with other bands?

JG: The musicianship and the vocabulary and the knowledge these guys have is huge, and it was such a learning process for me. I had to catch up; they’re leaps and bounds above me, really amazing musicians. You know, they don’t get enough credit for that. It was kinda weird, looking up to them as much as I do, and then also come in make my own way.

FD: Good segue into that, talking about making it your own — a number of critics and fan chatter compare your sound to Scott’s and noted remarkable similarities. How do you think are you different? And beyond that, how do you make your own mark on STP while still respecting Scott’s legacy?

JG: Well, there are certain ingredients that Scott brought that are basic parameters that I already use — the baritone for example. So I just try to bring in those basic ingredients, and then it’s me. It’s important to protect what STP is and also what it means to me, and what I want to be, and then putting all those things into it while I’m creating it.

FD: What are some things that surprised you as you got into this process with STP?

JG: I was surprised out how laid back they all are… you know, being the captains of such a legendary ship. They were so down to earth, very cool guys. You know, t very first time I jammed with them is the very first time I met them. So that’s a little awkward itself… just walking in, and then here we go, right into writing and playing. It felt a little backwards… So it took time to get to know each other, but by then we could see there was chemistry musically, which was what mattered.

FD: You’ve joined a group with a pretty dark legacy here, between the suicide of Chester Bennington shortly after he left and Weiland’s OD. How does that impact you, if at all?

JG: You know, we all go through hard things in life… and it’s all about how we go through things and come out the other side. I’ve had to learn how to let a log of things go in my life and not to carry them through all the year. Letting things go is a process for all of us.

FD: What’s one thing you’d want people to know about you that maybe they don’t?

JG: What I’d want people to understand the most is, I’m here for the music, not the glory of Jeff, you www.redrocksonline.com? I’m here for the songs, and for this band. That’s why I’m here, help them move on, move forward, and finish their careers they way they want to.