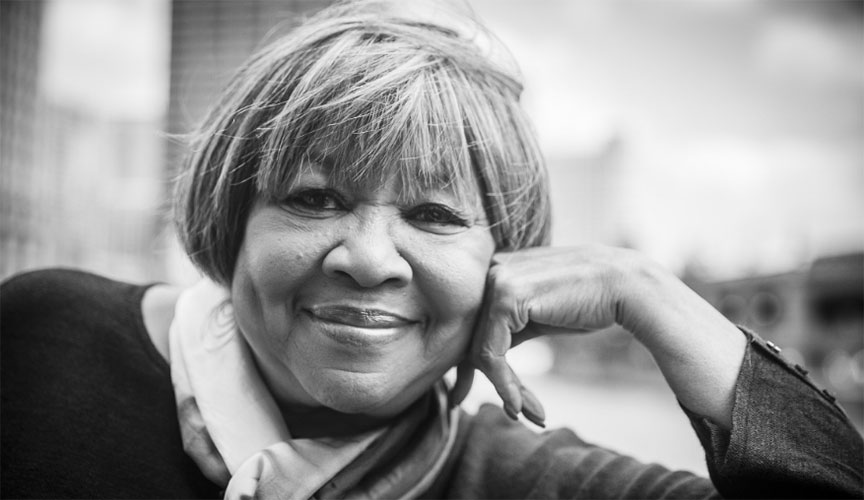 The Lincoln Center. It’s a gorgeous theater up in Fort Collins. Perhaps you’ve heard of it, perhaps not. Entertaining us on stage at the Lincoln Center this past January 20 was the vibrant and eternal Mavis Staples. “At the beginning of her eighth decade of singing truth,” her Lincoln Center bio tells us, “Mavis Staples has delivered a new recording, If All I Was Was Black, featuring ten songs about America today where the present is filled with ghosts of the past.” We were excited to be in the crowd. As noted, “Mavis Staples is an alchemist of American music and has continuously crossed genre lines like no musician since Ray Charles. Weaving herself into the very fabric of gospel, soul, folk, pop, R&B, blues, rock and even hip-hop over the better part of the last 60 years”

The crowd was not disappointed. From the first moments of her entry and the start of the show the entire venue and stage was pulsing with a buzzing energy. Having earned a place in both the Blues as well as the Rock-n-Roll halls of fame, Mavis has been at this for 71 years. She opened by saying she wanted to send out “positive vibrations” that night, and they were well received.

There was one word running through my mind the entire night, that word being history. It was reflected in everything that night: from the music itself, the playlist, and all the talking points. This is compounded by the fact it was the night before Martin Luther King Jr Day, this being important because Mavis marched with him on the streets during the civil rights movement. Every aspect of the show was infused with events of prior years, used to inform the present and affecting the show in minute as well as major ways.

The most noticeable aspect being the talking points, the lyrics, the words. Staples told us stories about what she did in the civil rights movement, about marching in the streets and being arrested for singing and walking. She told us about equal rights movements today and how we can draw parallels from the past. It was beautifully poignant in an America that is witnessing some of its most divisive times in a generation.

However, as I mentioned, this is not the only place history was shining through that night. The next most obvious way was through the music selection. She played mostly original music from throughout her discography, but performed a few key covers from various eras, most interesting to me being her choice of Slippery People by the Talking Heads. Speaking in Tongues was released in 1983, and Mavis has been active since 1950. This may be confusing, because I’ve been talking about history and how the past has affected the present, so if the album came out after the most active years for soul music, that seems contradictory. However, this choice represents an understanding of how new music can affect old, and how it can help older styles of music evolve. Playing newer music in styles of older genres shows that we must be aware of the future and that we must be dynamic to changing times.

Finally, the least obvious way (at least to those without a background in music theory), is within the music itself. She plays what can only be described as quintessential soul music. Soul music is the culmination of jazz music from years prior as well as gospel music before it. Jazz most affects the sense of rhythm, feeling beats 2 and 4, feeling the syncopation, while the gospel music affects the accessibility of the music in the form of crowd participation and simple chord changes. While this may sound like a criticism of the music, I would say it’s one of this genre’s strongest aspects; it allows everyone to join in, which is the entire point.

This leads me to the thing that was occupying my thoughts second-most often – Inclusivity. Because of the band’s charisma and the chemistry between its members, as well as the crowd’s energy, everyone in that room was included in the fun that night, which isn’t always the case. Staples would get the crowd to sing along with her, and you would see her laughing on stage with her band members and interacting with them. This alone captures the entire essence of the music: everyone join in, loves each other, and contributes.

Returning back to my point about jazz and gospel, the influence from these genres is also seen in the interaction. Jazz is often about interaction between band members (at least in small groups of trios to quintets). The point is to listen to what any one member is playing and play it back with your own twist. You could see each member looking at each other, as if to say “here’s what I’m saying” and the other members listening back saying “I hear you”. Gospel music is about getting everyone in the pew to sing along, and it sure seemed like everyone in the crowd was singing along. No one was left out. Staples even made jokes about taking the crowd on tour with her on extra busses.

Tying back in to my point about the setlist, her choice of covers and her own music is also what made this event so accessible for everyone – there was at least one song everyone knew and could sing along to. I saw people of all ages in the crowd, so covering the Talking Heads was a way in for the middle aged people, and her music was a  way in for the older people who grew up with her music.

Her ability to speak on current events, overlapping with her life of involvement with the civil rights movement, tied both generations together. Our society is faced with similar problems of racism and bigotry today as it did then. To quote Staples: “We aren’t done yet”. When she got arrested, she told us that they would just go back out and start up again. In her Freedom Highway song, one particular lyric stood out to me: “Made up my mind and I won’t turn around”. We’ve come too far to turn around now, and we have to keep marching, together, and remember how far we’ve come together and remember what has brought us here today. Good thing we have soundtracks from Mavis Staples to keep us smiling and singing along the way.

For the new album from Mavis Staples, If All I Was Was Black, you can check out her Bandcamp or her website. Her next album, Live In London, will be available February 8, 2019. 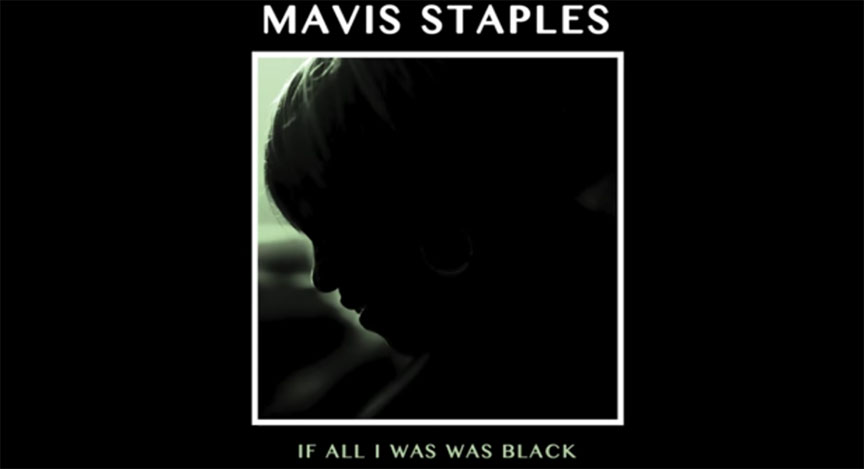