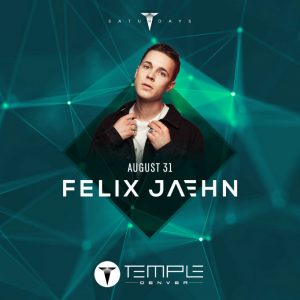 Felix Jaehn, the platinum selling superstar DJ and record producer, has been hitting multiple venues in the U.S. as part of his international tour. The German phenomenon, specializing in tropical house and dance music, is best known to mainstream audiences for his rework of OMI’s track, Cheerleader.

Yellow Scene Editor De La Vaca met up with him at his show at Temple Nightclub Denver back in August. We lost the audio for a while, but we got it back and so we present this very lovely, wide ranging conversation with Felix Jaehn:
.

DLV: Nice to meet you…You look just like you! Thanks for doing this interview. How are things going?

FJ:  Nice to meet you.  Things are great. Music’s going well. Tour’s going well. I just got my own figure at Madame Tussauds, the wax museum in Berlin. I was standing like right next to it and someone was like, “it looks just like you”. I don’t know if you know what that is. . .

DLV: Americans love Madame Tussauds, it’s so Hollywood. So we’re talking about America. Anyone paying attention to America, it should make you sad.

FJ: Ok…One good thing about America right now is the club scene. I’m so happy to be here and, honestly, on this tour…I feel like I’ve learned a lot because the crowds here actually loved some of the deeper stuff I’ve been doing. Its huge over here. When I play European shows, at least the shows I’m doing, they don’t always get it.

DLV: You’re living the best life right now. How did you get to this place? You played violin at 5. Started DJ-ing at 16. You even studied business for a while. You’re from Hamburg. How did you get where you are?

FJ: Ha. Yeah. It is a long story as well. I started to DJ at 15 or 16 at friends’ birthday parties and student nights. I was just the guy plugging my phone and stuff like that. This was prior to streaming so download was a big thing. This was like 2010/2011 and a lot of my friends didn’t have a big music collection, and you couldn’t just put on any Spotify like you do now. And I had friends that were like, ‘hey, bring your laptop,’ and it started from there. I brought my first controller, put together a little team with my brother and some of my friends, we bought some speakers, a fog machine. We were like, ‘ok, we’ll hook you up, be your party DJ’. It just kept growing.

After high school, I went to London for a year to study music production, music businesses, songwriting, all of that. I was running around London every day and handing people my mix tapes, uploading tracks on SoundCloud, connecting to bloggers. I eventually got a show at Ministry of Sound and things kept growing.  From that, I became number one on Hype Machine and, suddenly, all the industry people and record companies started reaching out, track by track. Eventually they requested an album.

DLV: What’s your production inspiration? What are you trying to give people when you’re out there?

FJ: One of my main inspirations is Avicii. I really like Calvin Harris as well. I love the melodies, the songs. I make electronic music, but I’m focused on the melodies, the meanings, on the emotions and the lyrics. Really, I want to give people a good time.

Now my music is getting a bit moody as well, about me growing up and finding myself, and also some tough times. But I always end happy.  At the end of the day I want to leave people in a positive way. I am an entertainer and I’m supposed to uplift people. After all, they want to go to clubs and have a good time, forget their everyday lives.

DLV: But there’s different types of clubs. You can go to some clubs and see, like an emo band. I think the idea of music being able to address different emotions, there’s a space for it, yes?

FJ:  Sure. In music there’s space for everything. But we’re talking about what I want to do and that’s that I want to make people happy.

DLV: And you’re doing it. You’re sure doing it. When I was first coming here I told my friend Lauren, you want to come and help? And she told me she spent time listening and that’s the thing about you, super positive and uplifting.

Lauren:  Yeah… I’ve spent so many hours in the darkest corners of SoundCloud, but trust me, I used to make music myself. There’s something really inspiring about what you create. And not just positive, like I want to listen to you on the radio, but positive in the sense that you want to give people a damn good night. A really beautiful essence.

FJ: It will be interesting to see what the reactions will be like now that I’m getting more meaningful, thoughtful on the lyrics side. Like my most recent track, LIITA, with a Brazilian band called Breaking Beattz, about not being able to feel the love, about being emotionally blocked and closed up. It’s not what I wanted to play but I had to get it out there. And it opened up the whole story.

DLV: You said you’re playing like five shows in the states, this is the fifth one. What’s next? You’re DJ’ing in Europe, the US is feeling you, you recorded a new album. When does it drop? When do you do a full North American tour?

FJ: I don’t have an exact date for my next album yet, but I know it will be sometime next year. Some singles are dropping now, though. There’s one I’m going to play tonight, Never Alone [see below], that I’ll be playing tonight. It’s a collab with Mesto, a DJ from Spinning Records; it’s a proper festival, feel good anthem, that I wrote with Michel Zitron and John Martin. When I went to the studio with them in Stockholm and we started writing the song, they started singing next to me and I was like, “fu*k, it’s really them” because I recognized the voices.

DLV: I’m getting a real love from you for what you do and for the people around you. I ask you about inspiration and you mention Avicii and Calvin Harris; that’s dope. You have a real love for the music you create and the people that created if before you. That’s really wonderful. It feels humble. Where does it come from? 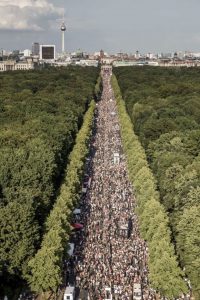 DLV: Any other geographic influences?

FJ: We actually just came from California, spent my birthday at Malibu Beach, it was really cool – living the dream… I’m going to rent a house out there. I’m planning to be in LA for about a month. I want to feel the vibe, see what it does to me.

DLV: I think you would love it there. In terms of geography, I’m seeing that all of the impacts on the world from climate change are really affecting the club scene. Shows. Dance culture. Do you see similar things?

FJ: Yeah. That’s actually a big issue, because you asked about inspirations. Besides other artists, I feel like nature and the world are basically inspiring me a lot as well. There’s a  song coming out where I talk about how I see the world and us as human beings in the world, and how we’re all fucked up. We’re living too far away from the origin, where we came from and what we’re supposed to be — as animals. I think it’s a big thing for me, as it should be, and for everyone at the moment. It’s a big topic that you can’t get away from.

DLV: What’s been the best moment of music for you since that drop?

FJ: The first one that comes to mind is a quite recent one, from July this year. I played in Berlin, in my home country in front of the Brandenburg Gate, which is this iconic building in Berlin. They say were like a million people in front of the stage because it was Berlin Pride Christopher Street day. And I was closing down the stage and it was like honestly surreal and such a special moment for me…

Mainly also because it was Christopher Street Day and I had just come out as bisexual publicly like a year and a half before. Then to be able to play at Berlin Pride and play in front of so many people, was like such a surreal moment when I feel like I was touching a lot of people at an emotional, honest level.

DLV: That’s perfect. I like that story. That’s all we need. Felix Thank you for sharing that. I know you have a show at midnight, so I want to let you go. Thanks for your time. We’ll be in the crowd with our hands up…

FJ: Thank you. Thank you so much…I’ll see you out there.

He did see us out there. In fact, right after he started his set I received a Whatsapp message from his tour manager, inviting us on stage to sit at his private booth. I don’t think I’ve ever been on stage with a world famous DJ, drinking champagne and cheersing while he’s spinning. Talk about surreal moments. True to the conversation – and the sentiment that Lauren had shared – the set was incredibly powerful, danceable, and positive. We’re excited about the future of EDM, especially with someone like Felix Jaehn coming up and moving in beautiful directions. Make sure to check him out online. He has all the socials: Facebook, twitter, and his own website. It’s definitely worth it.

Since the time of this interview, Jaehn has released a new single, Never Alone, alongside Dutch producer Mesto and Swedish mega duo VCATION. The track highlights some of the more serious tones Jaehn talked about with Yellow Scene. Stream it here:  http://bit.ly/FJMESTOSTREAM