SPOTLIGHT on Nick Urata of DeVotchKa 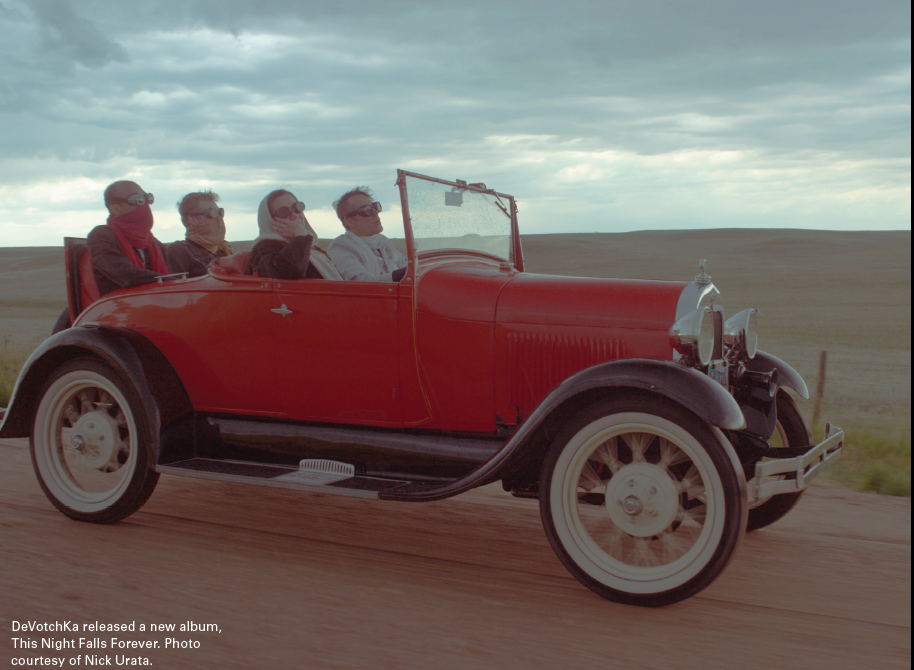 2006 was a banner year for DeVotchKa. The Colorado band had already been around almost a decade and toured extensively with burlesque superstar Dita Von Teese, but that was the year of their breakout performance at Bonnaroo, followed by their unforgettable score for the critically acclaimed independent Steve Carell flick Little Miss Sunshine. Since then frontman Nick Urata has become a sought-after film scorer himself, racking up 30 credits including Paddington, I Love You Phillip Morris, Ruby Sparks and Whiskey Tango Foxtrot. Here, Urata talks about his many collaborations, learning to enjoy the moments more, and their sensational new album The Night Falls Forever.

French Davis: It’s been a while since your last studio outing. Why the long lag?

Nick Urata: No easy answer there. It seemed like just yesterday for us, but it’s not like we were lounging around or having a life — in that time we we were attracting all these collaborations that we used to dream about, like with the Colorado Symphony Orchestra, Willy Wonka at the Hollywood Bowl, the movies A Series of Unfortunate Events and Paddington, etcetera. It seemed redundant and a little anticlimactic to just go back and spend a couple of weeks in the studio banging out an album of disposable songs. Thus we embarked on this quest to incorporate all these epic experiences with symphonies and Hollywood film orchestras into an album that will stand the test of time, which is how This Night Falls Forever came to be.

FD: You’ve done an impressive job “staying the course” … always being true to your own sound, regardless of what’s happening and trending around you. How have you managed to eschew label meddling, and keep focused on the DeVotchKa way?

NU: It’s hard to have the right perspective when you are this close to it. I guess the key has always been the thrill of creating something from nothing, wrestling ideas out of the ether. Everything else, the trappings, the industry, they always turn on you. The moment you feel you have it in your hands, it fades away. So if you’re in it for the wrong reasons it’s gonna catch up with you. We have by no means always successfully navigated these pitfalls, but the devotion to the music and the magic of the creative process is what has kept us on track.

FD: What do you know today that you wish you would have known when you were starting out in 2000?

NU: It’s hard to articulate how fragile these relationships are and how much blind luck has played role. As the leader, I was the guy who crawled under the van on the side of the road, went into to debt, sparred with the press. Like the head of the family in hard times it was hard to relax. I guess I wish I could have enjoyed the moments a little more, cause we had some epic ones.

FD: Talk a little about your personal journey with film scoring and how that differs from what you do with DeVotchKa.

NU: I get asked about this a lot — I’ve been really fortunate to get involved in filmmaking. It has taken me down musical pathways I never would have explored if I was just writing songs for my band this whole time. The process of scoring a film is something that can’t be taught, you have to learn on the job. I think the biggest misconception is that you are left to your own creative devices. There are a lot of cooks in the kitchen; you have to be thick-skinned and quick on your feet. I can only hope these experiences have made me a better musician and band leader. It has certainly increased my reverence for the act of performing with your friends in front of a live audience.

FD: What are some of your all-time favorite film scores, and why are they your favorites?

NU: The Empire Strikes Back — John Williams blew our minds and changed the game with Star Wars, then the sequel becomes like an opera. It is hard to find better mastery of the orchestra and the melodies, if you hear them today, all these years later, it will take you right back to the scenes they came from. Kudos to George Lucas for letting the music drive the film. And, Once Upon a Time in the West — Ennio Morricone, his palette of instruments was so unique and so deftly recorded, it continues to inspire generations of musicians. This is my favorite marriage of Sergio Leone’s godlike imagery and Morricone’s masterful musical commentary. If you listen to it as a standalone piece, it rivals Tchaikovsky and Verdi.

NU: We will continue to release videos for the songs from This Night Falls Forever. I hope your readers will check out our latest video for “Empty Vessels” (the song was featured on the Oct. 11 episode of Grey’s Anatomy, — ed.) It’s our most moving and ambitious to date. We will be releasing some remixes and light hearted singles as well.