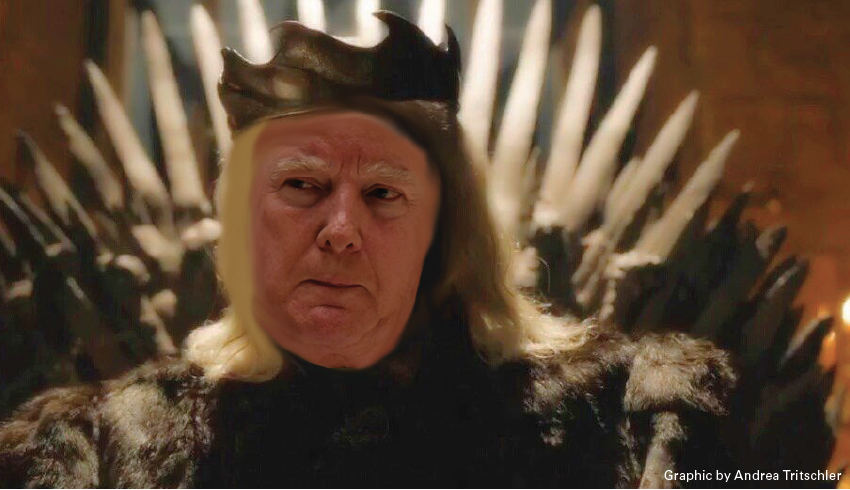 Three Years. That’s how much time Michael Cohen will spend behind bars after his plea bargain stemming from charges including campaign finance violations, tax evasion and lying under oath to Congress. I’m writing this on the same day this news broke.

And it’s the tip of the iceberg.

By the time you read this, chances are more chips are falling, more indictments will come, and we’ll be heading into a polarizing conflict the likes of which we haven’t seen in more than 100 years.

And, to be frank, it doesn’t look good for any of us. We’re dealing with a mad king, sitting on a throne of his own manufacture, who truly believes it’s his lot to rule, not to serve.

He is a man without a sense of duty to his constituency, which includes every single American citizen. He’s a man who has ushered in the most partisan — if not polarizing — era in U.S. political history since the Civil War, whose greatest successes have been a result of his ability to divide, not to unite.

His narcissism is unbound in a way that defies logic — even Nixon knew when it was time to turn tail and run. And even Ford knew that protecting the Republic meant pardoning him, even at the expense of his own career.

This is a man with no understanding of history or precedence, or respect for tradition or honor. He is beholden to nothing other than his own base need and desire for adulation and power, and even if he faced a firing squad, he would not yield his throne.

What’s worse is the legion of crusaders rising up to endorse his every attack; champion and share his every hate-filled tweet, missive and televised tantrum; and who fervently believe the ends justify the means as long as it accomplishes his agenda — witness the horrific case of election fraud perpetrated in North Carolina in the Ninth District race between Mark Harris and Dan McCready where ballot tampering was allegedly committed to favor the GOP candidate.

Those who bend the knee before this mad king have become zealots to his cause — to the point that they don’t even bother excusing his behavior. They welcome it. To them, he’s what they aspire to be — the embodiment of “Maverick American Individualism” who bears no responsibility to his community, as long as he wraps himself in the cloak of nationalism and an American flag.

These are the scariest parts of what we have in front of us: A rabid group of well-armed ideologues who believe their cause of white nationalism is just, champing at the bit to impose their will on those who abhor the way we’ve turned immigration into a fear-filled political football, or those who would rather every American have access to healthcare, or those who would support the rights of a woman to choose what she does with her body, or those who know it really doesn’t matter which bathroom someone wants to use, or those who believe same sex marriage should be a right.