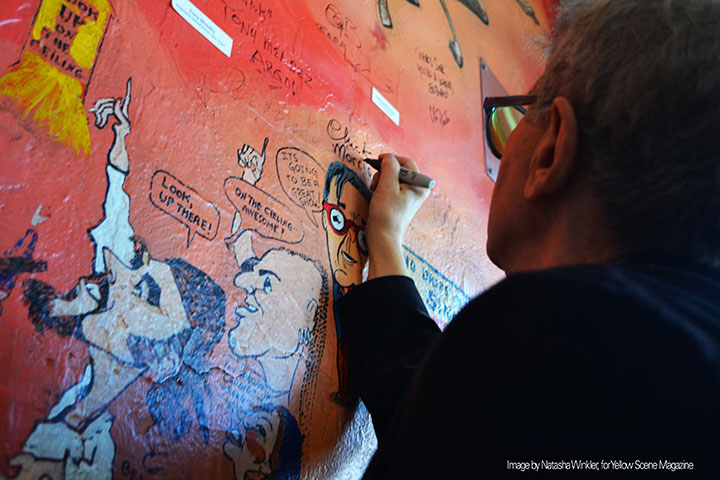 It’s not every day that you get to be present when history is made.

Sometimes history can feel like a series of grand events, wars and civilizations collapsing, nations rising and meteors crashing to the Earth, mankind’s greatest ships flying to distant parts of the universe, but – more often than not – history is just a drawing on a wall. Today, February 4th, 2019, former Sink Manager and Colorado Music Hall of Fame inductee, Chuck Morris stopped by the world famous, 96 year old, local Boulder institution, The Sink, to sign the Wall of Fame. There was also an unveiling of his newest caricature… of himself.
Chuck Morris, in his own history marking event, signed his name on the same wall that features autographs from such luminaries as President Barack Obama and forever gone, global food aficionado, Anthony Bourdain, among others.

Why would Chuck Morris have his name next to Barack Obama’s and Anthony Bourdain’s? Well that’s easy, but you have to know the history:

Chuck got his first break after dropping out of graduate school. In 1968, Herbie Kauvar, then owner of The Sink and Herbie’s Deli, offered him a job booking local bands. “We had become friends when I used to have a beer with him after I left Norlin library studying until 11 pm or so as a Ph.D. student and T.A. He told me to quit and that I would make a great manager. I was stunned. I thought about it for one day and then took it. Changed my life. It was the heyday of The Sink. It’s funny how fate can change the whole direction of our lives.” Chuck tells us. “I really thought it would last six months and I’d go back and get my Ph.D., and that was 50 years ago,” recalls Morris in an interview with 303 Magazine.

Chuck recalls booking many bands at The Sink. “Upstairs while I managed, it was The Alley ID. From 1968 to 1970, I booked a bunch of bands including Chris Daniels, Tommy Bolin, TK Little, and others except for the nights we had pool tables. Downstairs, we only had one band, which was the second appearance of CU dropouts, Flash Cadillac and The Continental Kids. Booked them after my bouncer/CU student, the great Kevin Fitzgerald, took me to a rehearsal and they blew me away. Broke the all-time record for 3.2 beer sales for Friday afternoon club. Paid them all they could drink. Never got that deal again.”

When The Sink went through life as Herbie’s Deli, the famous wall art was covered up with pine boards, patiently waiting for The Sink’s loyal patrons to demand its return. In 1989, at the urging of his sons, Kauvar “de-models” the deli and re-opens as The Sink. A former artist, Llloyd Kavich and his sidekick, Streamline the Rat Dog, were once again pressed into service to restore the counter-culture artwork which had come to define The Sink. Chuck’s caricature along with other esteemed “Sink Rats” from that time period are still on the wall in the famous “Rat Room”. Now 30 years later, Chuck will get a new representation upfront on the Wall of Fame alongside signatures of all of the famous people that have graced us with their presence.

Chuck was quick to point out, right after signing the wall, that he didn’t have the experience to be a manager but that Kauvar thought he had it in him, gave him the opportunity, and that it changed his life forever. Morris was, in fact, getting his PhD in dentistry. He was bound for a life of dental alignments, tooth cleanings, and lollipops for kids who were too scared to sit in the chair. Instead, he was inducted into the Colorado Music Hall of Fame and came back to the place that changed his life, The Sink, to receive the accolade that means the most, that only The Sink could provide, a caricature of himself on some of the world’s most famous restaurant walls, complete with an autograph.
This is important for locals. It’s important for Boulder. And for anyone that’s traveled the world to come to Boulder and eat at the world famous The Sink, this matters. Thank you for your history-making moments, Chuck. Keep drawing and keep making music. See you – or your ink – at The Sink. 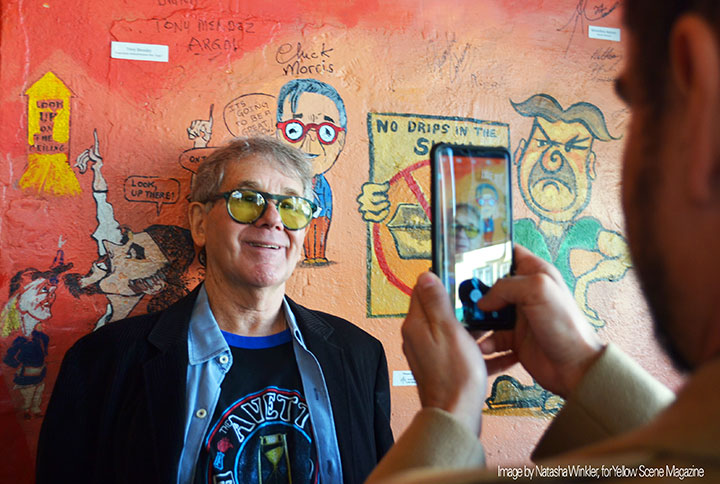 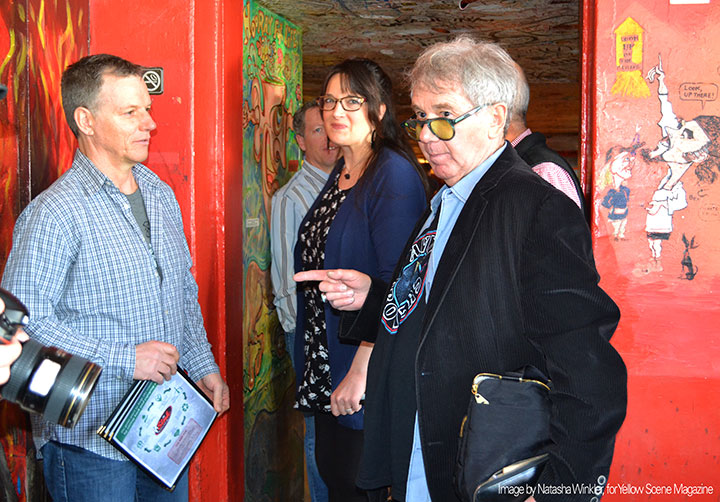