Community Corner | American in Mexico: My view from the other side of the “wall”

As President Trump prepares to declare a national emergency to build a border wall, I’m sitting here on the other side, holding my breath, horrified by what is happening in my home country and its effect on the American psyche and Mexican-American relations.

This situation is one of many since Trump took office that he’s used to stoke fear among Americans about Mexico and Mexicans. Between Trump’s hateful words and actions, and the media’s underrepresentation of all that is good about Mexico, many Americans have serious misperceptions about their southern neighbor.

When my family left Louisville, Colorado, in the summer of 2015 for a year-long road trip through Mexico, Trump had just announced his bid for the presidency. At that time, him winning the election seemed like a long shot – at least it did to me. Even so, his insults to Mexicans and Mexico were already so divisive and destructive, I had a custom bumper sticker made for our car that said, “Donald Trump: No Bueno Para USA” just to make it abundantly clear we did not support his views. It got a lot of chuckles from Mexicans we met on the road. Little did we know it would be no joke come November 2016.

Fast forward to today, and we are still living in Mexico and Donald Trump is still beating his chest about Mexico and building a border wall. Except now his words carry the power of the presidency, tearing thousands of migrant families apart and endangering children, furloughing hundreds of thousands of federal employees, and stoking fear among many (mostly white) Americans about Mexico and Mexicans.

This constant incitement of a negative narrative around Mexico and its people is damaging to America’s relations with Mexico, and Americans’ relationships with each other. It is also feeding into long-standing negative stereotypes about Mexico and Mexicans that just aren’t true. One of which is that Mexico is a dangerous place filled with criminals.

Case in point – when we return to the U.S. from time to time, one of the first questions people ask us is, “do you feel safe in Mexico?” Safe from what, exactly, I want to ask. From “banditos” on the road, drug lords on every street corner, knife-wielding murderers and rapists, or corrupt cops? Take your pick of one of the many stereotypes some Americans have about Mexicans.

Yes I feel safe. But just like living anywhere else in the world, including the U.S., I don’t go looking for trouble. I don’t buy illegal drugs, wander the streets alone late at night, leave my valuables laying around, or drive like an idiot (at least I try not to). Does that mean that crime does not happen in Mexico? Of course it doesn’t. It happens a lot. 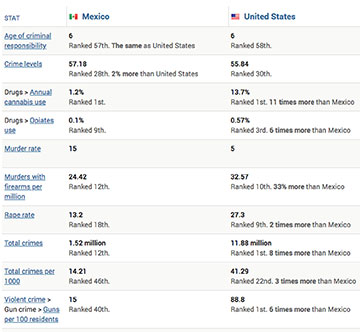 But Americans shouldn’t be so quick to throw stones. They may be surprised to know that certain crimes, like rape, illegal drug use, and murder by firearms occur more frequently in the U.S. than Mexico. And does taking these precautions guarantee my safety? Of course it doesn’t. But it wouldn’t guarantee my safety anywhere I lived.

I feel safe because this isn’t a culture ruled by fear. There may be gun violence in Mexico (although the U.S. far outweighs Mexico – and the world – in the number of mass and school shootings), but we don’t have lockdown drills at school. I don’t feel the need to check for the closest exits when I go to a movie or concert. I don’t worry that my neighbors or the people driving next to me on the highway may be packing heat like I do in the U.S. (and rightly so, since the U.S. tops the world in personal gun ownership).

On the contrary, from what I’ve witnessed, Mexican culture is ruled by compassion and camaraderie. People smile and greet each other when they pass on the street. They don’t look the other way or pretend not to see you. People stop and chat for a good long while, rather than rush off and brush you off. And when shit goes down – and it has occasionally in the town where we live – they come together to support, protect and defend each other. So, yes I feel safe here knowing my community has my back and that I’m not a stranger to my neighbors, nor are they strangers to me.

Another misperception many Americans have about Mexicans is that they are flooding the country and taking all their jobs. But in fact, more Mexican immigrants have returned to Mexico than have migrated to the U.S. in recent years. And numerous studies have shown that immigrants do not cause job losses for U.S. workers, and indeed are a net benefit to the economy. And contrary to what 45 percent of Americans believe, immigrants do not cause crime to go up in the communities they live, and in fact are much less likely to commit crime than non immigrants.

Ironically, it is Americans who are leaving the U.S. for Mexico in increasing numbers. The U.S. State Department estimates that 1.5 million U.S. citizens are currently living in Mexico. In fact, Mexico is home to the largest community of U.S. citizens living outside the country. And it’s not just retirees making the move. More young people and families such as ours are seeking and finding better lives south of the border.

In our three plus  years traveling around Mexico and living in a small town on the coast, we have experienced nothing but kindness and generosity from the people we’ve met, despite our nationality, color of our skin (we are white) and the politics of our home country. We’ve been helped by strangers, cops and truck drivers when we’ve been stuck on the side of the road. We’ve been taken to a hospital by hotel worker when our daughter was sick. We’ve been treated to impromptu workshops from artists and artisans we’ve happened to meet. We’ve been invited to community events, cultural activities, religious ceremonies and celebrations, birthday parties, home-cooked meals and many, many fiestas. And our local school welcomed, nurtured and cared for our daughter even though she spoke no Spanish when we arrived. Now our little girl has lived in Mexico more than half of her life, speaks fluent Spanish, and feels just as at home in the Mexican culture as she does with her American roots.

I sometimes wonder how the experience might differ for a Mexican family that was new to the U.S. Would they be welcomed with open arms? Would they be helped by strangers when they were in trouble? Would they be invited to community events, family celebrations and into people’s homes? Would people always greet them in passing and wish them well (que te vaya bien) when they depart like Mexicans do with us? Would the local school accommodate their children that didn’t speak English? And not just accommodate, but love and cherish and make them feel special and included as our teachers have done with our daughter? And would the people they meet patiently speak English slowly and clearly for them to understand, as so many Mexicans are patient with our Spanish? I hope so, but in Trump’s culture of fear, I’m not so sure.

We still drive around with that bumper sticker plastered on the back of our car. It’s worn and faded but it’s message remains clear: there is no room for fear and hate between our two countries. It’s time Americans show more compassion and camaraderie toward their southern neighbor – as this bumper sticker I spotted in Guadalajara expresses so perfectly: Unidos En Amistad (united in friendship).

Debbie Slobe is a writer and communications strategist from Louisville, Colorado, who emigrated to Mexico with her family in 2015. She blogs about her family’s travels on SlobeFamilyAdventure.com. You can find her on Twitter, Instagram and LinkedIn.