Bliss Out With Oskar Blues 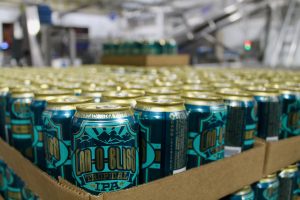 Oskar Blues’ new series Can-O-Bliss is aptly named. The first of the series to launch, a tropical IPA,  fizzles lightly on your tongue, flavors of peach and citrus kiss your tastebuds signaling the hard work of the day is over. It’s the kind of the beer that I like to start my nightcap with even if it ends with something a little stronger. Not that the Can-o-Bliss is light, it boasts a 7.2 percent ABV, but it’s the perfect beer to crack open after being out in the cold, a cure for the winter blues if you will.

“It took a bit of experimenting to get there,” said Juice Drapeau, head brewer at Lyons. He mostly oversees preparing and experimenting with new hops, new methods and new beers in small batches that often unique to the taproom.

Can-o-Bliss started out as one of these beers, with a centrifuge bought specifically with this hazy beer series in mind. The centrifuge spins solids out and ejects them, leaving beer in the middle, without any exposure to oxygen.

“If you have hops with too much yeast, you lose the flavors, you end up with this sort of grassy flavor,” says Robin Mead, lab manager at the Longmont location. The centrifuge also helps monitor clarity and turbidity of the beer.  “Hazy beers are different, they’re more subjective.”

The Can-o-Bliss Tropical IPA has a complex mix of sweet and fruity and bitter hops, you can tell a lot of time, energy and experimentation has gone into this brew, which will be followed by the Can-o-Bliss Hazy IPA and Citrus IPA.

We are all dwarfed by the large stainless steel tanks as the brewers take a small group of us through the tap room, pointing out the most important parts of the process, including the machine that they use to dry hop the beer. Adding some hops in secondarily, creates a beautiful hoppy aroma in the beer. Many of the sweet yet citrusy front notes however, come from the combination of five hops, all of which have tropical aromatics or taste:  Mosaic, Azacca, El Dorado, Galaxy and Idaho 7 hops, the latter which features most prominently in the Can-o-Bliss brew.

“Flavor isn’t cut and dry, it’s variable,” Drapeau says. “It’s not a direct scale up so it takes a few batches to get there. We knew we wanted to incorporate these hops and we knew in combination of each other would yield tropical notes.” 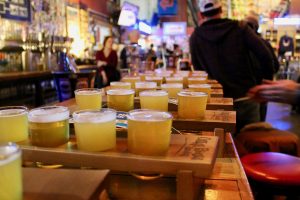 Flavors of kiwi, pineapple and mango transport you to a luau, a tropical celebration in the middle of winter that can almost make you forget it’s snowing out your window. The Can-o-Bliss has a dankness to it, a little bit piney and papaya sweet, which is likely where the beer gets its name from, the play of words on cannabis, but don’t be fooled, there is no THC in this drink.

“We’re honoring the New England IPA, but it’s different in the amount of haziness that you can get, but this beer preserves those nuances and subtleties. You see what the hops can do and then scale it back,” Drapeau says.

The Tropical IPA is the first release in the Can-o-Bliss series, but with the government still shutdown, new beers aren’t getting approved, which could potentially delay the release of other beers in the series, and getting new or experimental brews out to the public.

It’s not a problem Oskar Blues is facing alone, all other major and craft breweries looking for a new release in the new year will be hurt by the government shutdown, having to wait to get new beers out to the public until the government is back in session. But even then there is likely to be a backlog of new brews waiting to be approved, and it’s going to put financial strains on smaller craft breweries that are dependent on new releases either at their brewery or to liquor stores.

Oskar Blues with their 11 year-round taps and national distribution, will likely be spared some of the hardship but the frustration is the same. Brewers at Oskar Blues are busy, Drapeau says he basically creates a new beer each week, that are only distributed at the company’s tap rooms in Lyons, Longmont and Boulder. The Can-o-Bliss is just one of his many developments that aim to take the brand beyond their signature Dale’s Pale Ale.

“We became interested in this centrifuge process eight to nine years ago with how it could help the flavor of the hoppy beers and create more interesting beers going forward,” Mead says. “It’s been interesting to watch it develop over the years.”

And it’s interesting to drink. A beer that can please both the avid IPA drinker and the person who might consider themselves hops averse, since the hops are prominent but delicate.  Can-o-Bliss will be available on tap and in six and 12-pack cans nationwide, so crack one open and find your bliss, might I suggest by a heat lamp.