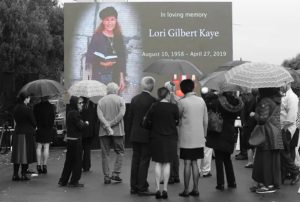 Her name was Lori Gilbert-Kaye. She was a congregant at Chabad of Poway near San Diego, CA, in synagogue for a Shabbat service on the final day of Passover. Her mother passed away in November. She was there to say a mourner’s Kaddish for her.

A man walked in. Really, an overgrown baby of 19 years of age, carrying an “AR-15-style assault rifle,” (according to Poway Sheriff Bill Gore) who opened fire on the congregation.

Witnesses later said Lori jumped in front of Rabbi Yisrael Goldstein.* Goldstein was one of the founders of Chabad of Poway. He’s alive because of her selfless act.

The hate-filled, reprehensible rhetoric of the shooter — unnamed here, because it’s my hope that he’ll rot away in prison as anonymous as he was the day before he opened fire — found later in a manifesto online, reads as the mutterings of a fearful, entitled, disenfranchised white man, parroting all the lies and insane mutterings floating around the dark web and back woods hollers of enduring good-ol’-boy networks.

He’s just another bucket of human sludge in the tidal wave of white nationalism swamping our shores.

In his fevered dreams of racial purity, he expressed disdain for President Trump based on his perceived support of Israel.

That talking point lit up social media as though it exonerated the President — even though it hit the feeds even before media had the chance to lay blame at the Presidential Seal.

The lady doth protest too much, methinks.

The product of the President’s work is the inspiration we’re faced with now.

This President has become a channel of hate for them. His xenophobic lies have become their catalyst. His racist equivocation and consistent doubling down on the “Very fine people on both sides” soundbite from the Charlottesville debacle have become their rationale.

He’s larger than the truth.

That’s where we are now. There’s a cult of personality behind him — a groundswell of people who allow him to create a reality for them. One that is often divorced from fact and truth:

“Your Democrat governor here in Wisconsin, shockingly, stated that he will veto legislation that protects Wisconsin babies born alive. Born alive,” Trump said at a rally on April 27 in Green Bay. “The baby is born, the mother meets with the doctor, they take care of the baby, they wrap the baby beautifully, and then the doctor and the mother determine whether or not they will execute the baby.”

This is imaginary. This doesn’t happen. But it’s just one example of the way he creates his own reality and an arena full of people buy into it.

He’s painted a picture of an America under siege. Beset on all sides by brown people busting down doors to pillage our coffers, rob our homes and rape our women. And he’s allowed that to morph into the next narrative: That Jews like George Soros and Jewish organizations like HIAS are greasing the wheels.

It was precisely that narrative that led the Pittsburgh synagogue shooter to open fire at Tree of Life – Or L’Simcha Congregation six months to the day before the Poway shooter’s rampage.

In both cases, the shooters derided Trump for not being anti-semitic enough.

In both cases it was Trump’s anti-semitism than inflated their rage precisely enough.

And to them, Lori is just…