Spotlight on Emma Mayes and the HIP 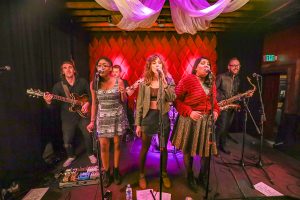 Horns and big-stage bands are en vogue again, much to the delight of people who want to see a real show when they go out. And one of the burgeoning Colorado acts is finally getting some well-deserved traction. Emma Mayes And The Hip are turning heads – thanks to a second nomination for Best Soul Band in Denver’s Westword, the release of their funky, soulful EP earlier this year Little Black Thoughts and the addition of a new member of the team – an actual agent. Here, Emma talks about the journey so far, the business side of the show, and landing the coveted City Park Jazz gig later this summer.

French Davis: Give me the Emma Mayes story.

Emma Mayes: I’m from the Boulder/Longmont area. I grew up singing and performing and started to take it seriously in high school. I went to college and traveled with my a cappella group MIX and performed and competed nationally and internationally. I got my start in the Denver music scene and writing my own songs with another soul/hip hop fusion band called Drop Switch. I was also a part of a funk cover band called Wash Park. My biggest influences are Lauryn Hill, Sia, Little Dragon, Jill Scott, Jessie J, Sam Smith, and some others.

FD: Tell me more about the history of the HIP — how y’all got together, how long you’ve been playing together, etc.

EM: I was craving a new project and had a vision of starting a group with backup singers and a horn section. The first incarnation of the group started about four years ago and I recruited mostly people that went to CU Denver.  We have cycled through some members since then, but the founding members are Alex Newton (Guitar), Elyse Midgyett (vocals), Teresa Suydam (vocals), and Adam Landmark (bass). 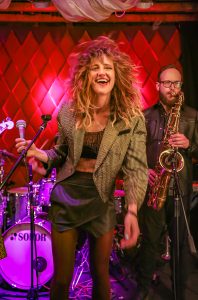 EM: It usually starts with Alex sending me part of a guitar idea that he wants to turn into a song and then I write to it and we bring it to the rest of the band. I am a very introverted writer so I do my best writing while driving around, alone in my car! But almost every song starts with Alex, so he deserves a ton of credit.

FD: Talk about your EP a bit — how did that come together, the recording process, why you chose these particular tunes, etc.

EM: The songs went through a lot of changes before we solidified them into the new EP. The process was long – we originally recorded them at another studio and then re-recorded them with Tyler Imbrogno of Daymoon studio. He truly gave these songs a necessary facelift. It was not only a recording session, but he helped us produce the EP into a cohesive sound and had great ideas and even added some organ/synth to our tracks. They were LONG days but the work was necessary. One of our songs, “Trade It All,”  was borne from another song that we completely took out of the EP and the finished product ended up being one of our favorite tracks. We also reworked a couple of songs that were more free-form and turned them into separate songs. We have the tendency to write very long songs, so our goal was to make these ones a bit more concise.

FD: It’s been a big 2019 for you already – you released an EP, became a Best Soul Band nominee for Westword AND you’re opening City Park Jazz. That’s a huge stage. How did that come about?

EM: Thank you so much! We feel extremely honored to have been nominated again this year. We recently signed with an agent named Andy Fitzgerald at Nimbleslick Entertainment. It’s a very nice collaboration because he was a colleague of ours at school. It makes a world of a difference to have an agent representing you and I think every hard-working and deserving band should look into it. It’s so hard to hustle for yourself and not get a little jaded or hopeless. Once we released the EP, things really started rolling for us. Andy pitched us for City Park jazz and we are so incredibly humbled to have actually gotten the gig. We are in shock ourselves and won’t take it for granted.

FD: Talk about the Colorado music scene a little bit — What you like about it, what you wish was different, etc.

EM: The Colorado music scene is so supportive and fun. I love the group of musicians that come out to every show and support and have nice things to say. No one ever hesitates to help each other out and make connections. At the same time, I think this sometimes this leads to less versatility in bills that you see. Many times it’s often the same set of bands on the same lineup, and in turn the same group of friends/fans coming to each show rather than expanding the audience. This is something we are trying to figure out too. We want the same people to come out who always support us, but the goal is to always have our music and live shows reach new ears and eyes.

Emma Mayes and the Hip play June 2 at City Park Jazz. Admission is free. The EP LIttle Black Thoughts is available on all major music streaming services. Keep up with the band at facebook.com/EmmaMayesAndTheHip.