Off Menu with Mike Arnold | Injoy and Leslie White | The Roost 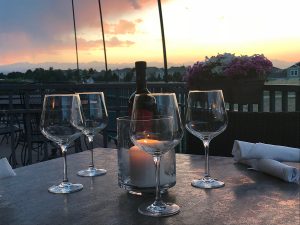 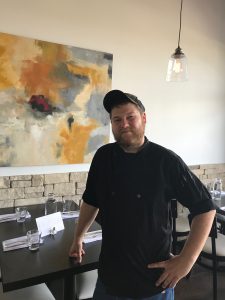 He’s either a Colorado boy from Tennessee or Tennessean from Colorado; either way his heart is split right in half and rooted in both places. That could be a weird thing depending on how you look at it, but it’s a good thing for Erie because Mike is the new chef at Injoy Tavern Restaurant on Baseline and Village Vista drive.

When I say “new chef” I mean they’ve had three (a surprisingly high turnover) and they’re barely about to have their one year anniversary on May 4th. Note that they won’t be sounding celebrating it till early June though, so keep an eye out for that party. To hear Mike tell it, the last chef was a friend of his and really just got tired of the drive from South Denver. But Mike is not the last chef, and Mike’s a country boy, a southern boy, to some degree. He’s definitely a nerdy boy, with his history of competitive Magic the Gathering tournaments and oddly comfortable Nietzschean philosophy quips. He’s also a fan of driving and, while the restaurant has one of the loveliest little lounge spaces for guests in waiting, couches that are pull out as well, he hasn’t opted to use one yet because he always makes it home.

Mike’s about to turn 30 years old and he went to culinary school right out of high school. That’s how it happened. It’s not as easy a decision for many of us who ended up in various levels of college trying to nail down exactly which major was going to serve us best.

“I didn’t know what I wanted to do my whole life and it turned out, what I do with my life is exactly the first thing I ever did,” Mike says. He was lucky to realize it early on.

Traveling back and forth from Colorado to Tennessee over six summers, he moved from being an Anne of Green Gables to a Last of the Mohicans type, to use a metaphor all my own. In fact, when he first got to Tennessee as a kid he was helping make and bottle preserves, moving it to the basement for storage. He moved up and by 12 years old was hunting and butchering (for the first time) in the field. He’s got a lot of butchering under his belt now, lauding the region now for its return to butchering roots. We talked about Blackbelly, Old Major, and other places that emphasize the in house practices over 100 percent importation of pre-butchered meats. That’s probably why Injoy has some of the best cuts of any place I’ve been in the area. That may be a surprise admission from me, but we call it like we see it.

Some chefs I’ve spoken with have talked about the problem of becoming a place that you only have for celebrations and birthdays, or anniversaries, because the price point is too high or the image to highfalutin. Balance that idea with what other chefs have called the desire to be a daily eater, a regular place for meals, and a local joint, and you have Injoy.

You have the incredible food, the goodness of high quality presentation, and the downhome goodness a guy like Mike brings to the kitchen. He’s not as much of a teacher as he wants to be, but something tells me he’s well on his way to it. Teaching in the kitchen, of course, can only happen when time permits. For a busy kitchen like Injoy’s, sometimes taking over and getting it done, expecting staff to know the ins and outs, is all that time permits.

He jokes easily about games like Edward Forty Hands, where – predominantly in college ages – folks would tape forty ounce beers to their hands and see who could finish first. Those days of carefree madness are gone, and that’s something he’s happy about, glad to be able to sit down for a couple of good whiskeys with the chefs he knows across the region, many who graduated culinary school with him. The last show he remembers going to was Dave Chappelle’s concert, when Chappelle was 40. Dave Chappelle is 45 now. I agree that Mike needs to get out more, but he’s doing exactly what he wants to do, what he loves, and – it appears – exactly what he was born to do: bringing excellent ideas, incredible spirit, and a whole love of flavor to a local kitchen. For now, we’re glad that kitchen is in Erie, Colorado.

Leslie White has to be the most interesting chef I’ve spoken to. And I don’t just say that because there was a significant portion of the conversation that is off record for reasons that I can’t go into. 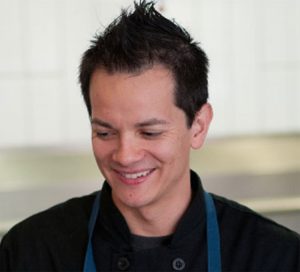 He’s also just a generally strange, cool, humble guy. I love meeting people who admit to being a little bit lost when they were young. There’s something wonderful about chefs that were born to cook; raised with passed down recipes and in the kitchen following a passion to the endpoint of amazing creations we all get to enjoy. There’s something slightly cooler about a kid who comes from a mixed-race family with a war bride mother who got a full ride to college but realized two years in that the people around him sucked and why would he continue in their career path to spend a life people that sucked.

I find that absolutely hilarious and also very telling about the kind of man that he is, the kind of man that is socially awkward and prefers the intimacy of small groups of friends around a D&D table, video game headsets, and a well balanced life. By balanced I mean he could have his own Brady Bunch t-shirt, given that he has four siblings, his longtime partner – going on four years of engagement – also has four siblings, and together they have four children.

He’s not the kind of guy that you would expect to be head banging at a show, in spite of the rat tail, even if he does get excited when you bring up Christopher Walken and Dennis Hopper’s exchange in True Romance and, let’s be honest, anybody that can walk away from a full ride to pursue an actual passion is exactly the kind of person who’s making food from deeper than fingertips and the taste buds, and more from the heart.

Leslie didn’t know what do you want to do after he dropped out of college, but his sister recommend culinary school. My first, reasonable thought upon hearing this tidbit of family trivia was that his sister had recognized in him a skill set that he hadn’t seen in himself, perhaps an unnoticed love of exploration in the kitchen or some other awesome little quirk. In fact, Leslie tells me, he didn’t grow up in the kitchen and was never really interested in it; his sister just wanted a chef in the family. Don’t we all.

He’s the kind of person with a serious amount of follow-through and a disciplined mind – cultivated by having a classic Asian tiger mom and a military father, coupled with a decade of martial arts training in childhood, taking on culinary school like he was trying to chop and kick his way through it – though only the chopping was necessary. Now he’s been cooking for 15 years, even if he only looks about 15. He’s 35 now, or their about.

Since culinary school, and following the Jennifer Lopez adage that men are generally useless till 30, Leslie didn’t get serious about his career till 28. He’s seven years deep into that, with a focus on forging ahead in his career and providing for his family. His family, by the way, is adorable. Four kids to speak of, and here I am interviewing Leslie at the Roost in between lunch and dinner rushes, and he’s sitting in the booth halfway through our conversation with a four month old and 4 year old. I’m guessing ages. His twenty-year-old daughter (she’s a step daughter but he’s raised there since 7 so… she’s his) is a hostess.

The Roost is officially a family endeavor for him. The kids are impossibly cute and Incredibly well-behaved, sitting at a booth in a restaurant while two grown men discuss music shows, family culture, dancing, the Vietnam War and refugees, and his history of fine dining experience. Conversations that take on a life of their own are the best kind, and this conversation was one of my favorites with a chef so far. He told me that he was worried he was too socially awkward to even do a good interview and it amused me because being socially awkward doesn’t make you bad at interviews, but probably more likely to be honest and unpretentious in what you say.

He’s had long stints at the famous Boulder staple, Greenbriar, Zeal, and other places. Having lived in Longmont since he first moved to Colorado, and aren’t we almost all from somewhere else, The Roost is the first place he’s worked at in Longmont. It’s an amazing upgrade to his life because now he works about a minute from his house. I told him that means he could bike to work. It means less stress, less commute, less impact on the earth, more family, more community, and building something meaningful in the place he calls home.

It all works because, at the end of the day, Leslie it’s a low-key dude. Everywhere but in the kitchen.