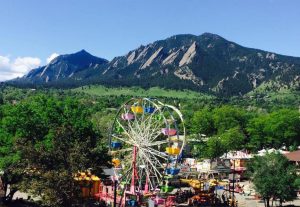 What do Bonnie and the Clydes, The Alcapones, the Lionel Young Band, Jyemo Club, and the Dead Phish Orchestra all have in common? All of these killer local bands are performing at the unofficial kick-off to summer: The perennial Boulder Creek Fest.

Every Memorial Day Weekend (May 25–27 this year), the area running along Boulder Creek from 9th to 14th St. between Canyon and Arapahoe Ave. becomes the epicenter of music, food and culture in all of Boulder County. Three days of community gathering usher in our favorite time of year, so grab the kids and get some sun. Admission is free, but you gotta RSVP at bouldercreekfest.com/.

On Sept. 22, 1862, President Abraham Lincoln signed the Emancipation Proclamation —  setting Jan. 1 1863 as the official date for the release of all enslaved people throughout the former confederacy. But Texas, being geographically isolated from the rest of the South, hung on for two more years, until finally liberated on June 19, 1865 by the Union Army. In celebration of that date — the day when the entire nation finally stood free of the scourge of slavery — the Historically black neighborhood of Five Points in Denver hosts one of the biggest Juneteenth celebrations in the nation. It’s a fantastic summer festival filled with educational events, unparalleled music and some of the best food Colorado has to offer. And it’s free for the whole family. Head down to the neighborhood at 25th and Welton on June 15–16. Check out www.juneteenthmusicfestival.com for more information.

The Wizard of Oz at Jesters Dinner Theatre

Get ready to tap your heels together three times as you introduce a whole new generation to this beloved classic. Everyone’s favorite Kansas girl is back on stage in The Wizard of Oz, brought to vivid technicolor life by Jesters Dinner Theatre. Enjoy the story of Dorothy Gale and her magical trip over the rainbow as you enjoy all your favorite songs, from “If I Only Had a Brain” to “Follow the Yellow Brick Road” and “The Merry Old Land of Oz.” Now playing at Jesters Dinner Theatre through July 7. 224 Main Street, Longmont. 303.682.9980 or www.jesterstheatre.com.

One-half of the politically charged, racially relevant, socially awake rap duo Black Star, Talib Kweli’s lyrical genius and stylistic flow have kept the hip-hop superstar relevant for more than 20 years. Through myriad side projects, the riveting film career of his partner Yasiin Bey (formerly Mos Def), and the inalterable march of time, Kweli’s only gotten smarter, sharper and stronger with age. Catch him live on June 6 at the Fox Theatre, 1135 13th St., Boulder. Doors at 8:30, tickets are $22+, www.foxtheatre.com for more information.

Romeo and Juliet at Dairy Center for the Arts

The Peak to Peak Players present a classic of their own with their upcoming production of Romeo and Juliet. The Bard’s timeless tale about family feuds, mortal enemies and passionate love is being presented by a very strong, young cast – including 17-year-old Grace Pouliot as Juliet and 23-year-old Chris Van Winkle as Romeo. The production also features a cameo appearance by dancers from the Boulder Ballet. Tickets are $15 or $12 for students. May 25–June 2 at the Grace Gamm Theater in the Dairy Center for the Arts. 2590 Walnut Street, Boulder. 303.444.7328 or www.thedairy.org

“Let us play?” Those three words – spoken whenever they crashed jazz clubs in the Boston area looking for a gig – germinated the seeds of what would grow into Lettuce — the Berklee-bred funktet of top-caliber musicians that has backed up nearly everyone who’s anyone over the last 25 or so years. They just finished up work on their 6th studio outing, Elevate, which drops with a big bash at Red Rocks on June 15 at their 4th annual Rage Rocks show. This year’s production includes a full set of Jerry Garcia covers to complement the debut of their new album set. Elevate was recorded at Colorado Sound Studio by Russ Elevado (The Roots, Erykah Badu, D’Angelo) so the Centennial State factors deeply in this outing. Tickets are $39.75+, show starts at 6 p.m., www.redrocksonline.com for more information.

The Northside neighborhood of Denver is one of the fastest changing neighborhoods in Colorado and Su Teatro Cultural and Performing Arts Center is exploring that rapid change and important local history through its upcoming production of Northside by Bobby LeFabre. The play tells the story of two local couples who vie to purchase a home in a rapidly gentrifying neighborhood while one family fights to return to where they grew up. The play asks the question “What happened to the Northside we used to know?” see it June 13–30 at Su Teatro Cultural and Performing Arts Center. Tickets range from $17 to $22. 721 Santa Fe Drive, Denver. 303.296.0219, www.suteatro.org.

It’s summer! Which means it’s time for grilling! This month: the top 5 things to throw on your grill!