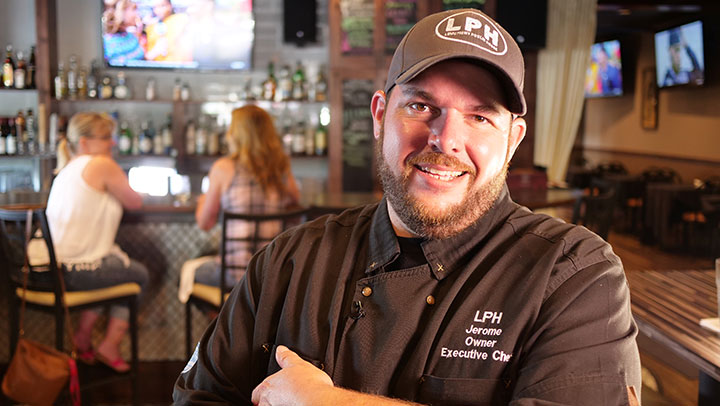 Food. And earth. And soul. These are the basic ingredients to life for Executive Chef Jerome of the Longmont Public House (LPH). The ingredients to success are an important thing to consider, especially for a chef. Ingredients are the bread and butter of a restaurateur.

It’s not just food. Food matters. The importance, the nuance, the love, was passed down from his grandmother. Jerome remembers being in the kitchen helping with each step as she made a 7-course meal from empty cupboards and laughs with the recollection that she always remembered your birthday meal.

It’s not just Earth, even though Chef knows that all good things come from the Earth. Everything we consume comes from the Earth, and the earth should be respected, that places like India (a place he’d love to return to) have the most underappreciated amounts of spices, ingredients cultivated from Earth to turn that extra little pinch into that extra little umph.

It’s the three together.

He’s an emotional man, existential, prone to deep thoughts and long remembrances, drawn to fond memories about the world and the people around him, a man who steps up to plates that other men would say are not theirs. He recently had to deal with the stress and the hurt of a divorce while starting LPH restaurant with his former partner. She had a stroke in the middle of the process and he identifies as a single father, to both his son and to hers.

He still wants to be a father, grandfather, friend, neighbor, son, executive chef, because these are all him; even if some days he just wants to be the line cook. His favorite day of the week is Monday, because no one’s around. Stirring the pots, chopping, the silence, the music, the love of it all is his meditation, his faith, a religion of sorts. 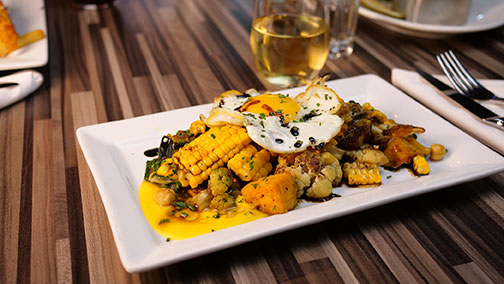 The facts of his life are interesting; a boy born and raised in Colorado and Iowa, spending his life “stretched out”, as he put it, between the two, both places where he has deep roots. He spent time in Singapore where his parents worked as engineers, where he recalls staying at the Westin. He told us an origin story, of sorts, of sneaking his way into the Westin’s kitchen, tasting the contents of a pot, and remarking aloud that it “needs salt and needs sugar”, then running out when the Lurch-like chef appeared. The chef came out with security to find him by the pool with his parents, took him back to the kitchen, and confirmed that he was right, at 13 years of age, and subsequently offered him one of his first jobs in a kitchen.

The man is about foundations, whether it’s the foundation of a romance or a meal. It’s oftentimes where they intersect: he once spent six months making toffee cake variations for a woman in culinary school because she was a pastry chef and he wanted to take her out. When we tasted it at LPH, we were absolutely shocked with how good it is. It reminded us of the movie with Sarah Michelle Gellar, Simply Irresistible, where all of her emotions ended up in the food, making people cry, or float, or fall in love.

Chef Jerome was a little hard to get ahold of at first, offering only a half an hour for conversation, a half hour he was late for when arrived at LPH. But when he sat down, it was like he wanted to unburden himself, offering a waterfall of memory and emotion and intensity, and incredible amounts of empathy for the people around him. And plate after plate of decadence. We ate while we were there, but that is a secondary concern to the man himself.

Some chefs, for example, are strict with their kitchen staff, expecting them to know everything and get it right the first time. Some chefs are teachers and want to instruct, which can feel remote. Chef Jerome may be a combination of the two but leans towards understanding. “I don’t care if you make a mistake, I care how you recover from the mistake”, he tells us. “No one’s going to remember the mistake. They’re going to remember how you pulled out of it”.

And that’s important, because our local culinary scene has made plenty of mistakes. Boulder County is working very hard to not support local chefs and the restaurant scene is struggling to afford rents while competing against each other in an oversaturated market. Lots of mistakes. I can tell you for certain, one place that is not a mistake is the Longmont Public House.