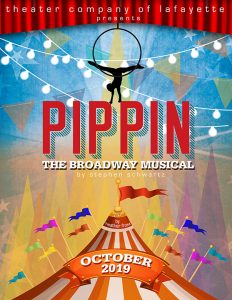 Pippin at Theatre Company of Lafayette

Pippin is, at its essence, a very simple story – all about a young prince and his  search for meaning and significance in his life. However, as told by the brilliant Stephen Schwartz, this classic 1972 musical became a perennial favorite of musical fans all over the world. Coming up, you’ll be able to see Pippin thanks to the Theatre Company of Lafayette, and you’ll get a much closer and more intimate production than you might have gotten if you’d seen it at, say, the Buell Theatre when it toured a few years ago. Go online to read Mike Martinkus, playing the role of Pippin in this production, talks about how he prepared for such a demanding role and what to expect when you see the show.

This year marks the 45th anniversary of this annual foot race to benefit the City of Longmont Recreation Services Youth Scholarship Fund. With both a 10K and a 2-mile long option, there’s enough of a challenge to appeal to real long distance runners, but short enough that even novice runners can get in the game. Both races start and end at Altona Middle School, 4600 Clover Basin Drive in Longmont.

The Importance of Being Earnest at Coal Creek Theatre

Coal Creek Theatre in Louisville is presenting another beloved classic this season in The Importance of Being Earnest by Oscar Wilde. The show is about two bachelors who take on the alter egos of men named Earnest. They then, coincidentally, meet two women who will only love men named Earnest. The story weaves an elaborate plot set in Victorian times with some of the most clever characters to ever be written for the stage.

The Realistic Joneses at the Dairy Arts Center

When it premiered on Broadway, the New York Times called The Realistic Joneses the “most stimulating, adventurous and flat-out good play to be produced on Broadway this year.” Now, you can see this exciting new work thanks to Boulder’s Ensemble Theatre Company, which is always at the forefront of compelling new scripts. The story is about two sets of neighbors who live in identical homes and have identical last names. As their lives intertwine, they families must decide between  their fantasies and reality.

Flame Broiled, or the Ugly Play at the Dairy Arts Center

Another exciting, brand-new script to premiere in Colorado this month is Flame Broiled, or the Ugly Play – a dark  satire that examines race and identity politics in American society. Within the packed script, just four actors portray more than 30 different characters in a series of fast-paced scenes designed to provoke, shock and highlight the issues of prejudice.