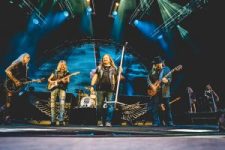 We don’t often run an interview after the band’s show, but it’s not every day we get to chat with one of the founding members of one of the most popular rock bands in American history — a Rock and Roll Hall of Fame inductee, the progenitor of the Southern Rock sound, a Grammy Awards Hall Of Fame inductee — on their farewell tour. Lynyrd Skynyrd’s mythos looms larger than even their enormous stage presence. From a 50-some-odd-year-long career with a repertoire that includes iconic Southern Rock hits like “Freebird” and “Sweet Home Alabama,” to the 1977 plane crash that killed half the band, to their increasingly uncomfortable and unshakeable tie to the Confederate flag, Lynyrd Skynyrd may have carved their visage into the monument of Americana — but can’t shake the truth that America today is a very different place than it was in their hey-day of the 1970s. We caught up with Rickey Medlocke (Skynyrd drummer from 1971-72, guitarist since 1996) moments before their Sept. 21 show at Fiddler’s Green in Denver, where he waxed nostalgic about the band’s place in history, the divisive political climate we live in today, and whether or not this tour is really “farewell.”

French Davis: You’re on the homestretch of your farewell tour. What does it mean to you that this crazy ride is coming to an end?

Rickey Medlocke: Well, first of all, I think this tour is actually going to fall over into next year. Because, given all the attendance records and everything that’s happened with the fan base since we announced this, there’s so many other places to go. Europe wants us to come back because we only hit one part of Europe… We still got to do dates in Canada. Looks like we might be going back to Australia and South America. And plus more dates in the United States. But with that being said, like Johnny (Van Zant, frontman) likes to say, “It’s not a farewell, it’s just ‘till the next time.”

FD: So it’s not really a farewell tour?

RM: The deal about it is, and it was pretty well common knowledge, that Gary Rossington (founder, guitarist) had been having some heart issues the last 10, 12 years. And we decided in 2017 that this was the best way to go because he just didn’t want to do 80-to-100 shows every year. With the travel and all that stuff, that’s a rigorous thing to do. We decided we would say farewell to going out every year and touring that way.

FD: So we can expect more from Lynyrd Skynyrd in the future?

RM: We want to make more records. The band will stay intact as-is and probably do some special events here and there, or maybe some residencies, like out in Vegas, which would make it easier on us to be able to play a Lynyrd Skynyrd show and people come and have a good time in whatever city or country the band’s doing it in.

FD: Clearly there is no slowing you down.

RM: The funny thing about this all is — when you’re a musician that’s been playing for as long as we’ve been playing, you just don’t wake up one day and say, “Okay, I’m going to put my instrument down that I’ve had this big love affair with for 50-60 years,” and not pick it up anymore and not want to play music or anything like that. And I saw a very interesting article (with) Merle Haggard. (The interviewer) asked, “Why is it that you go out here and do this every year? You don’t need to.” And he said, “Because that’s what I do. Music is what I do. Being on stage with a guitar and singing songs that I’ve sang all my life, that’s what I do.” And it’s the truth. I can’t imagine not picking up a guitar and playing. As a matter of fact, right before you called in, I was at about 45 minutes of sitting and just playing. I do it every day. But as for the tour, I would say the heavy touring is over with. The last two years, we’ve made it a really easy on Gary to go out and still play and have a good time and keep his health intact. We’ve been doing Fridays and Saturday nights. We’ve been doing the weekends. And it’s made it so much easier and actually a lot more enjoyable because all of us are able to be home. Some of us have large families. Gary, Johnny, Peter (Pisarczyk) our keyboard player… And they want to actually be around and see their families and stuff like that. So they’re able to go out, continue Lynyrd Skynyrd and then come home and have a few relaxing days. And then we’re right back at it again. Me, I’m a road warrior. This “Last of the Street Survivors” farewell tour is to end the really heavy touring every year. Then once it’s over with, maybe we’ll take a year off, record some new music. And we’ll then we’ll see about getting a new record out, and then we’ll see where it goes after that.

FD: When you look back at this incredible career, what do you think is the most important legacy that Lynyrd Skynyrd leaves?

RM: Well, I believe without a doubt, it’s all the great music that this band has had in its history. Ron and Gary Allen, other people with them and even up to today with Gary, Johnny and myself, we’ve written all this music that I believe has always stood the test of time. And I believe will be here a lot longer after we’re all gone. When you’ve got iconic tunes like “Free Bird” and “Sweet Home Alabama,” “Simple Man,” and “Tuesday’s Gone,” “That Smell,” and “What’s Your Name?”… I could go on, and on, and on… It proves how great those songs really are and always have been. It draws an incredible wide range of age groups. I mean, every night we play, we look out and we see parents bringing their children, and their children bringing their children. And I mean, it’s like a four-generational thing now. And when you see people out there from 10 to 70, you just go, “My God, man, the music has had such an incredible impact on all these audiences.” You know what I mean? So I think the legacy that this band will leave behind is all the great songs that it created.

FD: It’s probably fair to say that we’re in a heavily divisive political climate right now. And if Skynyrd’s music could have an impact on this cold civil war that we’re in, what would you want that to be?

RM: Well, first of all, I don’t like to use the band as a platform to speak out and to lay blame to anybody. I’m over two-thirds, maybe three-quarters Native American. And I definitely have my opinions and thoughts on the government. Natives were never treated the best in the world, you know? And I’m starting to wonder to myself, after I’m gone and the generation behind me is gone, really what is going to be left? And if we’re headed down this road of where a lot of people are wanting to head down, it’s been proven time and time again that a lot of the political beliefs that people are embracing and stuff just doesn’t work. The thing is, if you’re going to say, “Down with capitalism and up with the other,” … Capitalistic people invented cars, capitalistic people invented the cell phone that you’re using, and the computer that you’re using. And right down to the TVs that you’re watching. Everything was invented in a capitalistic market. So if we’re going to go the other way, I guess what everybody should do is just throw away all these things and get rid of everything you’ve got that is a pleasure to use, that gives you instant gratification. Get rid of it all and try it that way. You know what I mean? Let’s start living off the land, let’s go back and live off the land and do all those things that the dark ages had. I can’t help but think that everybody’s got their own selfish agenda. It’s all me, me, me. And I find that to be really sad. I know that you and I could sit here and talk about this for hours, and really where would you and I get? You know what I mean? But I know one thing, if you could take anything from Lynyrd Skynyrd’s music in today’s world, don’t you think it would be great? I see everybody every night come together, no matter who they are, no matter what side of the aisle they walk on, and no matter what their political beliefs and their religious beliefs are, and so forth and so on. And they come together for what? One thing and it’s called the music. The music brings them together. I wish there was a musical something that could bring all of us together. We used to be called the United States, and right about now we’re called the Divided States. And I don’t know, it’s weird to me, it really is. And I just hope that we somehow one day get on a common ground and stop the rhetoric and stop the fighting before it’s too late. And there’s all kinds of stuff going on in the streets that we might be regretful of later on in the future.

I go out here every night and play a guitar and I play it for everybody of all denominations and all beliefs and all that stuff. I don’t watch the news. If I want to read about it, I read about it a little bit on my phone.I’m a guy who loves to stay deeply buried in the music and family and fishing. And music. So there you go. That’s Rickey Medlocke. Like I love my bloodline. I’m very proud of my blood line, and I try to do stuff for my own people and try to help out whenever I can, and let it go at that. You know what I mean?