A DiverCity conversation with our only  youth nominated subject, a woman raised on reservations, with reservations about Boulder County until she found community in Boulder. She’s dedicated her life to building that community, and uplifting those voices, across the nation. 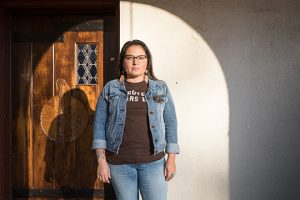 If you ask Elicia Goodsoldier “who are you” the answers she gives are less about her than about her work. “I live in Niwot, in Colorado for about 10 years, but originally I’m from Arizona. I’m from a little community called Lupton. It sits on the New Mexico-Arizona border. I was born in Gallup, NM, and raised on the Navajo Reservation by my grandparents until I was about 12. My mother is Dine and Spirit Lake People/Dakota. And my father is Mexican.” A bit about birthplace, because geography matters in Native land, and then she skips ahead to college at Arizona state, where work begins.

She was looking for community, noticing the difference between being in Phoenix, with 26 tribes represented across that region, and being here. Fredrick-Firestone, when she first arrived ten years ago, “felt like it was still in the middle of nowhere.” It was also very white, she says, and frightening. It still is.

“I just wanted to find community. Interestingly enough, I found community here in Boulder,” she says. It’s a claim that took me a bit by surprise. First working with Mental Health Partners, she was also involved in One Action: One Boulder, from Motus Theater. Their early focus was on Chief Niwot and the local racism and greed that resulted in the Sand Creek Massacre and the origins of Boulder. Our local origins are indeed genocidal, drenched in Native blood.

“How many people know the history?” she asks. “How many people understand the history of what happened here, how indigenous peoples were moved off the lands. What happened at Sand Creek and what followed after Sand Creek, and through the streets of Denver?” Elicia moved into work “understanding historical and intergenerational trauma, and looking at it from a traditional and cultural perspective. Really tying all of the issues that we’re facing today, in our tribal communities, to that; that it’s not something of the past, that it’s still very present for us.” 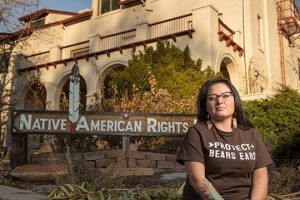 She jokes that she “was only sleeping in Firestone” back then, and “working here, being here in the community, trying to also raise awareness that indigenous people are still here.” The building we were in, NARF, is full of Native lawyers, she tells me. “It’s been here for 45 years now, and it’s because of these people here that we’re able to speak our languages and practice our traditional ceremonies. But people don’t know…They don’t realize that this place here is central in Indian Country”.

The bright artworks of native motifs around us speak to the scope and history of native work that has happened in these hard wood hallways. Serious faced men and women move from foyer to conference room around us, continuing the work Elicia speaks of.

Now, tell us why you are.

“I am because of my parents, my grandparents, my ancestors before me. I feel like I have a responsibility and a duty to uplift the voices of indigenous people, especially the ones that are most marginalized, those that don’t get the attention, especially on our reservations and our urban cities. I think a lot of people don’t realize that there are more native people living in cities than on reservations… The history that I did have came from the stories of my grandparents”.

“I owe a debt,” she says. “It’s not about me. I feel like it shouldn’t be about me or what I’ve done in the community, but really about how we need to uplift the voices.”

She recalls a conversation with her auntie about the Wounded Knee Massacre on Pine Ride. “On that morning, in 1890,” her aunt said,  “when all of our relatives were gunned down, and they threw all of them into this mass grave…we will never be able to measure the loss when those people were buried in that grave, because we don’t know what went with them. We don’t know the language or the words or the songs, the ceremonies. We’ll never be able to measure that. And we have a responsibility to do everything that we can to remember them and remember their sacrifice.”

I asked Elicia to focus on herself for a minute, on the human level experience with diversity. “We’re here; we’re just sort of hidden and pushed in the back. I laugh when people say Boulder isn’t diverse. It is..” she says. “Boulder County is diverse”, I push back. “Boulder is not.”

“I think Boulder is diverse, too. We have to stop saying that it’s not diverse. That 12 percent [of non-white folk in Boulder] is diverse. We’re here, we’re present, we’re doing the work.” Elcia is doing the work.

The main fight she has, she tells me, is “as an indigenous woman in Boulder, it’s frustrating. It’s not so much about being visible. I don’t need people to see me as an indigenous woman. The fight that I have with Boulder people is the cultural appropriation piece. It’s everywhere and it’s personal to me, because it goes back to the privilege. It’s so deep. It reminds me of right wing republican folks, where nothing you can ever say, ever do will change their minds. There’s this belief that they have every right to do that, but call themselves liberal. They say they stand behind people of color, but they don’t listen.”

White girls in headdresses. White men calling themselves shamans. This is racism. Being visible is important for native folks, becuase we are so often erased. This is the fight that Elicia is engaged in.

We’re thankful for that this Thankstaking.