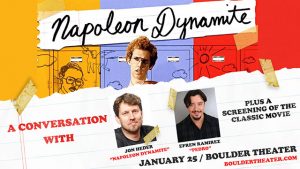 Capturing lightning in a bottle is one of those things that pretty much never happens intentionally. And it’s hard to find a better real life example of the time-honored cliche than the story of Napoleon Dynamite, the 2004 indie comedy shot for a total budget of around $400,000 that ended up grossing more than $46 million worldwide as it rocketed to cult ultraclassic nearly overnight. Jon Heder — who played the title role — reportedly earned $1,000 on his original agreement to play the role (he later was able to re-negotiate and get a decent share of the pie). Now, more than 15 years later, Heder and Efren Ramirez (Pedro) are touring with the film, providing a talkback with audiences after the viewing. Seize this unique opportunity Jan. 25 at the Boulder Theater. Doors open at 6:30 p.m., tickets start at $35, www.bouldertheater.com for more information.

The Songs of Rodgers and Hammerstein at the Longmont Theatre

Enjoy the classic songs of Richard Rodgers and Oscar Hammerstein when Longmont Theatre offers Some Enchanted Evening: The Songs of Rodgers and Hammerstein from Jan. 10–19, 2020. This beautiful collection of music from two of Broadway’s biggest and most prolific composers delivers all your favorites on stage at the same time. The show includes such timeless classics as “The Surrey with the Fringe on Top” from Oklahoma, “In My Own Little Corner” from Cinderella, “Sixteen Going on Seventeen” from The Sound of Music and so much more.

Tickets are $25 at www.longmonttheatre.org. Performances are at the Longmont Performing Arts Center at 513 Main Street, Longmont.

The Theatre Company of Lafayette is presenting the Kurt Vonnegut, Jr. classic Happy Birthday, Wanda June from Feb. 14–Feb. 28. The zany comedy involves a story about a young mother whose famous adventurer husband is thought to have disappeared in the Amazon years ago. Just as two new suitors are showing her interest, her husband mysteriously returns — on his birthday. Chaos, of course, ensues. Tickets are $24 and are available online at www.tclstage.org or by calling 800.838.3006. Performances are at the Mary Miller Theater, 300 E. Simpson Street, Lafayette, CO 80026. 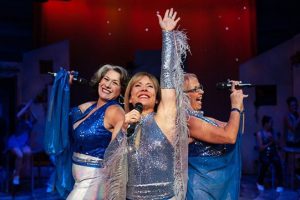 Now playing through Feb. 22 at BDT Stage is the smash hit musical sensation Mama Mia! Based on the songs of ABBA. This jukebox musical — filled with tons of popular ABBA hits — tells the story of a young woman’s search for her birth father on a sunny and beautiful Greek island. On the day before her wedding, the young bride-to-be discovers that her father may be one of three different men, so she invites them all to her big day. Tickets range from $55 to $68 online at www.bdtstge.com or 303.449.6000. BDT Stage is located at 5501 Arapahoe Ave. in Boulder.

For more than a quarter of a century, Ozomatli’s Latin rock/hip-hop/reggae/worl-fusion/funk sound has carved its own deep niche across myriad genres and social activist causes — most specifically immigration and farm workers’ rights. So their timing couldn’t be better for a stateside run, where Trump’s tarriff war and assault on immigration is simultaneously destroying thousands of families and ravaging independently owned farms across the nation. The band is performing new material — their most recent single “El Otro Lado dropped last April — and will be heading into the studio in 2020 to record their 8th studio album, so expect a solid mix of crowd favorites and as-yet unheard material at this one. Feb. 15, at the Fox Theatre, 8:30 p.m.. Tickets are $22.50, www.foxtheatre.com for more information.

Tom Waits is one of those eclectic artists you either absolutely adore and seek out every chance you get … or you don’t get him at all, nor understand anything about his music. That kind of cult status is what’s kept him shrouded in a hint of mystery throughout his career — he’s a bit of an enigmatic troubadour with a penchant for vaudevillian antics and a dark sense of humor, drenched in Americana self-deprecation. What you may not know is Colorado has its own Tom Waits tribute band called Lost Dog Ensemble, featuring frontman David Dinsmore and sax maestro Troy Thill, to name a few, who do an incredible job of sending up Waits’ unique, gravelly vocals and musical acrobatics.

Catch them Jan. 24 at Oskar Blues in Lyons, www.oskarbluesfooderies.com for more information.

Bloomsday at Dairy Center for the Arts

One of Boulder’s most popular theatre companies, Boulder’s Ensemble Theatre Company, is offering up a different look at the classic romance play. Bloomsday, by Steven Dietz, tells the story of a man named Robert who returns to Dublin to reunite with a woman who stole his heart during a literary tour 35 years ago. The show then moves backwards through time, as the older couple retraces their lives to learn more about their younger selves. It’s a time travel, love story filled with comedy and heart. Catch it Feb. 6–March 1 at the Dairy Center for the Arts, 2590 Walnut Street, Boulder. Tickets are at 303-440-7826 or online at www.betc.org.