French Davis – A Master of Many 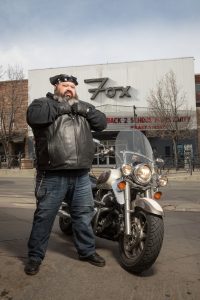 The first in our Ourticles series, a wide ranging conversation with the longest tenured Yellow Scene employee, Colorado’s most notorious entertainment writer, and the man who gets the most hate mail in the office. Dave Flomberg is his name, French Davis is his…well, other name.

Dave is an enigma. Except the complete opposite, fully exposed, open, raw, and real…just complicated, with a lot of moving parts. It’s hard to figure how it all fits together, or where it all came from. He’s an award winning writer, a musician, a boyfriend, a doggy daddy, a Purim festival organizer, an Oingo Boingo fan, and a casual biker. Listening to him talk, you realize he’s the renaissance man you’ve always heard of but never met, the jack of all trades as the adage was originally written: A jack of all trades is a master of none, but oftentimes better than a master of one.”

In his case, a master of many.

I had slept about 1 hour the morning I met with Dave to discuss his work and history with Yellow Scene Magazine. My photographer, Paul Wedlake, and I were hanging out in front of Fox Theater in Boulder at a frosty 7 am. Dave wouldn’t arrive till 11ish. It was a cold morning, with a hint of our early Spring in it, and the streets were mostly empty. Paul and I shared a table with a homeless man who was charging his phone at The Point Cafe, while we ate bagels and had a coffee.

Dave, I quickly realized, can’t help discussing Shavonne when asked, “who are you?” Shavonne is the publisher and she and Dave have known each other for decades. Dave is, without question, our longest tenured employee. He started on issue #2, he tells me, after Shavonne left Boulder Weekly to do her own thing. When asked again who he is, more pointedly, he starts with music: University of Northern Colorado, the University of No Color, he calls it, where they had the third best music school in America at the time.

That is where he started writing (for The Mirror) and discovered his love of reporting. He recalls the KKK on campus passing out “Ni**er Hunting licences” in 93, his hate for Greeley, fist fights with anti-Semites, and other reasons he transferred to Denver’s Metro State, where he got to study under Ron Miles, one of the best trumpet players in the state at the time. Dave plays the “Flombone” in two local bands.

He had stints at the Vail Trail, Boulder Weekly, City Search, Blockbuster, and currently pays his bills at Modus Persona. He wrote a book called Management for Zombies, edited others, won 3 Society of Professional Journalism awards at the Rocky, with a couple more awards with Yellow Scene. He’s a golfer and a music man. But it was his freelancing for the Westword, which – at the time – had a policy that you could only freelance for the Westword if you were writing for them, no outside writing, that gave birth to his alter ego. The no outside writing proviso led to the formation of Dave’s much more famous identity: French Davis.

But first, his father. Dave’s father is ubiquitous in his life in the way you know means he was more than a good father, but great; a friend to those around him, an ally and advocate, a man of principle and action in his every day. Beyond who he is, I asked him why he is. Dave says that, “I owe a lot to my father. He was a man of social justice, a very morally straight human being.” He comes from a Jewish background, with survivors in the family, cultivating a hatred of bullies and a willingness to stand in the gap for the oppressed, and to use his voice against the oppressors.

French Davis is one of the biggest names in entertainment reporting in Colorado. He’s interviewed everyone, from Merle Haggard to Jack Black, from Henry Rollins (a fave) to Margaret Cho and Lisa Lampenelli. He was starstruck interviewing William Shatner. There are too many to list, but the entertainment section isn’t just fun and games. Sure he interviews the biggest names, and sure he drops his list of best things to see and do in the month ahead, but he also pens the column that won him the awards: Duly Noted. It’s an editorial opinion column for which we receive regular hate mail.

Why? He uses it as a forum for taking on bullies. For what his upbringing taught him. “One of the things about having the freedom I have with Duly Noted,” Dave tells me, “is that it’s a non-stop forum for me to take that on… Humanity has always been at its best when it’s been at its most creative.”

One of those letters I mentioned came in anonymously, with exhortations for us to stop talking about President Trump or else. We laughed it off as another angry Trump supporter uncomfortable with facts. A few days later the Capital Gazette massacre happened in Maryland; that was June 28, 2018. We decided to take it seriously, recognizing that what French Davis was saying had impacts, had real world consequences, and – in other parts of the country, journalists were being murdered for similar efforts.

Look, Dave can chat. We covered similarities between the current administration and the rise of the Third Reich, his tenure at YS, lessons learned, the spirituality of Matisyahu, and the Purim festival he’s throwing in March (see: Scene Stealers, pg. 51). If you ever have a chance to read his work, do. If you have a chance to hang with him, hang. If you get to see his bands, Reptiles & Samurai and Tivoli Club Brass Band, see them.

He’s a master. A master of many, indeed.