Colorado Protests Get The Goods 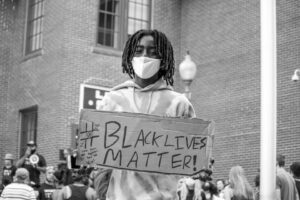 Their deaths at the hands of police are the latest to shock the collective conscience of our country, and their names have been lifted at protests nationally, internationally, and right here in Colorado. The protests have been sustained and intense, despite severe police response, and protests in many places, including Colorado, have gotten the goods.

In Minneapolis, where officers restrained Mr. Floyd while another officer choked him until he died, the city council is moving forward with a plan to dismantle the police department. City councilman Jeremiah Ellison says of this effort, “We are going to dramatically rethink how we approach public safety and emergency response.” And there is precedent to show such efforts to defund, reorganize, and reprioritize work, such as in Camden, New Jersey, with the result that “complaints over excessive police force . . . have dropped 95% since 2014.”

Colorado legislators returning to the Capitol amid lowered COVID-19 restrictions and ongoing protests did so about the same time that Tenth Circuit District Court’s Judge Jackson issued a temporary restraining order (TRO) against police in Colorado in response to a complaint of Denver police use of excessive force.

The order reads in part that “the Court temporarily enjoins the Denver Police Department . . . from using chemical weapons or projectiles unless an on-scene supervisor . . . specifically authorizes such use of force in response to specific acts of violence or destruction of property that the command officer has personally witnessed.” In support of the order in the face of property damage that had occurred during Denver protests, Judge Jackson also wrote that “property damage is a small price to pay for constitutional rights—especially the constitutional right of the public to speak against widespread injustice. If a store’s windows must be broken to prevent a protestor’s facial bones from being broken or eye being permanently damaged, that is more than a fair trade.”

Colorado legislators made quick work of codifying Judge Jackson’s TRO as part of Senate Bill 20-217, the “Enhance Law Enforcement Integrity” Act (“the Act”). Legislators went further, though, requiring e.g., that every police stop be documented and a reason for the stop be recorded. It requires police to acquire and use body cameras by July 1, 2023, and failure to activate the camera leads to “permissive inference in any investigation or legal proceeding . . . that the missing footage would have reflected misconduct by the peace officer.”

Perhaps the farthest reaching change, and a huge win for the people, is law enforcement cannot use qualified immunity as a defense in a lawsuit alleging violation of rights under the Colorado Bill of Rights, including excessive use of force complaints.

Protest in Colorado, has gotten the goods.