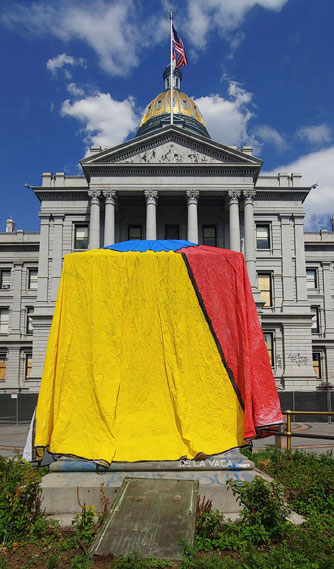 The governor finally announced a statewide mask mandate. It went into effect at midnight on July 16th. He instituted it citing data that supports wearing masks, a relaxing of social distancing in Colorado that has led to a spike in COVID-19 cases, and the impact of travelers from hot spot states, like, Texas. • Ball Aerospace, in Boulder, is among facilities listed as having a current COVID-19 outbreak. An outbreak is defined as two or more cases among staff or residents. The company has had three staff members test positive for the virus and two staff members who are believed to be probable. Bould had 30 new cases and 1 death on Tuesday, the largest single day numbers since June. • Boulder County Board of Commissioners, on July 15, extended the county oil and gas moratorium, angering the local oil and gas industry. Boulder County hasn’t had a well drilled since 2012. • Colorado is undergoing an incredible amount of drought, in spite of record snowfall and snowpacks from the 2019 Winter/2020 Spring. As of the week of July 16th, “95% of Colorado is experiencing some stage of drought or is ‘abnormally dry’ which is the precursor to official drought…The exception may be Boulder County where a disproportionate amount of rain this summer has kept the county in better shape than Colorado’s 63 other counties,” it has been reported. • Former Governor John Hickenlooper bested Andrew Romanoff in the run off to be the democratic contender in the Senatorial race to unseat Cory Gardner. Colorado Sun reports that, “A dark-money nonprofit affiliated with Democratic leaders in the U.S. Senate is the major funder of a pop-up super PAC that spent nearly $1.5 million to boost former Gov. John Hickenlooper days before Colorado’s U.S. Senate primary, according to new federal reports.” And that’s why we need money out of politics. • The D.C. Circuit Court of Appeals invalidated the U.S. Environmental Protection Agency’s designation of the Metro-Denver ozone non-attainment area, ruling that the EPA’s decision to exclude northern Weld County from the non-attainment area was “arbitrary and capricious.” The EPA has been ordered to reconsider its decision. • The Fourth of July was a spectacle unlike any in recent memory. Kyle Clark, of 9News remarked that he’s, “Been in Colorado a dozen years and have never heard a Fourth of July night like this. It’s nuts.”  •  A group of Denver Abolitionists gathered at the state capitol to pray for the removal of racist and genocidal statues. At the end of the ceremony, involing a medicine wheel and prayers by local native women and allies, the West facing plaque fell off. • The governor, citing an uptick in COVID-19 cases in 20-29 year olds, called for a “Summer of No Parties” and instituted a 10 pm last call for alcohol that will last for 30 days. No one is happy about it.

“There is a small window of opportunity. There is time, there is time to act. We are really on the knife’s edge. I’m hoping, for the people of Colorado, that this becomes a wake up call. The party has to end. Today, I’m signing an executive order, effective at midnight tonight, that requires all Coloradans, 10 and up, to wear a mask or face covering, whenever they’re in whenever they’re in indoor public spaces.”

“While local governments have the authority to regulate natural gas and oil development, they do not have the authority to completely prohibit it. By chaining together a seemingly endless series of moratoriums, Boulder County appears to have no serious intent to reopen the county to our industry.”

– Lynn Granger, executive director of the Colorado Petroleum Council, a division of the American Petroleum Institute.

“I think the election, the turnout showed that my relationship and my history, fighting side by side with leaders in the state of Colorado, is not something that people are going to cast aside based on some attack ads”

– John Hickenlooper, Senate candidate, after winning the primary. He didn’t mention the $1.6M in attack ads against his opponent in the last week of the contest.

“If it‘s necessary, I would urge them to wear a mask and I would say follow the guidelines.“

– President Trump, reversing his past position on mask wearing, facing a massive spike in cases across America based on inadequate state and federal responses.

74/1,745/138K  – Current COVID-19 Confirmed deaths in Boulder County, in Colorado, and in the United States, respectively

110 – Days, at the time of this writing, till the November 3rd, 2020 election, when America makes a choice about its future