Fight or Flight: I did not hear you. Don’t shoot. 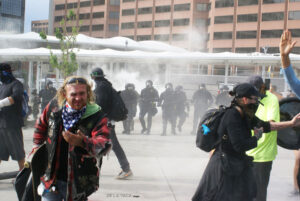 The other day I was at a protest and began filming just before an arrest occurred.

I stayed close to the conflict zone between police and protesters. I realized suddenly when people started yelling and reacting to being pepper-sprayed in the face that I was about to likely get sprayed myself, and turned away in time to avoid it.

I write because the experience taught me something about why people may not respond to police orders. I watched my own video later and clearly heard, four to six times, a person yelling directly next to or behind me, “Mace, they have mace! Look out, they’re about to mace you!” or some such.
I didn’t hear any of it when it was happening. I was hyper-focused on what was happening to the person being arrested (whom Denver PD took to the ground and ground their knee into the neck of, George Floyd style).
If I could be so unaware of what was being yelled directly next to me, so must that be true of people in fight or flight mode when police yell commands at them. Thus when people ask, why don’t victims of police violence just follow orders, part of the answer is clearly, from my experience, that they aren’t registering what’s being said to them. They are hyper-focused in a way that evolution has determined is best to preserve their lives, but we didn’t evolve to have people with guns shoot us for failing to listen to their words. We evolved to confront head-on (fight) or run from (flight) danger.
Police are a construct and violent force we haven’t evolved to respond to and are an unnatural and existential threat.
That’s a significant reason why we need non-violent alternatives to armed men and women in blue given near-carte-blanche to kill when THEY are scared (fight or flight response works both ways).
Responders need to be skilled at bringing down tensions and dissipating this evolutionary response, to assure any person their life is precious and they are going to be treated as such.
Darren O’Connor is Regional Vice President of the National Lawyers Guild SW Region and a practicing attorney in the areas of eviction defense, family law, criminal defense, and civil rights. He is the criminal justice committee chair for the NAACP Boulder County Branch. He can be reached at DOLawLLC@gmail.com