Off Menu with Diann Rennicke | The Flight Deck 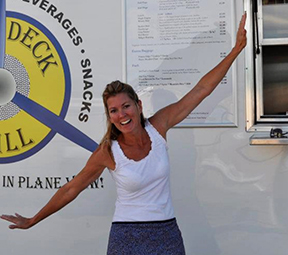 Colorful small planes take off as Flight Deck Grill owner and chef Diann Rennicke preps robust breakfast for customers standing in line. Situated down an unassuming road at the Longmont’s Vance Brand Airport, the Flight Deck Grill is housed in a food truck nicknamed “Tinker” which sits semi-permanently in a charming corner of the airport.

Customers here are lucky that owner and chef Diann Rennicke decided to take a chance on something so far-fetched from her original flight plan in the tech industry.

Rennicke came to this unique place in Longmont aviation culture from the tech world – a career far from the grill. She put in almost thirty years at IBM before investing in the Flight Deck, which she calls a ‘Rigstaurant’.

“Never did I realize I was in the wrong career until I started the next,” she said about changing careers. One can imagine the contrast by taking a seat at the Flight Deck. The outdoor elements, though normally mild during season, add a sense of risk a person would never get under fluorescent office lights and in a cubicle.

Big Band music bounces from speakers, punctuated by the occasional buzz of aircraft taking off into the blue. Pilots gather and chat just yards from tables where diners eat generous portions of fresh grilled food. Yellow and blue décor add a retro punch to the nook with festive directional signs pointing to Dublin, Sydney, Tokyo, and Nairobi.

Diners drink the Flight Deck coffee, aptly called Jet Fuel. The majestic Rocky Mountains serve as the backdrop as the white sunlight reflects off of the Cessnas and Pipers. It’s a bit like a movie set, nestled in northern Boulder County.

There is some symmetry to Rennicke’s story and the choices pilots make – when to hold back, when to call it a day, when to retread an old path with new wisdom… Because in her youth, cooking wasn’t such a remote dream for Rennicke.

“Funny, I feel like I’ve been cooking my whole life, as a little girl, young adult, then as a parent. And now at the Flight Deck Grill for twelve years. To me, there was no fun in normal,” said Rennicke, who says the motto she lives by is, “When the fun ends, I’m going home.”

Rennicke calls her husband Chad “the Great Oz behind the curtain.” He handles the behind the scene stuff and is the go-to griller for big events. Rennicke says everyone knows their place in the line. The coordinated effort is necessary for a tight space, and twelve years running isn’t a small boast for success.

Outside the grill, though, is where the customers enjoy the eye candy. In addition to the WWII era stylings and decor, every menu item has an aviation themed name. Sandwiches like the Single Engine and the Whirly Bird Burger are popular, and cold treats like the Slurry Bomber Float chaser are perfect for flying standby on hot dry days. The kitsch works.

The Tinker stays busy on the catering side, also. “We love showing up at air shows, HOA picnics, aviation themed weddings (and funerals), office kudo grub events, and holiday parties. Have truck and will travel,” says Rennicke.

She said Longmont has a reputation for its craft scene. “Our people love, love, love eating and drinking local.”

Plans for the Flight Deck Grill’s future include simply remaining a favorite place for diners to eat and watch the runway action. The establishment is open seasonally (May-October) but caters year around. The thrill of watching planes take off is really priceless.

“While we have always dreamed of being a brick and mortar, our aviation ‘Rigstaurant’ is solid and low risk. Today, people find us to be a safe and fun option as we operate as a Take and Tailgate operation. Here’s to the fun never ending,” Rennicke said.

These days, outside dining is key. Why not load up on Jet Fuel and watch ‘em fly?