Off Menu with Eric Lee | Acreage 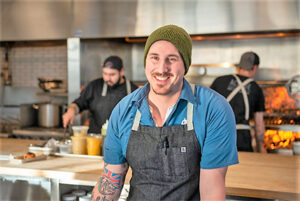 Diners at Acreage are rewarded with a bounty upon their arrival – an authentic farm to plate experience from Chef Eric Lee and an unparalleled view of Boulder Valley to the Rocky Mountain range. Even though he works on the highest bluff in Lafayette, Lee’s got a self professed zen approach to life in the cuisine fast lane.

“As a chef, you have to learn how to pour your heart and soul into a plate, and then let it go. The second it leaves your hands, it doesn’t exist anymore. You can improve, but you have to learn to let it go,” Lee muses as guests settle at tables spaced apart, under a hazy summer sky. There is a half circle of diners sprawled out on blankets, chairs, and on the green grass itself. It’s Instagram ready.

The staff is busy, and the place is bustling. I ask Lee if the fast pace of the food industry gets to him.

Lee says he thrives and creates under pressure, “yet making measured decisions is key to success.” His perspective comes from travel and nomadic living. He was born in Virginia, but spent much of his youth in New Jersey and in Hawaii. As a son of a single mother, Lee also learned how to work the skillet and the stove.

“I don’t really have a home town. I am from everywhere,” Lee says. Indeed, he’s been places.

He took a life changing job at the Old Bell Hotel in Malmesbury, England, referred to often as England’s Oldest Hotel. The inn’s restaurant, abbey, and village markers boast of King Athelstan’s grave and the second largest library of the 11th century.

“It was like this amalgamation of the places England had pillaged. We had 250 bone china plates, which we plated and served on. We used hammered copper pots, probably hundreds of years old. There were elephant foot umbrella stands, and ebony and ivory chess sets, and several real lion rugs,” Lee recalls. Working among the fishmongers, butchers, and farmers opened his eyes to authentic food-to-table type Old Worlde dining.

He eventually landed back in the states, and in Boulder, where he went to work again. At The Kitchen, he met Chef Hugo Matheson, who was born in England. The two bonded over the need for chef-to-farmer relationships in Colorado, as exist in the U.K. Lee was only nineteen years old.

Soon, Chef Kelly Whitaker (on board as a restaurant consultant and developer at what would become Acreage and Stem Ciders) offered Lee the job as head chef at Acreage. A global trekker was asked to stand still for a bit. He said yes.
“Within one week, I created an entirely new menu, shut down for four days. By day three we prepared an entire menu and served it to staff. By day four to friends and family, and by day five we reopened. Day six the busiest day we’ve ever had,” Lee says. He is grateful that the owners let him have control over the menu and produce selection process.

We sip cider (provided by the in house cidery) as the grass buzzes with crickets and cicadas. I note the hilltop garden outside of the seating perimeter. Lee confirms that Acreage has its own fresh produce garden, and its own caretaker. He had just returned from visiting another local producer before the interview. Local is a job here, not a trend.

Family is also an authentic word here. During the initial weeks of the Covid crisis, Lee’s team fed his staff over 200 people per day from food surplus in deep freeze. They still have a “Provisions” pantry to help out staff in need, and those in the community.

It seems Chef Eric Lee has found a home, high on the hill in Lafayette. His motto of ‘living for today’ may be the anecdote for days to come, as we eat well and live for the moment.