AMERICA: Love it or… 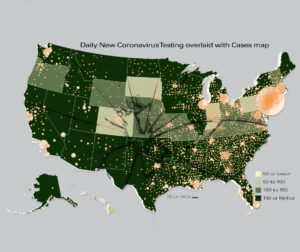 That’s a pretty common refrain Cult 45 likes to fall back to when faced with criticism of the High Priest of their American Freedumb Movement, or any of the litany of social and political ills he’s unleashed on the populace to date. And let’s ignore for a moment that for thinking people, the very soil American patriotism is grown from has been fertilized with the blood of dissenters throughout our history.

We can’t even leave now. Save for a handful of countries, we’re now banned from traveling to more than 30 countries, and the list is growing. But that’s not the worst part. The worst part of this is that where we are now is not happenstance. It’s not even due to Trump’s unflinchingly inept leadership.

This was all by design.

His administration architected this catastrophe, not unlike the infamous “Tuskegee Study of Untreated Syphilis in the Negro Male” where, in 1932, Black farmers in Tuskegee, Ala. infected with syphilis were placed in a study, not told what they had, and instead experimented on and allowed to transmit the disease to family while they were monitored until their eventual death — in many cases after Penicilin was discovered to be an effective cure, which was purposefully withheld from these men.

The difference: The Tuskegee experiment destroyed the lives of a few hundred people.

The story, broken by Vanity Fair (1), reads like a Grisham novel. To summarize: Trump’s son-in-law and White House advisor Jared Kushner was appointed head of a task force to architect a national response to the virus in mid-March. The makeup of the task-force itself is worth admonishment — a cabal of cronyism with little-to-no medical expertise in the room. However, according to Vanity Fair, they did craft a nationwide testing program plan, which multiple experts say is critical to scaling up to support the tidal wave of need.

“Without systematic testing, ‘We might as well put duct tape over our eyes, cotton in our ears, and hide under the bed,’ said Dr. Margaret Bourdeaux, research director for the Harvard Medical School Program in Global Public Policy (2).”

Ultimately, the plan was scrapped. The reason? An anonymous source who worked closely with the task force told Vanity Fair: “The political folks believed that because it was going to be relegated to Democratic states, that they could blame those governors, and that would be an effective political strategy (3).”

Or, put another way: Trump and Kushner decided to sacrifice the lives of 160,000 — and counting — Americans in order to boost Trump’s chances at winning re-election.

The word “unprecedented” has been bandied about with abandon throughout this President’s term. The truth is, we’ve seen most of it before. Pandemics, civil unrest, bumbling leadership and the tragedy of populist cult worship.

But, if true, this decision (which, it should be noted, is predictably denied by the administration), is truly unprecedented. It was a genocidal stroke of unbridled narcissism that deserves to be tried at The Hague.

If true, Donald J. Trump has committed a crime against this nation so egregious that it bears no peer in the 244 years of this country’s history. [Editor’s note: the genocide of Native Americans was planned and systematically impl;emented, killing, by some estimates, 100 million Natives.] There is no analog for the destruction he — and the GOP machinery that has continued to enable him in Congress — has wrought. And worst of all: it shows no signs of abating any time soon.

If you don’t like it, leave, they say. And here we are, facing the horrific truth of this callous proposition: