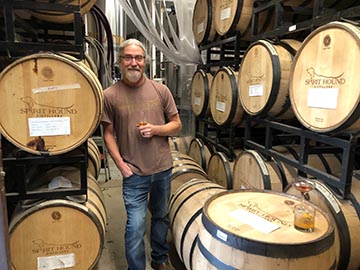 The holidays are coming and that means plenty of drinks are in your future. Some of the tastiest cocktails, ones that help you warm, enjoy a date, and deal with stressful dinner guests, are made with bourbon. And if you’re looking to try a new, locally made bourbon, there’s something available to make your holidays brighter.

At the beginning of this month, Lyons-based Spirit Hound distillers issued a late fall release of their three year handcrafted bourbon that was aged on fully charred American oak barrels. We attended their socially-distanced release day and tasted the offering. There’s plenty to mention.

For starters, it’s an unblended spirit that’s designated as a high rye bourbon because it has 20 percent rye in the grain bill. That translates to a drinkable, complex, bright, and interesting whisky with notes of black cherry, vanilla, and other stone fruit.

Head Distiller Craig Engelhorn gave us some pointers about the best way to enjoy his newest baby. No surprise – he generally recommends it neat and sipped over time. He also said that the cherry notes in the bourbon makes for one of the best Manhattans he’s served from his tasting room.

This is one of a pair of late 2020 whisky releases from Spirit Hound, both of which were conceived at that same time. Engelhorn shared that, “We brewed the rye whisky first and I liked its character so much that I wanted to brew a high-rye content bourbon. I just loved the flavors we were getting out of it.”

He also explained that working with rye grain for both spirits came with a fair amount of challenges. “Our system isn’t designed to handle large amounts of rye – or corn, honestly. Handling mash for bourbon and rye is a giant pain…a long day. The grains’ beta glucans get pretty sticky.”

As it turns out, what wound up in the glass was a huge payoff for all the work. “When we tasted what came out of the still, we were like, Wow. That’s amazing. It’s a pain in the butt, but it’s yummy.”

While the bourbon is available in limited quantities in liquor stores now, It will be followed by the Rye release on December 5th. When we talked, Engelhorn was looking at options for how to make the release as interesting as possible. Keep an eye on their website at spirithounds. com.

*We intentionally spelled Whisky without the e. Want to know more? Ask Spirit Hound. They’ll be happy to tell you.

Benefit Craft Beer Release: Brewers Unite to Help One of their Own 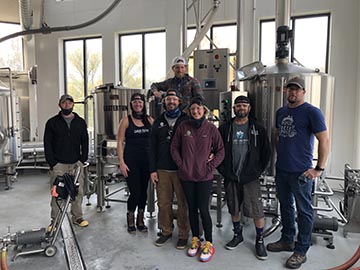 On November 10th Boulder County’s most prominent brewers gathered with craft beer lovers at Left Hand Brewing Company to support one of their own. They tapped a benefit brew that was designed, created, and poured in support of Walter Bourque, head brewer of Grossen Bart Brewing.

Bourque is in the middle of one of the fiercest battles of his life, a fight with testicular cancer. He’s waging it from Texas, where he’s from, but he’s still on the minds of many in Colorado.

Eager to help however they could, brewers did what they did best – they gathered around a brew system to combine water, malt, and hops in a way that they felt would best honor their colleague and friend.

It took the group some extended email-based planning to come up with a recipe they felt their friend would love. What they ultimately made was a relatively high alcohol content, English-style bitter ale that reminded them of one of Bourque’s favorite past Left Hand beers, an imperial version of the brewery’s Sawtooth ale. They’ve named the beer Texan Rampage.

The release was a full-on fundraising party. Even better, not satisfied with the usual brewing and consuming, there was live music and haircut/beard trims for cash donations.

Now that it has been tapped, it’s available for the general public to enjoy. And every purchase supports Bourque’s cancer battle. It will be available in the Left Hand taproom as well as at Wibby Brewing, 300 Suns, Shoes and Brews, and Oskar Brews. Left Hand is also looking to make it available at area liquor stores.