Whither is the GOP? | Duly Noted 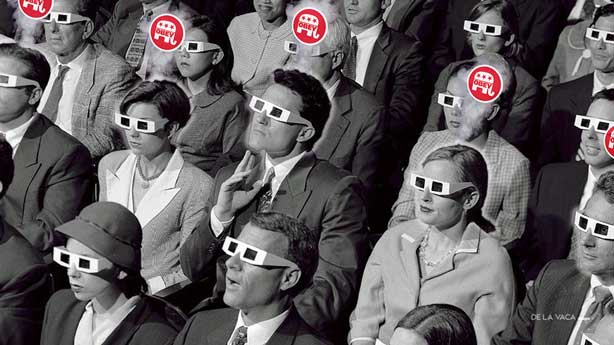 Over the course of the last several years, we’ve watched the party of Lincoln abandon any pretense of honor. The Trump era was a paean to rationalization of means — that no matter what the cost, the goal is all that matters. And to that end, the GOP sacrificed any hint of honor or moral high ground they may have once clung to — arguable as that may have been since the Nixon era.

Today’s GOP is a bust. It has strayed so far from the simple platform of limited government and personal freedom that it no longer bears any resemblance to a party of liberty. Now, it’s a cabal of corrupt ghouls, shaking down an uneducated base with wild conjecture, insane conspiracies and unyielding pride in ignorance. The party’s stars are its worst offenders — acolytes in the Trump cult of personality who continue to push the party ever rightward, past conservatism into an ugly miasma of authoritarianism steeped in jingoism, xenophobia, racism, anti-Semitism and bigotry.

Acolytes like Colorado’s own Lauren Boebert, doing her best to utterly embarrass Colorado’s 3rd District in the House of Representatives on a daily basis. She’s a III%er in a pant suit1, a high-school dropout whose biggest claims to fame include food-poisoning 80 people at a Garfield County fair in 2017 where her restaurant served pork sliders to the unsuspecting attendees (without proper permits)2; multiple arrests and failure to appear warrants for a range of petty offenses3; and tweeting out the location of the Speaker of the House amid an armed insurrection4. To date, she has accomplished nothing in Congress, aside from a steady spate of tweets demonstrating both a complete lack of understanding of either the Constitution of the United States or the basic machinations of government. She’s peddled Q-anonsense multiple times on Twitter and Facebook and tried to carry a gun into the House chambers5.

And then there’s “Jewish Space Laser” celebrity Marjorie Taylor Greene6, who’s spent her first several weeks in Congress making Colorado’s 3rd District look reasonable, compared to Georgia’s 13th. This is the bully who stalked Parkland shooting survivor David Hogg through the streets of Washington D.C. verbally accosting the child for wanting gun control reform7. She embarrassed herself so thoroughly that she was ejected from committee assignments — effectively turning her into a lame duck about 20 minutes after she moved into her office8. Her social media accounts are littered with endorsements of the flat-out stupidest theories spun up over the last several years, including pizzagate, election fraud, 9/11 and false flag theories about the Sandy Hook and Parkland school shootings9.

But what’s worse — these aren’t rando nutbags who snuck into office. This is the face of the new GOP. And for proof, all you had to do was tune into CPAC last month to see it live. From the most horrific rendition of the Star Spangled Banner ever inflicted upon a willing audience10 to the parading of a golden Trump statue — holding a fairy wand and sporting a pair of American flag shorts and flip flops11 — to the stage itself, carefully constructed into the shape of an Odal Rune12.

For the uninitiated, the Odal Rune is a symbol that was first adopted by Nazi SS troops during WWII and has since been chosen by the National Socialist Movement as their logo, replacing the neo-nazi organization’s swastika13. The dog-whistles at this point are just big, bold neon signs.

CPAC’s theme this year — a tempest in a teapot — was “America Uncancelled,” a foot-stamping tantrum aimed at myriad cases of members of the party and their cohorts being held accountable for the things they’ve said and done via social media14. Things like the outrage expressed over former Mandalorian cast member Gina Carano’s brain-dead and tone-deaf Instagram post comparing Republicans today to Jews in the Holocaust15. Or, ya know, former President Trump’s deplatforming from Twitter for his seditious and unyielding attacks on the U.S. Constitution that resulted in an insurrection attempt at the Capitol building on Jan. 6. Of course, the first thing CPAC did — prior to the 4-day event even starting — was “cancel” one of its speakers for unleashing a torrent of horrifically anti-Semitic tweets16.

The CPAC agenda17 included sessions titled, “Why the Left Hates The Bill of Rights… and We Love It,” “Protecting Elections: How judges & Media Refused to Look at the Evidence,” “Same Badge, Different Beat: To Protect and Serve, Or Socialist Social Workers?” “California Socialism: Promising Heaven, Delivering Hell,” “Losing My Religion? Why a Christian Worldview is Foundational to Political Engagement,” a session on Climate Change (with noted climate expert …Kevin Sorbo?), and several other sessions on “Protecting Elections” and the myriad of alleged threats China poses to the United States.

And, of course, it all culminated with a speech by the former POTUS himself. It was a rambling, 90-minute long, lie-filled rant, where the disgraced, twice-impeached former Chief Executive hammered on his election fraud lie, lied about Biden’s plan to cancel the Keystone XL Pipeline, lied about “dead voters,” lied about Biden’s refugee vetting plans, lied about South American deportations, and on, and on. And all of it was music to the ears of the largely maskless crowd in attendance18.

To call it all a circus would be a disservice to the Ringling Brothers. Yet that’s what the GOP has become, a spectacle. A clown show committed to the insane acrobatics of runaway fear-mongering, with a ring-master who refuses to go quietly into the night, even though his own spotlight has been dimmed.