How Popular Is the National Popular Vote?

The United States uses an electoral college voting system to elect presidents. States contribute 538 electors, with a majority of 270 electors determining who wins the presidential election. The number of electors allocated to states is determined by their populations. Winners of the state’s presidential vote represent each state, and the votes for the minority party candidate are not counted, with the exception of Maine and Nebraska. When people vote for a presidential candidate, people are actually voting for a set of electors to represent and vote for the presidential candidate on behalf of the state. The founding fathers created the electoral college as a “safety net,” for politicians to vet candidates against vices such as corruption or cronyism. Of course, at the time of its conception, rich white men would be the intended gatekeepers.

Sylvia Bernstein became an activist and advocate after the 2016 election.

“I first found out about the National Popular Vote after the 2016 election. I, like so many people, got cold water thrown in my face,” the former Co-Chair of Coloradans for National Popular Vote said. “It was amazing to me that somebody that lost the popular vote by nearly three million votes could still become president. I had never been political before. Things had always been just fine. I really found that I needed to get involved.”

For people like Bernstein, the National Popular Vote (NPV) is seen as a more egalitarian way to elect presidents. In the NPV system, each vote would count in the election, regardless of if the voter were in the minority party in their state.

In the current system, “if you are in the minority party, your votes don’t really matter because of the winner-take-all system,” Bernstein said. “It thwarts the will of the people. You’ve got someone elected by the minority who is making policy and representing our country, and that’s just not how a democracy is intended to function.” 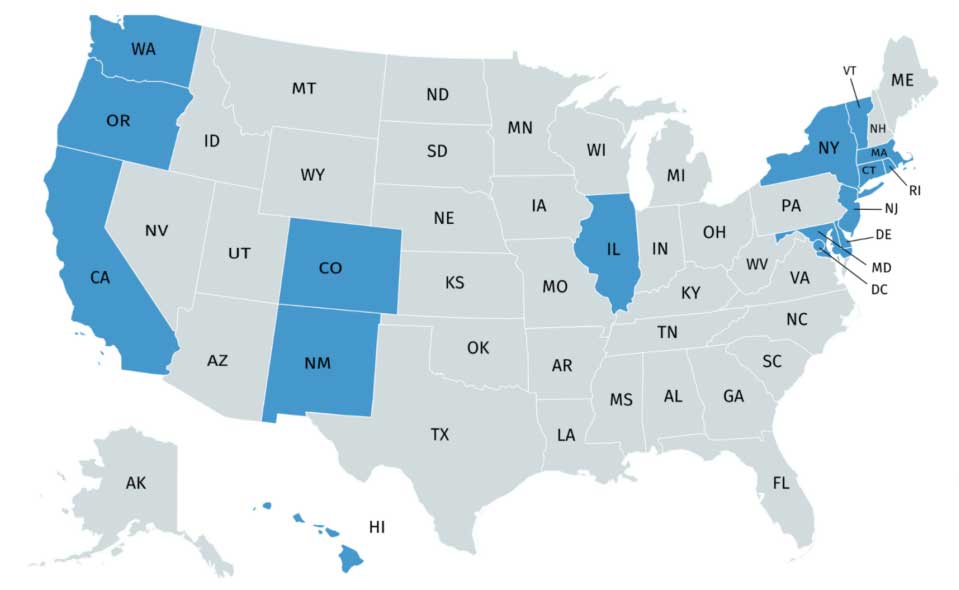 States highlighted in blue have adopted the National Popular Vote.

“It has really affirmed that the popular vote is popular,” Bernstein said about the measure passing in Colorado. “People want the ability to directly elect the president.”

The 2016 election politicized the National Popular Vote, as Trump won through electoral college votes and had significantly less popular votes than his opponent, Hilary Clinton.

“Many get caught up in the politics of Donald Trump to a certain extent,” said Michael Foote, a Colorado Senate sponsor of the NPV bill. “That’s too bad because that’s not how it was designed. It certainly wasn’t a reaction to how Donald Trump got elected. The way that Donald Trump got elected shows some of the weaknesses that we have in the current system, and the weaknesses that the National Popular Vote would be able to reform. Between 2016 and 2020, it seemed like pretty much everything was about Donald Trump, so the National Popular Vote in some people’s minds became about Donald Trump, too.”

Before 2016, the National Popular vote was considered more of a bipartisan issue, with legislation passing in conservative states like Oklahoma and Arizona in support of the popular vote. In fact, only 5 states have joined the National Popular Vote Interstate Compact since Trump’s election; 10 and the District of Columbia had ratified before the 2016 election, according to Ballotpedia.

“Unfortunately, what happened in 2016 with Donald Trump being elected president without winning the popular vote, the electoral college started being viewed as a tool for Republican advantage, which isn’t necessarily true,” Bernstein said. “It hasn’t historically been true. It might be true at the moment, but it’s not necessarily true on an ongoing basis.” 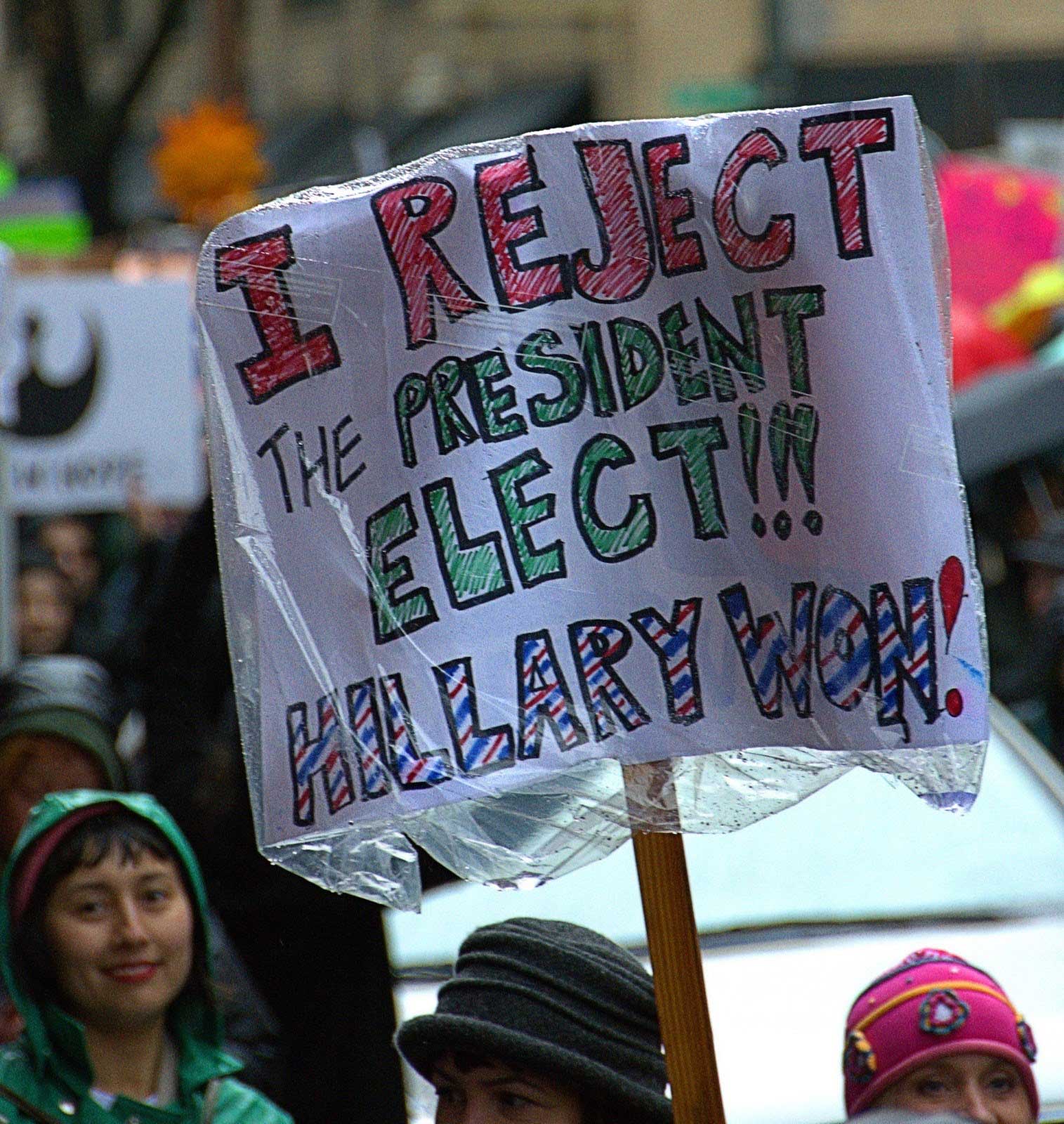 Protesters voice opposition to Trump winning the election in 2016. Photo courtesy of Flickr.

In 2004, George Bush almost lost the presidential election due to electoral college votes, despite having more popular votes.

The NPV will not affect Coloradans, or any American, until more states jump on board. The NPVIC would go into effect if states representing at least 270 electoral college votes – the presidential election threshold – adopt the legislation. Foote said he doesn’t think the popular vote will go into effect in the 2024 election, but wouldn’t be surprised if it’s in effect by 2028.

If enacted, Colorado will see a few positive effects, Bernstein said. Colorado is now considered a safely blue state. With presidential candidates not having to pander to swing states, under NPV, candidates will visit non-swing states more to secure their votes.

Another benefit under NPV is that Colorado may see more policies and federal grants aimed at the state, which are now unevenly allocated to swing states. “It’s no accident that Joe Biden went to Pennsylvania to announce his infrastructure plan,” Foote said. “It’s a swing state, of course he went there.”

The presidential calendar is mostly filled with visits to swing states. Considered a swing state in the 2008 presidential election, Colorado hosted the 2008 democratic convention. President Obama made 16 first-term trips to Colorado. During his 2020 campaign, Trump visited Colorado twice. He visited once for the Air Force Academy Commencement and once to attend a “thank you” event for Cory Gardner for voting to acquit him during his first impeachment trial, according to Foote. 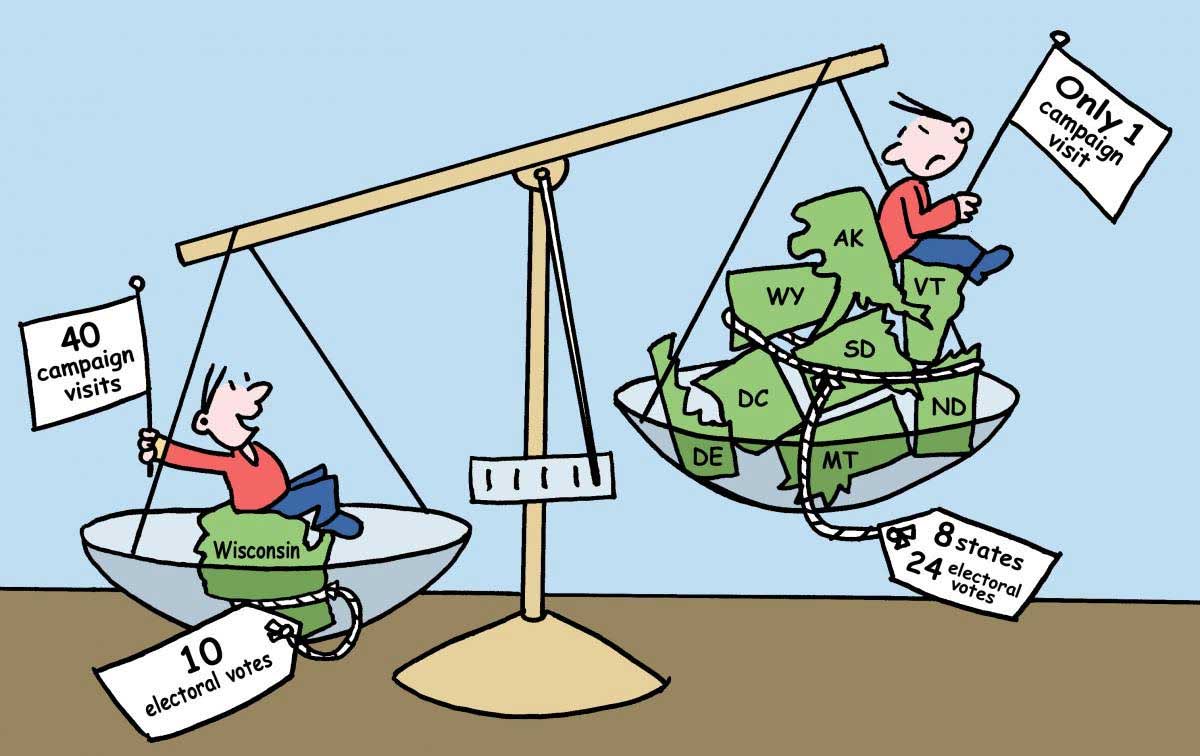 Political cartoon depicting the imbalance of campaign visits between a “swing” state like Wisconsin against eight “safe” states.

“As soon as the national popular vote comes in, a vote in Colorado is just as important as a vote in Florida,” Foote said. “It’s not just about the swing states anymore. You’re going to see campaigns go all across the country as opposed to just a dozen states.”

“The Boulder County Democratic Party is proud that Colorado has joined the National Popular Vote compact, and hope that other states will soon follow suit,” said Boulder County Democrats Chair Raffi Mercuri. “We believe that while the electoral college remains a part of the Constitution, this method of electing the President and Vice President of the United States disenfranchises millions of American voters and creates a dynamic in which presidential candidates must tailor their campaigns to a handful of swing states, rather than appealing to the majority. We believe that the National Popular Vote Compact is a constitutional and equitable way to give decision-making power to a larger number of voters and avoid the ever-contentious scenario where one candidate wins the presidency electorally without actually winning the largest number of votes.”

Bernstein also heard from Coloradans who oppose the National Popular Vote. Most commonly they fear rural areas losing representation to big liberal areas, such as California or New York. This fear is either out of ignorance of the way votes are weighted under the current system or they mean over-representation, which, under the current system, is the de facto outcome.

Jacob Johnson grew up in a rural town of less than 5,000 people.

“Personally, I feel like the electoral college needs to stay in place because then the capitals and the big populated areas across the country have the say on what gets passed,” Johnson said. “People in the country are farther outside those areas. Their opinion won’t matter. When you look at Denver, three fourths of the population is in these areas. The people in the country, their vote doesn’t have a standard anymore.”

Johnson worries that if the National Popular Vote is used, big populations in cities will wash out the voices of people living in smaller communities. “How I grew up is a complete 180 compared to growing up in a big city,” Johnson said. “In the country you’re creating your own ideas about things. The electoral college helps spread out the weight of where everything is coming from. It balances out both sides.” In fact, if each person in America had one vote, that was perfectly weighted to all other votes, every voice would count equally. Currently, that’s not the case. 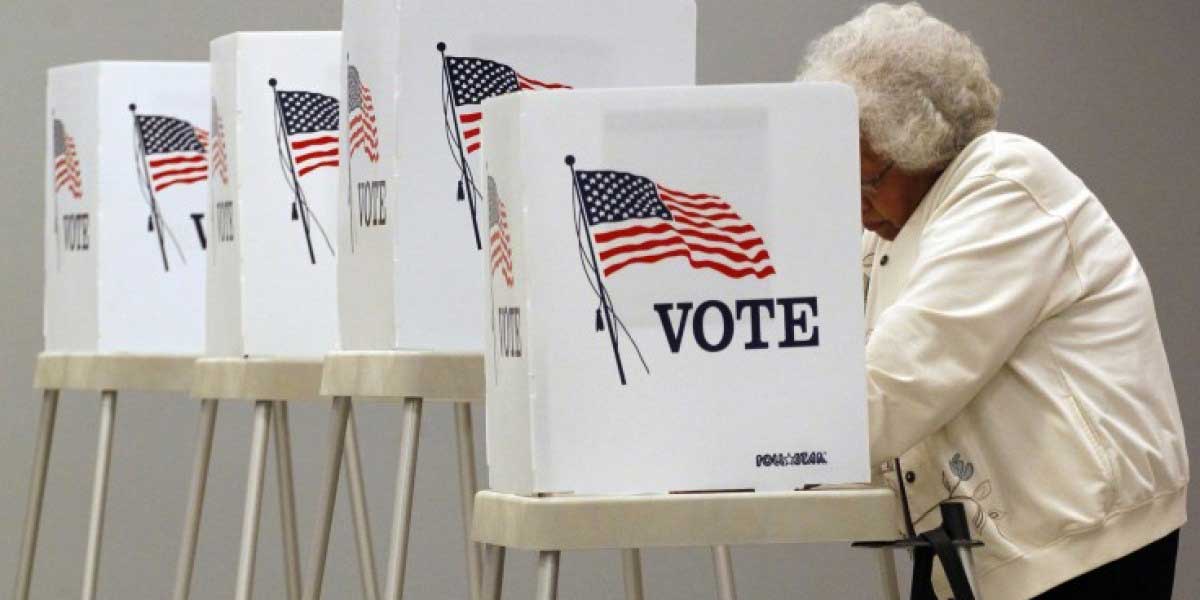 Bernstein and Foote agree that rural Coloradans need to have a voice too. They see the national popular vote as doing just that.

“For someone who lives in the rural part of Colorado, or any part of Colorado, if they end up voting for the candidate that doesn’t get the majority of votes in the state, their vote gets tossed aside,” Foote said. “Their vote doesn’t matter. It doesn’t get counted toward the grand total. If someone lives in rural Colorado, and they voted for Donald Trump last election, or Donald Trump in 2016, or Mitt Romney in 2012, or John McCain in 2008, their votes mean nothing because none of those candidates got the most votes in the state of Colorado.”

With that same logic, the popular vote will “unleash” democratic votes in Texas.

“It all comes out in the wash,” Bernstein said. “We should be voting as Americans, not as a Californian, a Texan, or New Yorker. The notion that there’s going to be a domination by one state or another is completely missing the point that we will no longer be voting as states. Small states are ignored now. The only states that get any attention are the swing states. It doesn’t matter if they’re big or small. California is just as ignored as North Dakota. Once the National Popular vote comes into play, all states are going to get attention and representation and every vote is going to count equally, no matter what state you’re in. We will be voting as Americans.”

Bernstein believes that the electoral college discourages young voters because they believe their vote might not count.