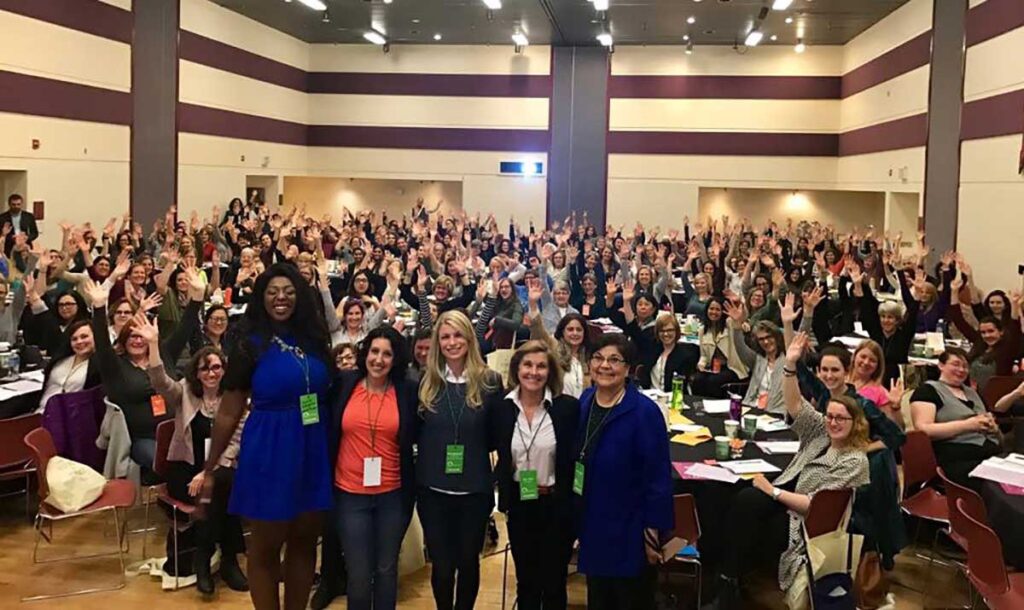 You’re a candidate running for local office. You’re going door to door in your neighborhood talking to voters about the issues that matter to you both. After a congenial conversation with an older gentleman, he leans in for a hug. Not wanting to duck the interaction or seem cold or aloof, you acquiesce. After all, it’s just a hug. Instead, he grips your flesh tightly, caressing your buttocks, reaching around to squeeze your breasts. You’re shocked and pull away.

The above actually happened to a female candidate in Arapahoe County in September 2022. That’s right, this year.

What made this “neighbor” feel entitled to sexually assault her? There’s not enough space in all the publications in the world to answer this question.

This interaction, albeit a shocking one, is an example of undesired attention female candidates may face. Beyond egregious  situations like this one, there are closely held beliefs and situational realities about women running for political office.

So, in this election guide feature of Yellow Scene, we wanted to explore which organizations are poised to help Colorado women who run for office, why they’re necessary to bridge the dreadfully named “ambition gap,” and why women still hesitate to throw their hat in the ring, even in Colorado, a state that is 2nd in the country in terms of female representation in state government.

Emerge America, a 527 political organization, was created in 2002. Emerge Colorado is our state’s Emerge America affiliate. Emerge exists to prepare Democratic female and female-identifying candidates to run for political office. It offers training and support from former and current office holders, political strategists and partners with groups like Cobalt Advocates, Planned Parenthood of the Rocky Mountains, and local labor unions.

Emerge’s Signature Program, which runs January to June is 100 hours of in-depth candidate training every weekend so participants are fully ready to run upon graduation.

Candidates in active political campaigns can attend a weekend-long intensive Boot Camp Training. Prior to this August, the Boot Camp was held in metro Denver. But in an effort to be truly statewide and cognizant of the associated travel expenses, Emerge Colorado held the weekend intensive in Pueblo, Colorado.

Emerge’s executive director, Dr. Lisa Calderón, has made a commitment to ensure Democratic womxn outside of the metro Denver also have the option of in-person training while also offering the option to participate virtually. Speaking of Pueblo, Emerge recently hired Sol Sandoval, Pueblo native and former U.S. congressional candidate for District 3 as their new American majority rural program manager.

Emerge class sizes range between 20-25, determined by an application and interview process. For womxn still contemplating a run for office, there’s an online, hour-long Step Forwards training program to help answer, “Should I run for office?” and “What does it take to run a successful campaign?”

We spoke with former participants about their experience with Emerge. Brianna Titone, state house representative for District 27, is a 2018 Emerge graduate who is running for a third term. She told us, “For anyone who is contemplating a run, I’d encourage them to reach out to people who have been through Emerge. Running for office can be extremely intimidating, and there are so many unknowns. I really had no idea about running for office or what I was getting myself into. Having done the program, I now have a whole network of other Emerge graduates, and we can turn to each other for help.”

We also spoke with Erin Kenworthy, a 2020 Emerge alumnus, the director of religious exploration at First Unitarian Society of Denver and married mother of two. She told us, “I’ve heard folks say that Emerge gives its grads a formula for running a winning campaign. And while the information, supportive network, and access to tailored resources are absolutely valuable, each Emerge candidate is empowered to do their own research and run their own campaign.  Campaigning and serving as an elected official require different skills, but both require work, dedication, and a willingness to invest yourself fully in the process. I think Emerge gives a boost to women and non-binary folks who are already hard-working, community-invested, service-minded, qualified leaders.”

When it comes to female office holders, how does Colorado stack up compared to other states?

It’s a mixed bag. Colorado ranks high when compared to other states if you only look at the state capitol. But when you factor in female representation in our cities, counties, and Congress, grab your umbrella because it’s raining men.

First, the good news. Colorado is ranked #2 in the nation based on the number of women in the state legislature. Currently, 45 of the 100 total seats are held by women with a 38/7 Democratic/Republican split. Twelve women serve in the State Senate (11/1 Democratic/Republican), and 33 women serve in the State House with (27/6 split) Nevada ranking #1 with female members making up 58.7% of seats held (37 of 63 total seats).

Note: Ganahl and Smith are at-large members whereas the other seven regents are elected from each congressional district.

Before any celebratory champagne is poured, remember Colorado is one of 19 states that has never elected a female governor or U.S. senator.

Notably, Denver has never had a female mayor. But a recent Emerge and Colorado Working Parties survey of 400 registered voters in Denver showed that it’s about damn time. Fifty-two percent responded they are motivated to vote for a female mayor and 25% are very motivated.

In 2021, the most recent year for which there are statistics, six women held mayoral offices in Colorado (Englewood, Centennial, Lafayette, Loveland, Northglenn, and Thornton). In that same year, the Center for American Women in Politics revealed female mayors in 25.1% of cities with populations greater than 30K. Since Colorado has 33 towns with populations of 30K or more, those six female mayors make up 18% of the total.

Why are groups like Emerge needed in the first place?

Research has shown women in government tend to work in more collaborative and bipartisan ways and employ a more democratic leadership style versus a more domineering style from men.

Women are also more effective at building coalitions and reaching consensus. Research related to bipartisanship was derived from looking at female representatives in the minority party being more successful at keeping their sponsored bills alive through later stages of the legislative process than are minority party men, across the 93rd–110th Congresses (1973–2008).

Female heads of state in Denmark, Ethiopia, Finland, Germany, Iceland, New Zealand, and Slovakia have been internationally recognized for their responses to the COVID-19 pandemic. All were proactive in responding to the threat of the virus, implementing social distancing restrictions early, seeking expert advice, and unifying their respective countries around a comprehensive response with open and honest communication.

Of course, there’s the laundry list of issues like paid family leave, childcare costs, reproductive health, equal pay for equal work, and sexual assault, born most heavily by those of the female persuasion whose voices are not heard within our legislatures which skew toward older, white, and male. Since white males make up 31% of the U.S. population but 65% of officeholders in the U.S., it’s anything but representative.

But What Do Womxn Think About Running?

Every 10 years, the Brookings Institute conducts an in-depth Citizen Political Ambition Study surveying 4,000 “potential candidates” with professional backgrounds common among elected officials including lawyers, businesspeople, educators, and political activists. Even controlling for factors like political affiliation, age, race, geographic area, and parental and marital status, with a sample of equally matched women and men, women were dramatically less likely than men to have thought about running for office.

The survey was first conducted in 2001, again in 2011, and most recently in 2021. Surprisingly, or not depending on your viewpoint, the gap between men and women widened in the most recent study with 60% of men considering a run for political office while 60% of women had never entertained the idea.

External and Internal Triggers About Running in the First Place

Beyond being self-motivated, men are two-thirds more likely than women to have been encouraged to run by an elected official, party leader, or political activist. Closer to home, men are 40% more likely to receive the suggestion to run from a colleague, spouse, or family member.

The big rub? When they actually are old enough to run, women need — but don’t get — the same encouragement. Add to this that, if they do get encouragement, it’s from dramatically fewer sources than earlier in life.

One powerful source of recruitment are party chairs. Scott Merrifield, Jefferson County’s Democratic party chair, shares what he looks for in a potential candidate: “It’s a vague concept, but for me it’s charisma. Is this someone who likes to talk to people, and who people like to talk to? Are they a clear communicator? Are they passionate about the ‘right’ things? Are they driven? Are they willing to listen and learn? No one is an expert on everything they’ll need to know and want to do while in office. But they need to be willing to listen to people who know more about policy and procedure.” 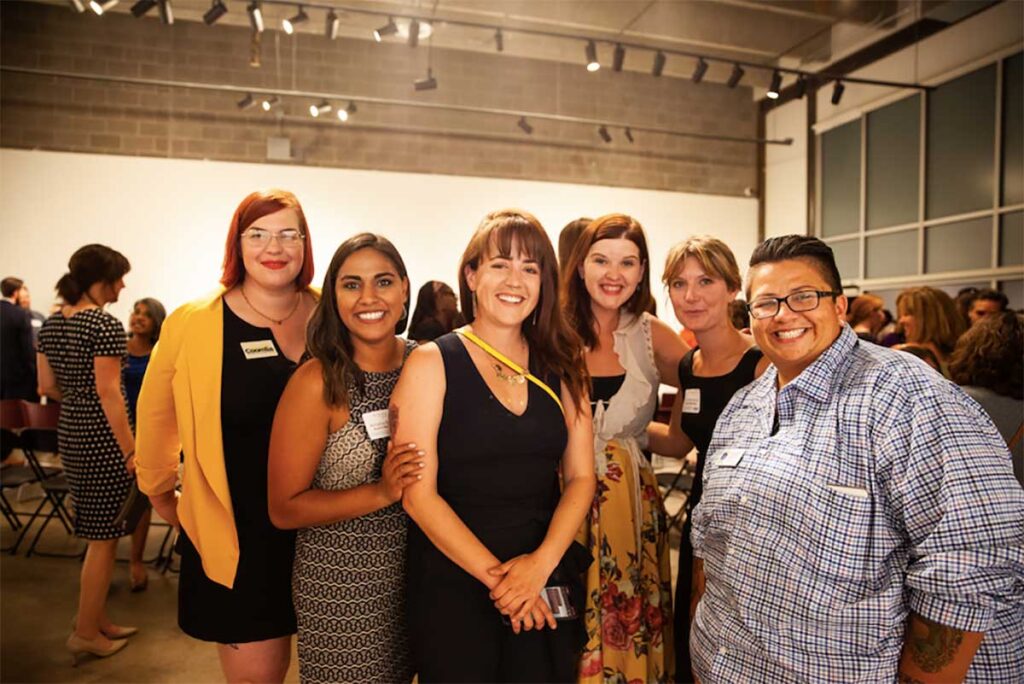 Believing in Yourself Is Half the Battle

Looking at gender differences internally, 2,100 college students were surveyed, and results showed a huge chasm between men and women believing they’d be ready and able to run in the future.

Only 49% of women believed they would be ready as opposed to 69% of men.

Other Factors Stopping Women from Running for Office

The Brookings Institute’s Citizen Political Ambition Panel Study found that women are less likely than men to be willing to endure the rigors of a political campaign. “Rigors,” which is undefined, is just another word for unnecessary bullshit where campaigns can devolve into “opposition research” or “digging up dirt.”

However, one of the study’s reasons we can wrap our heads around is that women are less able to reconcile work and family obligations with a political career. Who wouldn’t want to hold a job, manage an entire household, throw some childrearing in the mix, AND run for office? What a sad commentary on gender roles in 2022.

Another reason given is that women are less likely than men to “perceive a fair political environment.” It’s unclear how the Brookings Institute defines “fair,” so we’ll assume women opt out of all things potentially unfair.

One of the more interesting reasons given for the lack of female participation in politics, from American University’s School of Public Affairs, is that sports prepare young men for the win-or-lose nature of a campaign.

This is absolutely ridiculous. The “win-or-lose nature” is a poor attempt at a legitimate reason to link elected office to competitive sports. The only way in which they are alike is that both are hostile to women.

After all, one of the worst insults, beginning in childhood and continuing into adulthood is when men degrade each other by saying, “He runs/throws like a girl/bitch/pussy.

Another reason for women opting not to run, barely mentioned in the studies, is the unwillingness to devote time to campaigning and serving when the majority of elected positions are unpaid or paid a paltry salary. Just as it’s easier for an upper-middle class college student to opt for a prestigious internship because they’re not relying on being paid, trading time without being adequately compensated is not a bargain many women are willing to make.

In Colorado, the average salary for a state legislator is 40-41K.

Given all of these reasons, structural realities and self-talk — there is no one culprit to explain why women don’t run for office in the same numbers as men.

At the most recent Emerge Trailblazers event, Board Member Summer Nettles said, “Running for office isn’t a privilege, it’s your right.”

Author Susan Gale once wrote, “All good things are worth waiting for and worth fighting for.”

The wait is over. Let the fight begin.