The Injustice of Real Estate: History, Hope, and Solutions for a More Equitable Future

Homeownership is one of the strongest tools for generating wealth in America. Home values tend to appreciate over time, loans and mortgages make it easier to make such a large purchase, and equity grows as mortgage payments are made. However, though the homeownership rate in the U.S. sits at 65.8 percent in the fourth quarter of 2020, the racial gap in homeownership is alarming, and has been so historically. There are changes happening, and programs available, to reverse this trend.

The U.S. has marginalized most non-white groups in its 400-year history and the institutionalized groundwork that prevented minority groups and the BIPOC (Black, Indigenous, and People of Color) community from generating wealth in America continues to still play a very real and active role today. It is as vital to understand the historical events that led up to our current situation as it is to understand the available opportunities that exist today, and what needs to be done to create viable change for the BIPOC community. 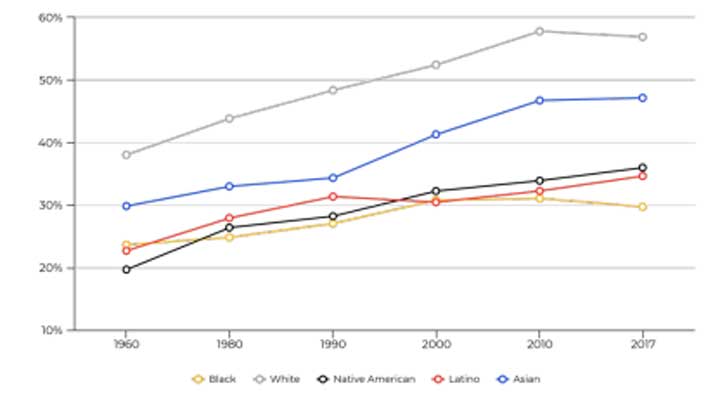 Homeownership rates have improved since the 1960’s for all races but the gaps between BIPOC groups and White people have all increased, signifying an increase in racial wealth gaps.

According to the Bell Policy report, poverty and unemployment rates are large factors playing a role in homeownership, especially in regards to credit creation, which is a key factor in acquiring loans. Parsons states that, “[r]esearch from the Consumer Financial Protection Bureau (CFPB) in 2015 shows a strong correlation between income level and both ‘credit invisibility’ and ‘unscorability’ – that is, a lack of credit record altogether, or having an insufficient credit history to generate a credit score.” Parsons continues that the “CFPB also finds ‘credit invisibility’ and ‘unscorability’ are strongly correlated to race.” 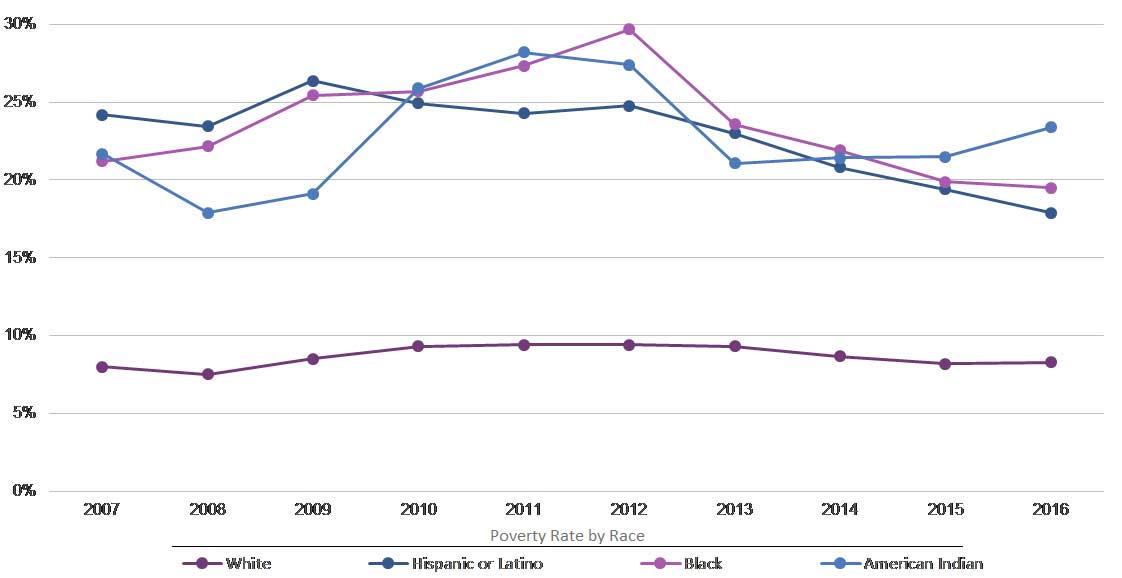 Even when using federal or state programs for loans or down payment assistance, good credit scores are incredibly important. In an interview with local Realtor and (Woman of Color) Ella Marie Taylor of the Wall Street West Group explains that “[b]ad credit is one of the main obstacles keeping POC away from homeownership.” Taylor continues that, “there will always be minimum credit requirements in order to qualify for a loan.” Taylor says that even programs designed to assist require a score of at least 620, and one program through the Department of Housing and Urban Development (HUD) requires a score of 580 but it can go as low as 500 with a larger down payment. 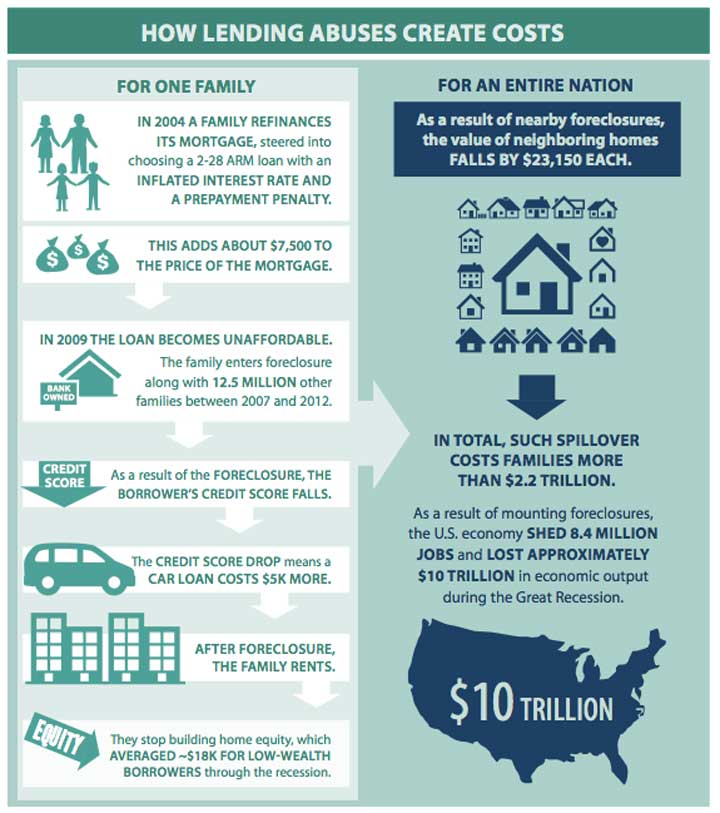 As to what’s causing these continued trends today, Parsons blames discrimination in lending, predatory lending, and the subprime crisis and Great Recession. Parsons points to, “2009 data from the policy think tank, The Greenlining Institute, show[ing that] Latinos and Blacks were disproportionately steered into the subprime lending market leading up to the housing crash.” Non-white groups are also more likely “to have high-cost mortgages.” Parsons explains that the National Bureau of Economic Research (NBER) says this is due to a combination of high-risk lenders and “differential treatment by those lenders.” Parsons further explained that The Greenlining Institute found “even among borrowers with the highest credit scores, 13.5 percent of Latino and 12.8 percent of black borrowers received high-cost loans, compared to 2.6 percent of white borrowers.” 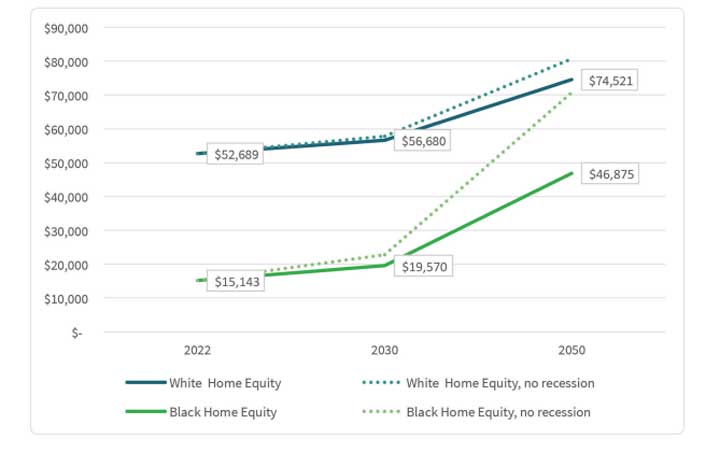 The effect of the great recession on home equity for the next generation of whites and blacks (aged 30-40). Source: ACLU

In a report by the ACLU titled, “Impact of the US Housing Crisis on Racial Wealth Gap Across Generations,” they found that “without the Great Recession, Black and White home equity values for this group [next generation] were headed toward parity by 2050.” But because of the Great Recession, the ACLU found that the gap in home equity for the next generation of White and Black Americans, will remain large far into the future.

The United States has committed undeniable atrocities against its own population, starting way before it’s founding and continuing today. Some of those atrocities were institutionalized and lingered, but all of them combined have led to the discrepancies that exist today between groups. Slavery, indentured servitude, lynching, internment camps, the deportation of 3 million Latinos from 1930 to 1954, Jim Crow laws, redlining, the murder and forced assimilation of Native populations (and theft of native lands/violation of treaties), and so many other examples, stain the very fabric of our nation with the blood of our own and other countries people. Parson explains, that “[t]he history of racial discriminatory policies shows today’s racial wealth gap didn’t originate naturally – it was purposeful.”

Redlining was the racist methodology that marginalized BIPOC and foreign communities and came about after the New Deal, which was said to have revolutionized the ability to acquire loans for homeownership. The Home Owners’ Loan Corporation (HOLC) created “Residential Security” maps, color-coding American cities in four different categories including the lowest, “Hazardous” zone which were subsequently redlined by lending institutions impacting the decades to follow. According to the study, “HOLC “Redlining” Maps: the persistent structure of segregation and economic inequality” conducted by the National Community Reinvestment Coalition (NCRC), 74 percent of the neighborhoods that were marked hazardous “eight decades ago are low-to-moderate income (LMI) today.” 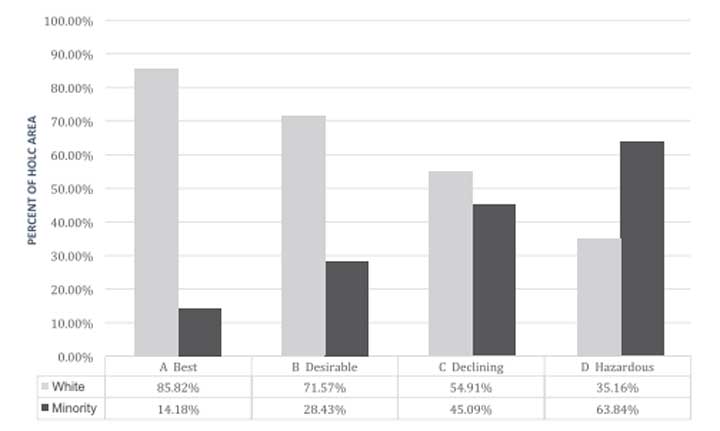 National HOLC Grades and Race: Percentage of areas with HOLC grades that are currently majority non-Hispanic white, or majority-minority nationally

The University of Richmond offers an interactive guide for all U.S. cities mapped by the HOLC including original descriptions of each area when available. In the description of Denver section ‘D13’, which today would be near Five Points, it was referred to as “one of the best colored districts in the United States,” and “[w]ere it not for the heavy colored population much of it could be rated ‘C’.” The section was rated D and like all other ‘hazardous’ zones redlined. This is just one example of how the HOLC codified racism across the nation, something that continues to influence the development of those redlined areas to this day. 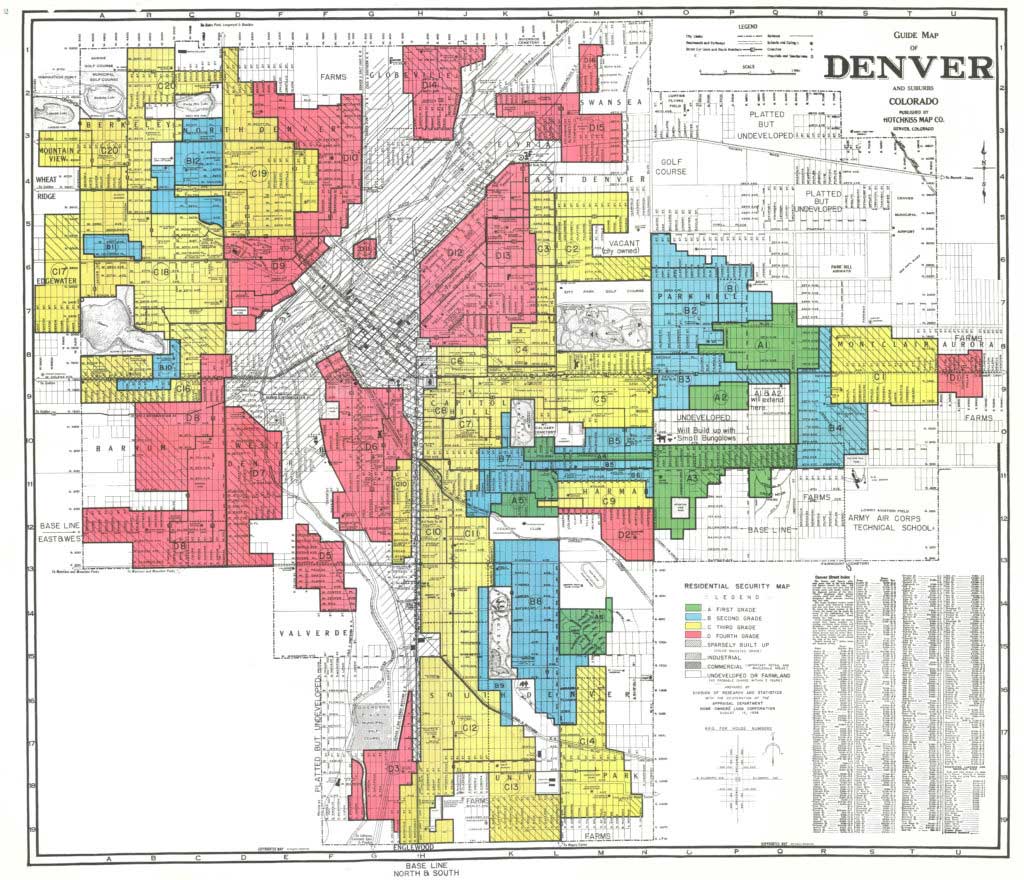 Redlined map of Denver by the HOLC.

Redlining was made illegal with the enactment of the 1968 Fair Housing Act and predatory lending has largely taken its place. Vestiges of redlining remain. 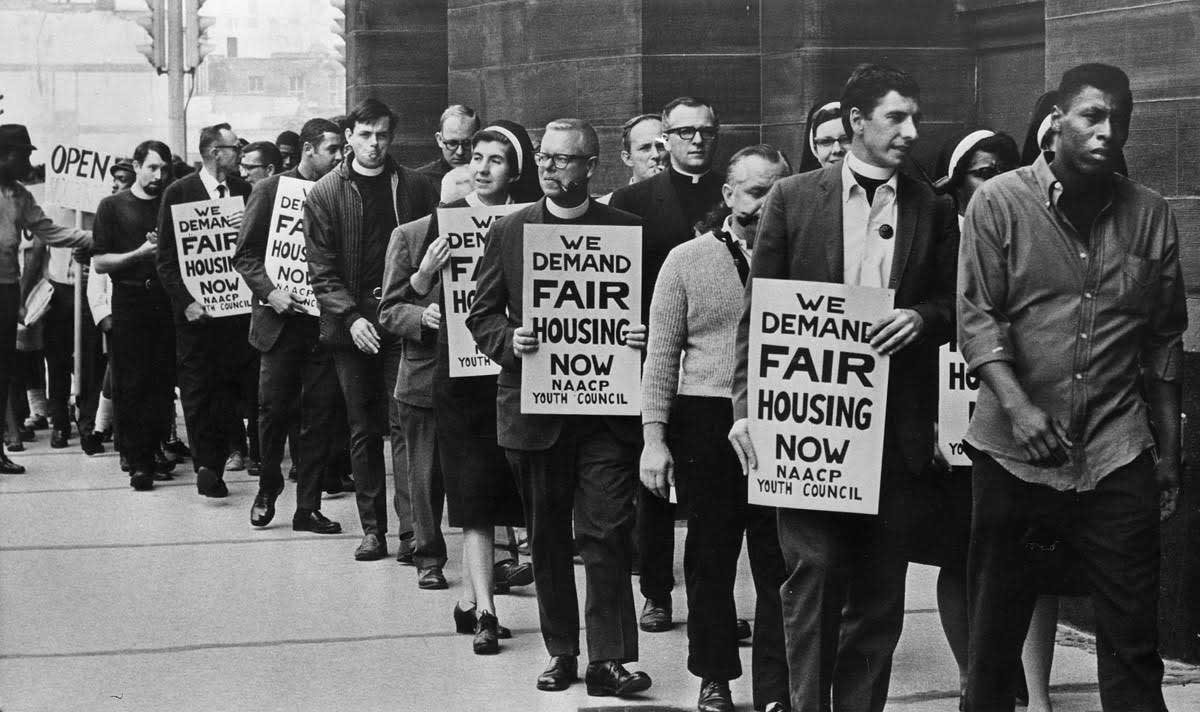 What Can Be Done

Boulder County Realtor (and person of color) Amirah Counts of West + Main Homes says, it’s a tough time to be a home buyer. “It’s a sellers market,” Counts tells YS. “Some properties have gone over contract for over $100,000 of the asking price.” When asked what’s one of the biggest hurdles first time homeowners face, Counts points to education. “It’s not just you’re paying a mortgage, you’re also paying upkeep.” First time buyers need to be aware of “not only the process of becoming a homeowner, but what it’s like to be a homeowner.” She explains that, “it starts with the financial portion and I think that should be taught in schools.” In Colorado, Operation Hope is providing financial literacy empowerment and economic education and the CHFA has a free Homebuyer Education program.

Federally, The Bell Policy report lists several ideas and bills that are being worked on as partial solutions. Baby Bonds, first studied by William Darity Jr. and Darrick Hamilton and then popularized by Senator Cory Booker during his Presidential Campaign, are one such answer and would provide each child $1,000 at birth that could grow to $40,000 by age 18. Such a seed fund would be used for wealth generation and asset acquisition later in life by the benefactor. Another approach is [former] Senator Kamala Harris’s LIFT the Middle Class Act to provide “refundable tax credit for most middle- and working-class Americans.” Other solutions include down payment and renter’s assistance and progressive tax reform.

Locally, programs are currently working to assist Coloradans when it comes to purchasing a home. Notable programs include Habitat for Humanity, the Affordable Homes program at Central Park, and NeighborhoodLIFT which provides down payment assistance to qualified first time homebuyers. See below for more programs.

Realtor Ella Taylor also shared that community members can use the Department of Housing and Urban Development (HUD) which “[t]hrough the FHA (Federal Housing Administration), helps home buyers who don’t qualify for conventional loans obtain affordable mortgages.” Taylor explains that “[t]he FHA’s mortgage insurance program offers low-income home buyers, or those with bad credit, the ability to qualify for FHA loans, which are secured by the government.” Taylor also became certified as a credit repair specialist, which they offer their clients free of charge. 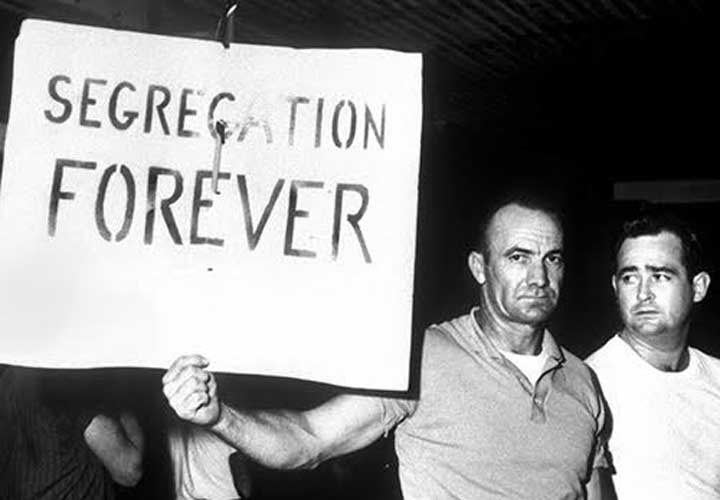 Data from the Census Bureau shows that homeownership for White people in America sits at 74.5%, or roughly 9% higher than the national average.

Homeownership is vital for wealth generation and allows individuals to add security to their own future and to that of the next generation. As Taylor puts it, “[a]s you build equity in your home over the years, you can borrow against that wealth. Homeownership is far and away the most powerful driver of wealth creation in the U.S. economy and one that must be made accessible to more POC if we hope to increase their financial security.”

The historical timeline of racism in the U.S., leading up to today, has systematically worked to prevent the BIPOC community from acquiring wealth and homes as easily as White people. It will take the effort of all Americans – specifically including political will – to change and work towards a future where all Americans have the same opportunities that White people are privileged with; this will not help BIPOC recover the wealth that has been systematically denied them, but it will allow for a more equitable future. It requires addressing a multitude of factors that certain communities and the BIPOC community face that perpetuate a cycle of poverty and the stunting of growth and development. For now, local, state, and federal programs and organizations are working to make it a little easier, with hopes that one day the playing field will truly be level.