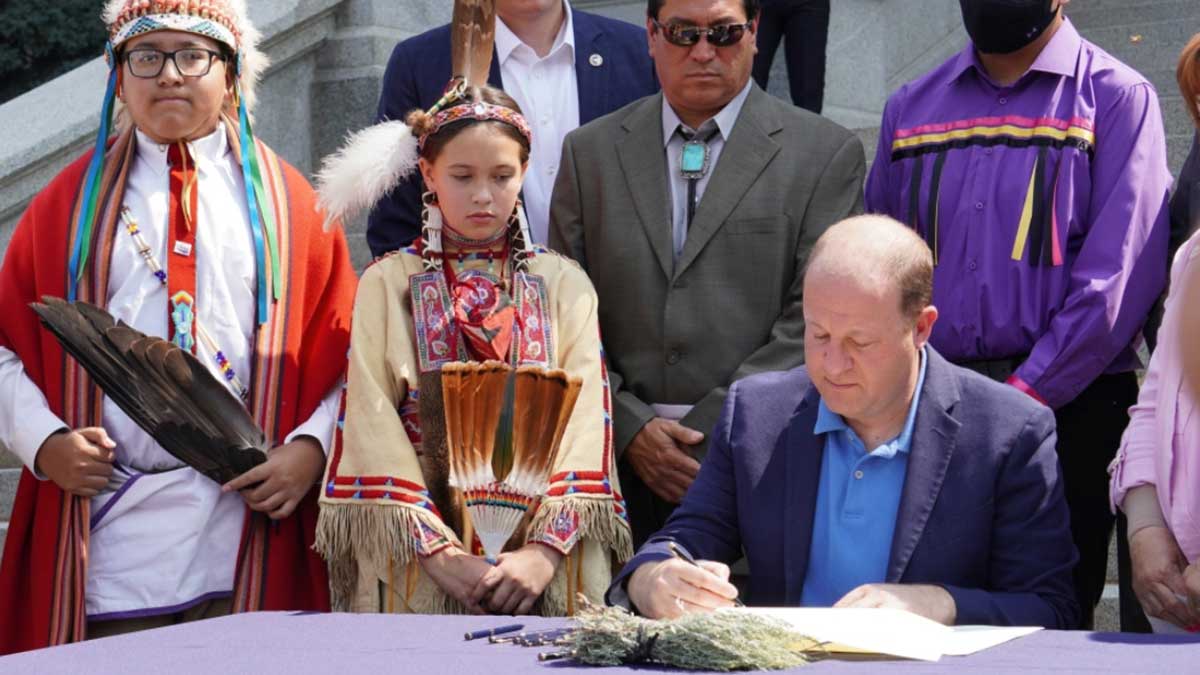 Gov. Polis rescinded an 1864 Executive Order which legalized murder of Natives. Photo by the Colorado Sun.

• On August 21, 2021, Governor Jared Polis rescinded an executive order signed in 1864 by Governor John Evans, which codified the legality of extrajudicial murder of Native Americans. That is 157 years of legalized murder of Natives in Colorado.

• A well regarded and long-serving CU Boulder Professor of color was fired and is contesting the validity/legality of the dismissal. It’s a complicated story and we will be reporting on it more in full in the coming weeks.

• A Denver entrepreneur has proposed a test universal basic income project for the area’s homeless, citing studies on similar projects in Stockton, CA, and Chelsea, MA. DP reports, The Denver Basic Income Project, if fully funded as envisioned by clothing company owner Mark Donovan, would give money to three groups of people only experiencing homelessness with no rules on how it can be spent. No city money would be used and Mayor Hancock is in favor of it.

•  Get on the bike committee to build a better Boulder. Boulder County is seeking residents who meet specific criteria to be part of a 10-person committee that will guide planning for the new CO 119 commuter bikeway. The path is one element of a roughly $253.3 million project to upgrade the highway. The application deadline is Sept. 7. Click here for more information.

• With the number of Delta variant cases surging throughout Boulder County and the nation, public health officials on Friday updated their guidance to recommend everyone 2 years and older wear masks indoors regardless of coronavirus vaccination status. The Colorado Department of Public Health & Environment first detected the Delta variant in Colorado in April. On July 18, CDPHE variant tracking indicated that the Delta variant is responsible for more than 95% of new COVID-19 cases in Colorado.

“We are gathered here on a very somber, but also in some ways, celebratory day, that we are addressing a wrong of the past… This is an ongoing process, to make amends with the sins of the past.”
– Governor Polis, rescinding Second Territorial Gov. Evans’ Indian killing order

“I think the interest is increasing the ways that the public can participate outside of the live proceedings. If someone wasn’t able to attend a hearing… because they had… conflicts, People Speak would allow them to listen to the presentation and provide their comments with all of the same kind of information that they would get at the live meeting without having to attend.”
– Kim Sanchez, deputy director for Boulder County Community Planning & Permitting

“Cases of COVID-19 are surging in Boulder County due to the Delta variant. We are continuing to follow a variety of metrics, including the CDC’s guidance, data and recommendations that will help us protect the health of all people, keep our businesses open, and preserve our hospital and health care resources.”
– Camille Rodriguez, Boulder County Public Health executive director

“Know this. We will not forgive. We will not forget. We will hunt you down and make you pay.”
– President Biden, in response to the death of 13 service members in a bomb explosion at Kabul Airport during evacuations

percent of vaccine-eligible residents who have received one dose of the two-shot Pfizer or Moderna vaccines v. both doses.

total new hospitalizations and deaths over the last week at the time of publication.