It’s Summer: Get Your Honey (Education) On | Foodie

It’s a sweetener but certain kinds can also be used as an antiseptic. It has been harvested and used in food for thousands of years and one of its earliest edible applications is rumored to be the first creation of alcohol. It’s been used to pay taxes as an offering to the gods, and as ancient Egyptian embalming fluid.

What are we talking about? Honey. And as summer and as honeybee production is at its peak, it’s time to learn more about this golden sweetener. 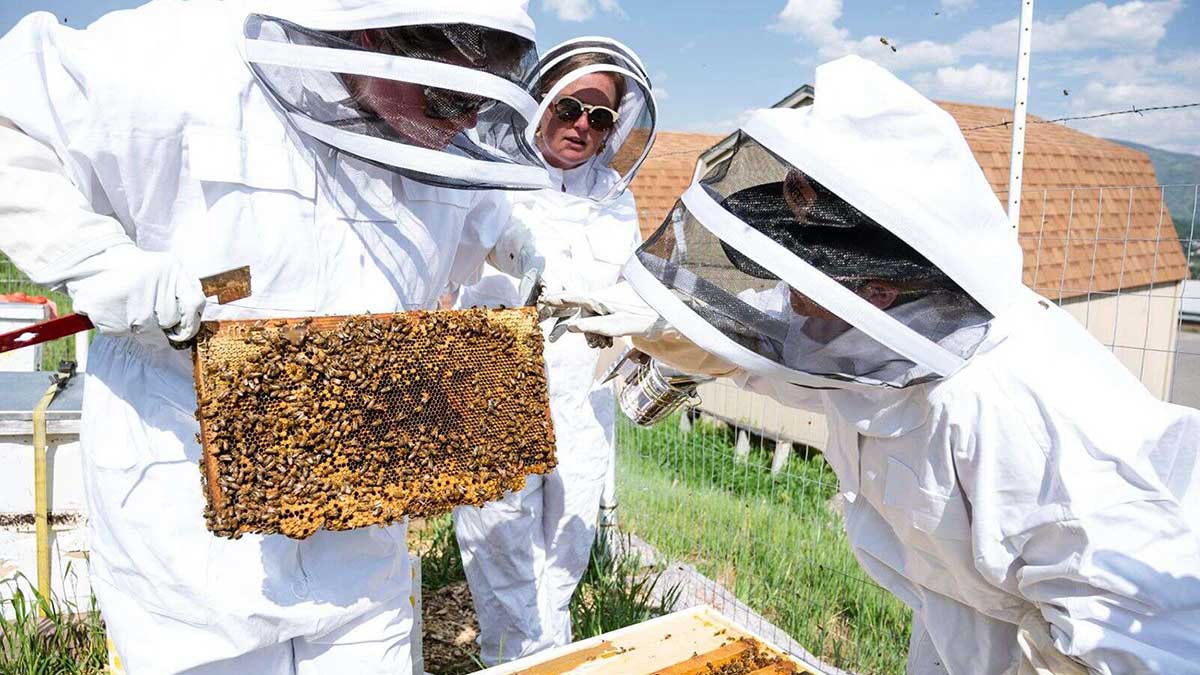 According to the Colorado Department of Agriculture, there are more than 19 commercial beekeepers with 38,000 hives in our state. Those with less than 150 hives are considered hobby beekeepers. As recently as five or six years ago, more than a million pounds of honey were produced in the state, with an estimated value of more than $2 million. That number has almost certainly declined with threats from land use, pesticide use and other environmental impacts.

Colorado isn’t a top producer of honey nationwide, but many neighboring states are. The largest producers in 2020 were North and South Dakota with 38.6 million and 14.9 million pounds produced respectively. California, Texas, and Montana are also in the top five.

A Not So Sweet Fake Out

Do you think, like many do, that honey in a packet is the same thing that you’d get from a local farmer’s market? Think again.

As with anything else, there’s good honey and then there are fakes. Honey is being diluted with cheaper syrups and, in many cases, its pollen is being reduced too. It’s a trend that reflects a growing market demand for honey in a time when actual honey production is being pressured by declines in honey bee populations.

It’s possible to taste the difference. True honey is nuanced with a flavor range that varies  from brand to brand. It’s slightly spicy, or it’s floral, or it has a soft and even sweetness. The one-note flavor of filler-focused honey is boring by comparison.

To be sure that the honey you’re enjoying is authentic, build a relationship with a local purveyor. There are plenty of them in the region, and you can find them at farmer’s markets. Buy from hives as close as possible to where you live and you’ll get the added benefit of exposure to pollens in your area that reduce the likelihood you’ll get sidelined by allergies.

Honey in Food and Society

As it turns out, the cultivation of honey and its use in kitchens and culture is older than written history. 7,000 year old cave dwellings in Spain show pictures of beekeeping. By 2400 BC there was a record of organized beekeeping in Cairo where it was used in embalming and as religious offerings.

Honey was used by Greeks to brew Ambrosia and then, for centuries, by Northern Europeans, like the Celts and Vikings, to make mead. In the middle ages, German feudal lords were paid taxes in both honey and beeswax.

In Boulder County, honey was big business in the late 19th and early 20th centuries. Some of the largest honey producers in Colorado were located here. Local honey production declined about half a century ago.

A lot of people keep bees that you wouldn’t expect.

Maria von Trapp, of The Sound of Music, and novelist Leo Tolstoy were beekeepers, as was the fictional character Sherlock Holmes. Hollywood has its share of beekeepers, too, including Morgan Freeman, the legendary Henry Fonda, and Jennifer Garner.  And, of course, Martha Stewart keeps bees along with everything else she does.

Notable individuals from history participated in honey production, as well, including founding fathers George Washington and Thomas Jefferson, both of whom likely kept them as part of their 18th century estates. The Greek physician Hippocrates kept bees and used honey to treat patients. Join in the historical importance today by, if not becoming a beekeeper, planting bee-friendly gardens and supporting local honey producers.