Off Menu With… Hugo Meyer | Piripi

This past month was the one year anniversary of Piripi, a downtown Erie restaurant that in just under a year, and during a pandemic, has become a staple of the community.

It’s no wonder. Lunch and a cocktail with Piripi’s Chef Hugo Meyer takes you to one of the highest points in Erie and a view of Old Town. It can also take you across continents.

Meyer has a dual passion for bringing international items to local diners and introducing customers to things they may be afraid of trying. Case in point: his Spanish octopus that’s served with dual lemon and chili reductions and featured with a full photo on the homepage of the restaurant’s website.

“People like it, it’s very fun, social,” he said. “Some people never tried octopus. Some people don’t eat spicy food or would never eat a lemon spread. They try our plate and they like it.”

Meyer’s love of travel is infused in the restaurant beyond the menu items, but diners will need to know where to look for it.

Here’s a hint: study the restaurant’s walls. On them are photos he’s taken of international locations. Despite the shots’ clear quality and large scale formats, he rejects the label of ‘amateur photographer’.

“I just like to make pictures. They freeze time. That fraction of a section you take of water, it’s never going to be the same again. You’ve got it right there. A lot of the restaurant is decorated with my pictures of where I have been in the world,” he said, pointing to a photo of the Perito Moreno ice glacier in Patagonia.

The way Meyer sources international ingredients is another reflection of his transcontinental passions. The Patagonian wild red shrimp in his Gambas al Ajillo is carefully sourced and has a natural red color. Prepared simply, garlic infused, and served in a warm clay skillet, It tastes more like small lobster than what diners are used to. “The color is unusual and due to the shrimp’s blood. I’m very happy with the products I’m able to get. I guess that’s part of the success we’re having,” he shared. 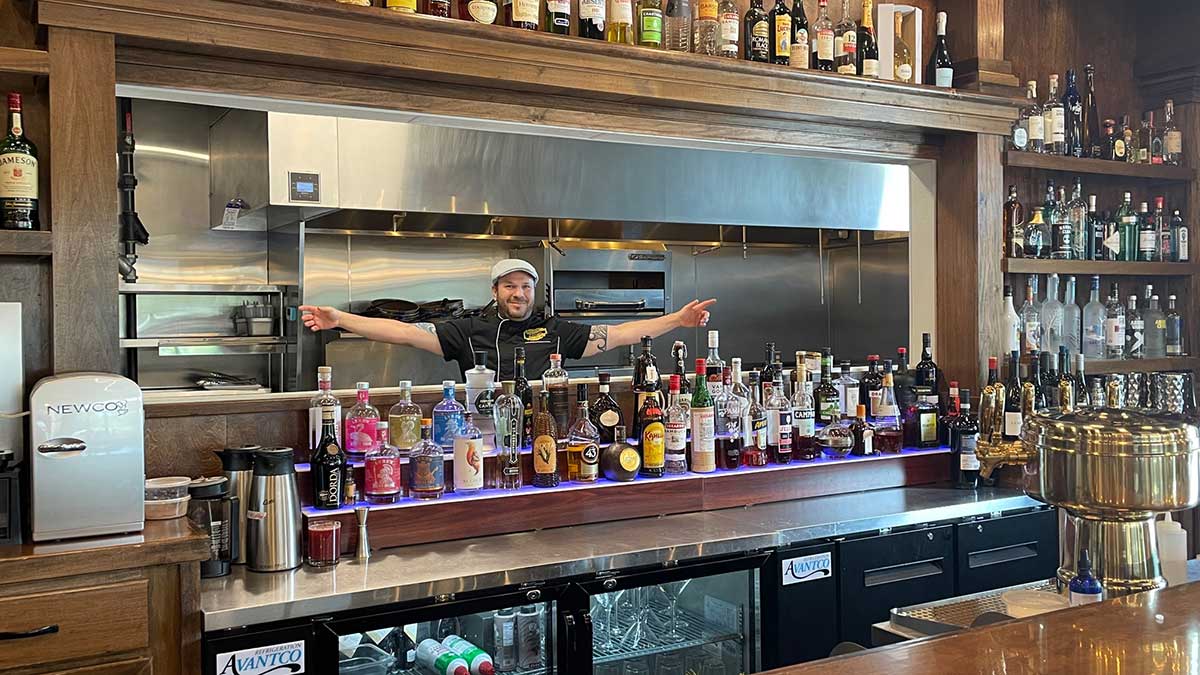 Erie is the latest in a list of international restaurants Meyer has owned or managed. Born to German holocaust survivors who had moved to Cordova, Argentina, he remarked that growing up, “I always cooked in my house. It was a big family with things going on all the time. If you didn’t cook, you didn’t eat.”

Meyer went to Germany at 17 to work at a hotel in a kitchen. “I’m self-taught. I just learned by working. I never went to culinary school but my dad was a chef so I guess I learned from him,” he said.

His resume was furthered in Spain, where he owned his first restaurant with his father. The pair merged Spanish tapas with Argentine cuisine and called their restaurant Carpe Diem, a name that resonated with his lifestyle and he translates to “seize the life” [sic].

He met his wife in Spain and moved with her to a resort her family owned in Belize. There, he sharpened his skills working in two resorts consecutively. He owned the second resort and he served more than 800 customers a day.

“We ran four restaurants from one kitchen,” he said. “We did room service, beach service, and weddings. We downsized when we came to Erie.” In Belize, Meyer’s reputation grew, affording him the chance to showcase the country’s cuisine at Belize’s consulate in Florida where he cooked for Michelle Obama and other dignitaries.

Piripi is the smallest restaurant Meyer has owned but it’s had its challenges, particularly since it opened just over a year ago in the middle of the pandemic. “We flipped a coin. Heads we open, tails we wait. We opened, but being in such a wonderful town of Erie, we were able to make it. We love our customers here.”

The last year has had no shortage of stress, according to Meyer. “We had to transition to delivery right away. Usually restaurants that do that are open for five years.”

But some of his experience getting food to people on the beach at a large resort helped him do take out well. Piripi became known for being able to manage a take out system that helps food survive take out packaging and a car trip to a diner’s kitchen.

Through it all, Meyer is glad to be able to keep doing what he’s been doing. “I was born in restaurants,” he said. “I love it. Period.”