The Math Checks Out | Duly Noted 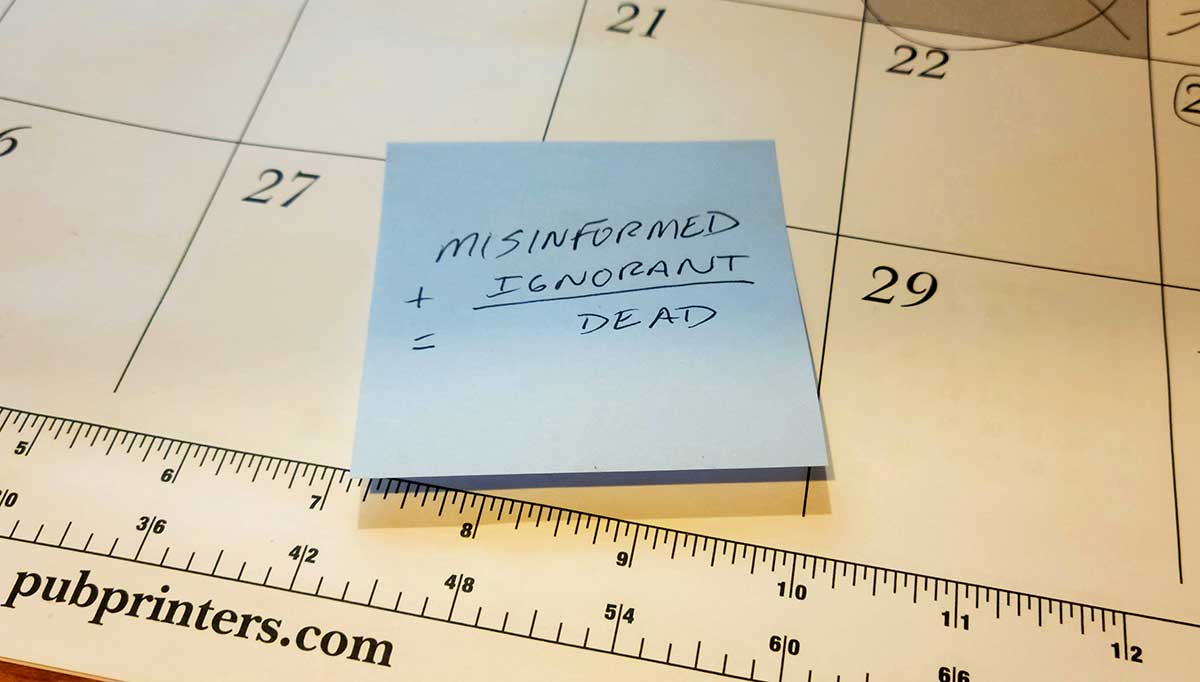 Well, right after we published this column the studies rolled in — actual data compiled among dozens of scientists working in myriad sectors of the healthcare industry regarding COVID-19 vaccinations rates and deaths. And not only was my statement accurate, it’s worse than I thought.

Here are just a couple examples:

• According to the Sept. 17 Morbidity and Mortality Weekly Report from the U.S. Department of Health and Human Services: “Vaccinated people were 10 times less likely to be admitted to hospital and five times less likely to be infected than unvaccinated people… Unvaccinated Americans have died at 11 times the rate of those fully vaccinated since the Delta variant became the dominant strain.” This data was compiled from a study of 13 U.S. States mortality reports.

• According to the California Department of Public Health, Unvaccinated Californians are 15–20 times more likely to die of COVID-19 than those who have been vaccinated.

• According to a non-profit Colorado Health Foundation report published Sept. 14, “Partisan divisions are also quite stark: while 91% of Colorado Democrats say they have gotten at least one dose of a vaccine, among Republicans the figure is only 57%. The data also show that vaccine hesitancy is also transforming into vaccine resistance; among unvaccinated Coloradans, a majority (54%) now say they will ‘definitely not’ get vaccinated.”

And the punchline is well-delivered by the Kaiser Family Foundation, a nonprofit organization focusing on national health issues, as well as the U.S. role in global health policy, in an article published on Sept. 28: “The largest remaining gap (between vaccinated and unvaccinated) is between political partisans, with 90% of Democrats reporting they have gotten at least one dose compared to 58% of Republicans. Sixty-eight percent of independents say they are at least partially vaccinated.”

The pure, unbridled cynicism of Republican pundits and politicians is nothing short of murderous. The vast majority — maybe even all of them? — are vaccinated themselves. But instead of working together across party lines in a fight that should unite all Americans — indeed all humans on Earth — the GOP has taken a stand on a soapbox built of the bodies of its own constituency.

That this fight against COVID-19 has become so politically polarized is an utter and complete farce. It’s demonstrated just how utterly bereft of anything resembling basic human decency the Republican party finds itself. The GOP has completely abandoned honor and patriotism, two fundamental platforms they like to pretend to embrace.

The message to the GOP voter base across the nation is clear as day: The GOP thinks you’re incapable of understanding basic math. The GOP thinks your susceptibility to ridiculous conspiracy theories is high. The GOP would rather you died in rage-fueled ignorance than lived a long life with your family.

The GOP thinks your vote is, quite simply, worth more than your own life.